The Trikaya doctrine (Sanskrit, meaning "Three Bodies" of the Buddha) refers to an important Mahayana Buddhist teaching about the nature of the Buddha. According to this doctrine, the Buddha has three kayas, or bodies, which are said to be manifested in different ways: 1) the nirmanakaya (created body), which appears in time and space; 2) the sambhogakaya (mutual enjoyment body), which is an archetypal manifestation; and, 3) the Dharmakaya (reality body), which embodies the very principle of enlightenment knowing no limits or boundaries.

The Trikaya doctrine became an important part of Mahayana teaching as a mechanism to reconcile the various and potentially conflicting teachings about the Buddha found in Buddhist texts. As with earlier Buddhist thought, all three forms of the Buddha teach the same Dharma, but take on different forms to expound the truth.

It is an interesting historic fact that the number three has positive symbolic resonance across different cultures and religions. Not only Buddhism speaks of the three bodies of the Buddha, but Christians also talk of the Trinity, while Hindus speak of the Trimurti (the three main forms of God).

Buddhism has always recognized the existence of more than one Buddha throughout time. The early Buddhist scriptures known as the Pali Canon mention twenty-eight previous Buddhas stating that Gautama Buddha, the historical Buddha, is simply the one who has appeared in our world age.

During the Buddha's life great reverence and veneration was shown towards him by persons from the highest to the lowest social classes. The Buddha understood that this veneration was sometimes misguided based on superficialities and appearances and he warned people against turning him into an object of worship. Thus he forbade carvings and sculptures that represented his physical form. Nonetheless, a mythology developed concerning the physical characteristics of Universal Buddhas. In the Pali scriptures it is claimed that all Buddhas have the 32 major marks, and the 80 minor marks of a superior being. These marks are not necessarily physical, but are talked about as bodily features. They include the 'ushinisha' or a bump on the top of the head; hair tightly curled; a white tuft of hair between the eyes, long arms that reach to their knees, long fingers and toes that are webbed; his penis is completely covered by his foreskin; images of an eight-spoke wheel on the soles of their feet, forty teeth, etc. Clearly if these were physical marks the Buddha would have been a strange looking individual. Yet since not everyone was able to discern these marks on him, we can assume that they were either metaphorical, or a psychic phenomenon.

The antecedents of the Mahayana Trikaya doctrine appear in the Pali Canon when Gautama Buddha tells Vasettha that the Tathagata (the Buddha) was Dharmakaya, the 'Truth-body' or the 'Embodiment of Truth', as well as Dharmabhuta, 'Truth-become', that is, 'One who has become Truth' (Digha Nikaya). Thus even before the Buddha's Parinirvana the term Dharmakaya was current. Dharmakaya literally means Truth body, or Reality body. On another occasion, Ven. Vakkali, who was ill, wanted to see the Buddha before the passed away from old age. The text from the Samyutta Nikaya (SN 22.87) is as follows:

This distinction was between the Buddha's physical body (rupakaya) and his Dharmakaya aspect continued after his death. Since the Buddha told Vakkali that he was a living example of the 'Truth' of the Dharma, without a physical form to relate to, the Buddha's followers could only relate to the Dharmakaya aspect of him. Despite the growth of the Stupa cult in which the remains, or relics, of enlightened beings were worshipped, Mahayana Buddhists were concerned with the transcendent aspect of the Dharma. Eventually, the Trikaya doctrine was first expounded in the Saddharma Pundarika Sutra (The Lotus Sutra), composed in the first century B.C.E. It was posited that if the Dharma is transcendental, totally beyond space and time, then so is the Dharmakaya. One response to this was the development of the Tathagatagarbha doctrine. Another was the introduction of the Sambhogakaya, which conceptually fits between the Nirmanakaya (which is what the Rupakaya came to be called according in the Buddhist Canon) and the Dharmakaya. The Sambhogakaya is that aspect of the Buddha, or the Dharma, that one meets in visions and in deep meditation. It could be considered an interface with the Dharmakaya. What it does, and what the Tathagatagarbha doctrine also does, is bring the transcendental within reach, it makes it immanent. 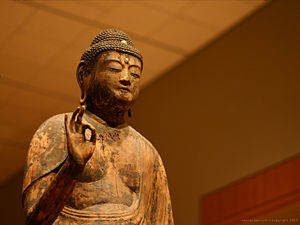 In Mahayana Buddhism, Gautama Buddha is considered to be a manifestation of the nirmanakaya (physical-spatial body of the Buddha).

1. The Nirmanakaya (Sanskrit: "Created Body") refers to the actual physical Buddha(s) who have existed on earth. Typically, the Nirmanakaya denotes the historical Gautama Buddha, the last recorded Buddha. This level/body is also sometimes called the Putikaya (meaning "decomposing" body) denoting the material body of the Buddha that was used to teach and was present amongst humanity, but was subject to decay (Samyutta Nikaya).

2. The Sambhogakāya (Sanskrit: "body of enjoyment") is the supramundane form of a fully enlightened Buddha following the completion of his career as a Bodhisattva. This body is an idealized form, similar to that seen in Buddhist iconography and in meditational visualizations, of a human figure manifesting all of the thirty-two marks of a Buddha. The place where the Sambhogakāya body appears is an extra-cosmic realm called Akaniṣṭha, similar to but perhaps distinct from the Akaniṣṭha that is the highest realm of the Śuddhāvāsa devas.

3. The Dharmakaya (Sanskrit: "Truth Body" or "Reality Body") is a central concept in Mahayana Buddhism forming part of the Trikaya doctrine that was first expounded in the Saddharma Pundarika Sutra (The Lotus Sutra), composed in the first century B.C.E. It constitutes the unmanifested aspect of a Buddha out of which Buddhas and indeed all phenomena arise and to which they return after their dissolution. Buddhas are manifestations of the Dharmakaya called Nirmanakayas. Unlike ordinary unenlightened persons, Buddhas (and arhats) do not die (though their physical bodies undergo the cessation of biological functions and subsequent disintegration). In the Lotus Sutra (sixth fascicle) Buddha explains that he has always and will always exist to lead beings to their salvation. This eternal aspect of Buddha is the Dharmakaya. The Dharmakaya may be considered the most sublime or truest reality in the Universe corresponding closely to the post-Vedic conception of Brahman and that of the Father in the Christian Trinity.

As with earlier Buddhist thought, all three forms of the Buddha teach the same Dharma, but take on different forms to expound the truth.

The various Buddhist schools hold some varying interpretations on the nature of Buddha.

From the Pali canon emerges the view that Buddha was human, endowed with the greatest psychic powers (Kevatta Sutta). The body and mind (the five Skandhas) of a Buddha are impermanent and changing, just like the body and mind of ordinary people. However, a Buddha recognizes the unchanging nature of the Dharma, which is an eternal principle and an unconditioned and timeless phenomenon. This view is common in the Theravada school, and the other early Buddhist schools.

Since Buddhahood is open to all, the Buddhist scriptures distinguish various types or grades of Buddhas.

In the Pali canon of Theravada Buddhism, there are considered to be two types of Buddhas: Samyaksambuddha (Pali: Sammasambuddha) and Pratyeka Buddha (Pali: Paccekabuddha).

Samyaksambuddhas attain Buddhahood and decide to teach others the truth that he or she has discovered. They lead others to awakening by teaching the dharma in a time or world where it has been forgotten or has not been taught before. The Historical Buddha, Siddhartha Gautama, is considered a Samyaksambuddha.

Pratyekabuddhas, sometimes called “Silent Buddhas,” are similar to Samyaksambuddhas in that they attain Nirvana and acquire the same powers as a Sammasambuddha does, but they choose not to teach what they have discovered. They are second to the Buddhas in their spiritual development. They do ordain others; their admonition is only in reference to good and proper conduct (abhisamācārikasikkhā).

The Eternal Buddha in Mahayana Buddhism

Some schools of Mahayana Buddhism believe that the Buddha is no longer essentially a human being but has become a being of a different order altogether, and that the Buddha, in his ultimate transcendental "body/mind" mode as Dharmakaya, has an eternal and infinite life. In the Mahaparinirvana Sutra, the Buddha declares that "the Tathagata [Buddha] is eternally abiding and unchanging."[3] This is a particularly important metaphysical and soteriological doctrine in the Lotus Sutra and the Tathagatagarbha sutras. According to the Tathagatagarbha sutras, failure to recognize the Buddha's eternity and—even worse—outright denial of that eternity, is deemed a major obstacle to the attainment of complete awakening (bodhi). Later Mahayana Buddhists were concerned with the transcendent aspect of the Dharma. The Three Bodies of the the Buddha in Mahayana thought can be broken down like so:[4]

Some scriptures of Mahayana Buddhism (and one twelfth-century Theravadin commentary) distinguish three types of Buddhas. The third type, called a Shravakabuddha, describes the enlightened disciple.

Shravakabuddhas (Pali: Savakbuddha or Anubuddha) are disciples of a Sammasambuddha, meaning shravakas (hearers or followers) or arhants (noble ones). These terms have slightly varied meanings but can all be used to describe the enlightened disciple. Anubuddha is a rarely used term, but was used by the Buddha in the Khuddakapatha as to those who become Buddhas after being given instruction. Enlightened disciples attain Nirvana just as the two types of Buddhas do. However, the most generally used term for them is “arhant.”

In this case, however, the common definition of the meaning of the word Buddha (as one who discovers the Dhamma without a teacher) does not apply anymore.