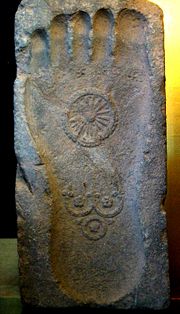 In early Buddhism, the historical Buddha was often represented by the simple image of his footprint, in order to discourage iconolatrous worship. His oft-quoted practice of referring to himself in the third-person (as "the Tathāgata") emerges from a similar impulse: namely, to minimize the significance of his earthly incarnation (as per the doctrine of impermanence).

Tathāgata (from: Pali/Sanskrit meaning "thus gone; thus arrived"),[1] is a common epithet for the Buddha used in many Buddhist scriptures. In the Pali canon, for example, Siddhartha is often depicted saying "the Tathagata is..." instead of "I am...," which has been taken by later commentators as an indication that he had passed beyond the attachments (trishna) of human ego consciousness into a full embodiment of the doctrine of anatman.[2]

Despite the relative ubiquity of the term, its precise definition has been contested by the various schools of Buddhism that developed in the years following the master's death. Though the original expression could be literally translated as either "one who has come" (from tathā-āgata) or "one who has gone" (from tathā-gata), the Theravada and Mahayana schools each proposed idiosyncratic interpretations based upon the metaphysical nuances particular to their respective schools.[3]

As suggested above, the term tathagata is derived from one or more of the following Pali/Sanskrit phrases: tathā-āgata ("one who has come"); tathā-gata ("one who has gone"); or Tat-āgata ("one who has gone to That [Ultimate Reality]").[4] In addition, Hopkins' detailed philological accounting for the term, which examines many prior usages in Indian epic poetry, notes that term is often used to describe an individual in dire straits or one who has actually died.[5] While this fruitful ambiguity was undoubtedly central to the concept's metaphysical appeal, it also opened the proverbial door to the various conflicting interpretations that have emerged in the intervening years.

While the first two of these etymologies are relatively straight-forward (with the first describing an individual who has "arrived" among his human constituents (much like the mythological Buddhas that preceded him) and the second suggesting an individual who was transcended the cycle of samsara),[6] elucidating the third requires a brief digression into the metaphysical system outlined in the Hindu Upanishads. Specifically, the third etymology suggests that the term is a compound of two simple components: Tat and āgata. The verbal component, āgata, is simply the past participle of gata (going, traveling, trekking), which in this context can be defined as "arrival, gone-unto, attainment of, arrival-at." Unlike this fairly pedestrian verb, Tat, the nominal component of the compound, is a storied term that has signified Brahman (Absolute Reality) in Hindu metaphysics from time immemorial, as in the famous Upanishadic dictum: "That (Brahman) thou art" (Tat tvam asi: Chandogya Upanishad). As such, "Tathagata" in the ancient Prakrit Pali could literally be read as "(The sage who has) arrived at the Absolute"—an interpretation that was elaborated upon extensively by the Mahayana school.[7]

In the Pali Canon

For faithful of the Theravada tradition, the notion of the Buddha as Tathagata resonates with many of their metaphysical, cosmological, and soteriological views. First, in keeping with the idea of the arhat as moral ideal (and specifically with the notion that it was only through this path that one could be freed from the cycle of samsara), many references to the Tathagata in Pali sources simply describe the enlightened being's relationship with the mortal realm:

This section goes on to explain that the Buddha's ontological/soteriological status ceases to be a concern for anyone who has the correct attitude towards material reality (the skandhas) and human emotions (such as craving, clinging or striving). Despite this, the passage does offer a genuine conclusion to its adherents, as it emphatically states that "[w]hen a monk has been freed from the classification of craving, there exists no cycle for describing him."[8]

In this context, the term seems deliberately ambiguous, reflecting the ineffable ontological status of a fully liberated human being, where some would say that such a one has attained True Being (Sat); others that the liberated soul has transcended categories of being and non-being. Thus, tathāgata reflects these ambiguities by having no fixed (or fixable) meaning. This interpretation is strengthened through its evident parallels with existing understandings of spiritual attainment. For instance, the Dhammapada describes the actions of an arhat as "without trace" (ananuvejja) or "trackless" (apada), "like the birds in the sky" (ākāse'va sakuntānam gati tesam durannayā).[9] Similarly, the Mahabharata contains a verse which states: "Just as the footprint of birds flying in the sky and of fish swimming in the water may not be seen, so is the going of those who have realised the truth" (tathā jñānavidam gatih).[10] In this manner, the moniker Tathāgata evokes the indefinable, ineffable quality of one who has arrived at the truth.[11]

Another common Theravadin interpretation is that tathāgata means 'one who comes and goes' (in the same manner as all the Buddhas). This understanding comes from early Buddhist mythology, where Sakyamuni Buddha is seen as one of a line of historical Buddhas who have descended from Tusita heaven to enlighten humanity. To this end, the Sutta Nipata records the following exchange:

"Neither has before been seen by me,"—so said the venerable Sâriputta,—"nor has any one heard of such a beautifully-speaking master, a teacher arrived from the Tusita heaven"[12]

In the Mahayana Tradition

While the understandings of the Tathagata forwarded by the Pali literature tend to focus on the ontological status of the Buddha, the later Mahayana approaches tend to be firmly situated within their complex metaphysical discourse. In this context, the tathagata attains cosmological importance through an identification with the ultimate nature of reality: "The Mahayana Schools prefer: one who has attained full realization of Suchness (tathata); i.e., become one with the absolute (Dharmakaya), so that he 'neither comes from anywhere, nor goes anywhere.'"[13]

The Mahayana position is eloquently summarized in the Encyclopedia of Eastern Philosophy and Religion:

In the Mahayana the tathagata is the Buddha in his nirmanakaya aspect. He is both the perfected man who can take on any form and disposes of the ten powers of the buddha and the cosmic principle, the essence of the universe, the unconditioned. He is the intermediary between the essential and the phenomenal world. In the absolute sense, tathagata is often equated with prajna and sunyata.[14]

Retrieved from https://www.newworldencyclopedia.org/p/index.php?title=Tathagata&oldid=703020
Categories:
Hidden category:
This page was last edited on 6 May 2008, at 21:16.
Content is available under Creative Commons Attribution/Share-Alike License; additional terms may apply. See Terms of Use for details.