This article is about the asterism. 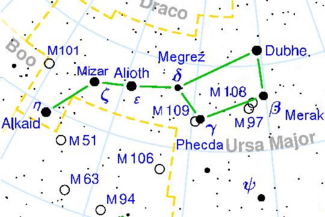 In astronomy, the Big Dipper refers to an asterism that consists of the seven brightest stars of the constellation Ursa Major, or the Great Bear. This asterism has been recognized as a distinct grouping in many cultures from time immemorial, although it has been called by different names. The term Big Dipper is derived from the outline of the major stars, an outline that suggests the form of a large ladle or dipper.

The flag of the state of Alaska features a stylized Big Dipper and North Star.

As noted above, this asterism is known as the Big Dipper because the major stars can be seen to follow the rough outline of a large ladle or dipper. This figuration appears to be derived originally from Africa, where it was sometimes seen as a drinking gourd. In the nineteenth century, runaway slaves would "follow the Drinking Gourd" to the north and freedom.

A widespread American Indian figuration had the bowl as a bear. Some groups considered the handle to be three cubs following their mother, while others pictured three hunters tracking the bear. (For example, see Abenaki mythology.) The Dipper appears on some Tribal flags.

In the British Isles this pattern is known as the Plough, although in Ireland the figure is sometimes called the Starry Plough and has been used as a political symbol. It is also occasionally referred to as the Butcher's Cleaver in northern England. 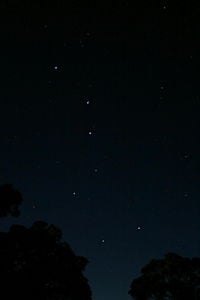 The Big Dipper seen from Kauai.

It was formerly called by the old name Charles' Wain ("wain" meaning "wagon," and derived from the still older Carlswæn) as it still is in Scandinavia, Karlavagnen, Karlsvogna, or Karlsvognen. A folk etymology holds that it was named after Charlemagne, but this common Germanic name originally meant the men's wagon (the churls' wagon), in contrast to the women's wagon (the Little Dipper). Similarly, in Romanian and most Slavic languages it is known as "the Great Wagon," as opposed to "the Small Wagon," the Little Dipper. In German it is called Großer Wagen (Great Cart). An older Odin's Wain may lie behind these northern concepts.

In Finland the figure is known as Otava and widely used as a cultural symbol. In Finnish dialects, the word otava means a "salmon net," but this word is largely obsolete in modern Finnish.

These seven stars ("Septentrio") are the origin of the Latin word septentriones meaning "north" and now found as the adjective septentrional (northern) in English, French, and Spanish.

In Hindu astronomy, it is referred to as (Vrihat) Sapta Rishi meaning "The Seven (Great) Sages."

Sometimes there are said to be nine stars—two invisible "attendant" stars, one on either side of the star Alkaid. These probably refer to two nearby Messier objects.

In Malaysia,it is known as Buruj Biduk (The Ladle).

An Arabian story has the four stars of the dipper's bowl as a coffin, with the three stars in the handle as mourners, following it.

In the manga series, Fist of the North Star (Hokuto no Ken), the Hokuto in the original Japanese title refers not to the North Star in the official English title, but to the Big Dipper instead (Hokuto literally means Northern Dipper). The main character, Kenshiro, bears seven scars on his chests that forms the same shape as the Big Dipper. The Big Dipper itself or Hokuto Shichisei is a recurring symbolism in the series. 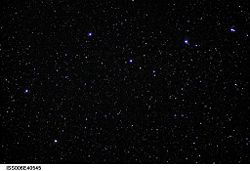 The Big Dipper's bowl and part of the handle photographed from the International Space Station. Mizar and Alcor are at the upper right.

Within Ursa Major the stars of the Big Dipper have Bayer designations in consecutive Greek alphabetical order from the bowl to the handle.

In the same line of sight as Mizar, but three light-years beyond it, is the star Alcor (80 UMa). Together they are known as the Horse and Rider. At fourth magnitude, Alcor would normally be relatively easy to see with the unaided eye, but its proximity to Mizar renders it more difficult to resolve, and it has served as a traditional test of sight. Mizar itself has four components and thus enjoys the distinction of being part of an optical binary as well as containing the first-discovered telescopic binary (1617) and the first-discovered spectroscopic binary (1889).

Five of the stars of the Big Dipper are at the core of the Ursa Major Moving Group. The two at the ends, Dubhe and Alkaid, are not part of the swarm, and are moving in the opposite direction. Relative to the central five, they are moving down and to the right in the map. This will slowly change the Dipper's shape, with the bowl opening up and the handle becoming more bent. In 50,000 years the Dipper will no longer exist as we know it, but be re-formed into a new Dipper facing the opposite way. The stars Alkaid to Phecda will then constitute the bowl, while Phecda, Merak, and Dubhe will be the handle. 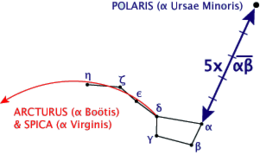 Not only are the stars in the Big Dipper easily found themselves, they may also be used as guides to yet other stars:

Additionally, the Dipper may be used as a guide to telescopic objects: