This article is about the Sioux chief also known as Spotted Elk. For the legendary creature see Sasquatch 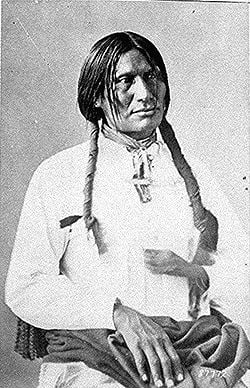 Though skilled in war, he was known as a great man of peace, adept at settling quarrels between rival parties. Known for his political and diplomatic successes, he was often called upon to mediate disputes. Following their defeat during the War for the Black Hills, he encouraged his people to live in peace, and to adapt to the white men’s ways while retaining their native language and cultural traditions. He encouraged them to adapt to life on the reservation by developing sustainable agriculture and building schools, taking a peaceful attitude toward white settlers.

This makes all the more tragic the circumstances of his death. Sick with pneumonia, he was enroute to the Pine Ridge Reservation, seeking shelter with Red Cloud's band. Apprehended, he became a victim of the Wounded Knee Massacre (1890) in which nearly 300 men, women and children of his tribe lost their lives.

Big Foot—Si Tanka in his native tongue—was born the son of a chief between 1820 and 1825 into the Minneconjou subgroup of the Teton Lakota (Sioux). The Minneconjou ("Planters by the River"), lived in northwestern South Dakota with the Hunkpapa band, which was led by Sitting Bull.

The Sioux were a broad alliance of Native American people, divided into three groups, the Santee, Yankton, and Teton. The Teton were further divided into seven subgroups: the Sihasapa; Brulé (Upper and Lower); Hunkpapa; Minneconjou; Oglala; Sans Arcs; and Oohenonpa.[1] For centuries the Sioux lived on the prairies of western Minnesota and the Dakotas. They migrated into and across the Missouri River valley during the eighteenth century.

Accounts of Big Foot, also known as Spotted Elk, describe him as a great hunter and skilled horseman. He reportedly possessed a string of fine ponies, most probably obtained from the Crow or other enemies. When Lone Horn, Si Tanka's father, died in 1875, Si Tanka became chief of the Minneconjou.

As Chief, Big Foot was considered a great man of peace and was best known among his people for his political and diplomatic successes. He was skilled at settling quarrels between rival parties and was often in great demand among other Teton bands.

During the 1870s, he allied himself with Sitting Bull and Crazy Horse (together with Touch the Clouds) against the United States Army, but saw no major action during the war in 1876-1877. The Minneconjou suffered during the War for the Black Hills, after which they surrendered. Following the defeat of the Sioux, Big Foot urged his followers to adapt to the white men’s ways while retaining their native language and cultural traditions.

Following the Sioux Wars, the government placed the Minneconjou on the Cheyenne River Indian Reservation in South Dakota. Being a person accustomed to finding ways of reconciling opposing views, Big Foot sought means to adjust to white ways. He encouraged his people to adapt to life on the reservation by developing sustainable agriculture and building schools for Lakota children. Big Foot was among the first Native Americans to raise corn in accordance with government standards. Big Foot also advocated that his people take a peaceful attitude toward white settlers.

Participation in the Ghost Dance movement

The flood of white settlers into the area of the Dakotas overwhelmed the Lakota. The 1870s gold rush in the Dakota Territory's Black Hills brought hordes of prospectors and settlers.

The Sioux, who were traditionally a hunter-gatherer society, were expected to farm their allotted land. However, the semi-arid region of South Dakota did not support agriculture well. The Sioux, deprived of their culture and traditional ways of life, soon also found themselves without food or means of procuring it.

To help support the Sioux during the period of transition, the Bureau of Indian Affairs (BIA) was delegated the responsibility of supplying them with food. By the end of the 1890 growing season, a time of intense heat and low rainfall, it was clear that the land was unable to produce substantial agricultural yields. Unfortunately, this was also the time when the government decided to cut rations to the tribes in half. With the bison virtually eradicated from the plains a few years earlier, the Sioux began to starve. The Lakota, in a state of great despair, began to look to a radical solution to their on-going problems.

The radical solution came in the form of "the Ghost Dance," a religious movement that began in 1889 and was readily incorporated into numerous Native American belief systems. At the core of the movement was the visionary Indian leader Jack Wilson, known as Wovoka among the Paiute. Wovoka prophesied an end to white American expansion while preaching messages of clean living, an honest life, and peace between whites and Indians.

The practice swept throughout much of the American West, quickly reaching as far as California, Oklahoma and Dakota Territory. As it spread from its original source, Native American tribes synthesized selective aspects of the ritual with their own beliefs, creating changes in both the society that integrated it and the ritual itself. Big Foot and the Lakota were among the most enthusiastic believers in the Ghost Dance ceremony when it arrived among them in the spring of 1890.

The Dance took on a more militant character among the Sioux who were suffering under the disastrous United States government policy that had sub-divided their original reservation land and forced them to turn to agriculture. By performing the Ghost Dance, the Lakota believed they could take on a "Ghost Shirt" capable of repelling the white man's bullets.

Although United States government-imposed reservation rules outlawed the practice of the religion, the movement swept like a wild fire through their camps, causing local Indian agents to react with alarm. Some agents successfully suppressed the dancers; others called for federal troops to restore order. Seeing it as a threat and seeking to suppress it, some of the agents initiated actions that tragically culminated with the death of Sitting Bull.

On December 15, 1890, an event occurred that set off a chain reaction ending in the massacre at Wounded Knee. Chief Sitting Bull was killed at his cabin on the Standing Rock Reservation by Indian police who were trying to arrest him on government orders. Sitting Bull was one of the Lakota’s tribal leaders, and after his death, refugees from his tribe fled in fear. They joined Sitting Bull's half brother, Big Foot, at a reservation at Cheyenne River.

Unaware that Big Foot had renounced the Ghost Dance, General Nelson Miles ordered him to move his people to a nearby fort. On December 28, Big Foot, who had been suffering from pneumonia, became seriously ill. His tribe then set off to seek shelter with Chief Red Cloud at the Pine Ridge reservation. Big Foot’s band was intercepted by Major Samuel Whitside and his battalion of the Seventh Cavalry Regiment and were escorted five miles westward to Wounded Knee Creek. There, Colonel James W. Forsyth arrived to take command and ordered his guards to place four Hotchkiss guns in position around the camp. The soldiers numbered around 500—the Indians, 350; all but 120 were women and children.

On the morning of December 29, Big Foot, who was by this time extremely sick, sat with his warriors. The soldiers had orders to escort them to the railroad for transport to Omaha, Nebraska, and were ordered to disarm them before proceeding. The Lakota were ordered to surrender their weapons, but only a few were recovered. Tension mounted when a medicine man, Yellow Bird, began to perform the Ghost Dance.

Shooting broke out near the end of the disarmament, and accounts differ regarding who fired first and why. One account states that a scuffle broke out between a soldier trying to disarm a deaf Indian, Black Coyote. He had not heard the order to turn in his gun and assumed he was being charged with theft. Another account reports that the mistaken gestures of the medicine man—throwing dust into the air—were misunderstood as a signal to attack.

Soon volley after volley were being fired into the camp. As the Indians scattered the cannons began to be shot, shredding tipis. Many of the men, women and children ran for cover in a ravine next to the camp only to be cut down in a withering cross fire.

By the end of fighting, which lasted less than an hour, approximately 300 Sioux lay dead, Big Foot among them. It is said by some that around 150 Lakota fled the chaos, of which many likely died from exposure. According to General Nelson Miles, the official reports listed the number killed at 90 warriors and approximately 200 women and children.

In comparison, army casualties numbered 25 dead and 39 wounded. Forsyth was later charged with the killing of innocents but was exonerated.

In a letter to the Commissioner of Indian Affairs from General Nelson A. Miles, dated March 13, 1917, he states:

"The action of the Commanding Officer, in my judgment at the time, and I so reported, was most reprehensible. The disposition of his troops was such that in firing upon the warriors they fired directly towards their own lines and also into the camp of the women and children. and I have regarded the whole affair as most unjustifiable and worthy of the severest condemnation."[2]

The respected chief, Big Foot, was among the first killed. His frozen corpse, half raised as though trying to warn his people of their imminent disaster, lay untouched for three days until it was unceremoniously dumped into a mass grave.[3]