Red Cloud (Lakota: Makhpiya Luta), (1822 – December 10, 1909) was a war leader of the Oglala Lakota (Sioux). He emerged as a leader among his people at their most dramatic and tragic time in history, when their traditional ways of life were being destroyed by the westward expansion of white settlers.

One of the most capable Native American opponents the United States military ever faced, he fought and won the most successful war an Indian nation ever waged against them, a two-year ordeal that became known as "Red Clouds War," which secured native rights to the Powder River Country in northwestern Wyoming and southern Montana. Later, he traveled to Washington, D.C. and successfully won concessions to a previously signed (though misunderstood) treaty.

Initially Red Cloud stood alongside some of the most defiant Native American chiefs of the day; Sitting Bull, Crazy Horse, Crow King, and Gall, to name a few. However it eventually became clear, as it did to others before him, that resistance was not only futile but deadly. Adopting a policy of negotiation, he began to try to balance both the white and Indian worlds, seeking the best for his people. The final 30 years of his life were spent on the reservation, where he continued to fight for his peoples' rights.

He outlived the other major Sioux leaders of the Indian wars and died in 1909 at the age of 87 on the Pine Ridge Reservation in South Dakota, where he is buried. Almost entirely blind in his final years, he stood as a symbol of strength to his people until his death and beyond.

Red Cloud (Makhpiya Luta) was born near the forks of the Platte River near what is now the city of North Platte, Nebraska. His parents were both Sioux, though his mother, Walks-as-She-Thinks, was of the Oglala band and his father, Lone Man, was a Brulé. His father died while he was young; he was raised in the household of his maternal uncle, Chief Smoke.

It is not known from where he got his name. Some sources say that it was a family name used by his father and grandfather before him. Other sources contend that it was given him as a description of the way his "scarlet-blanketed warriors covered the hills like a red cloud."[1]

An accomplished horseman from his early years, he became an adept and brave hunter. Red Cloud spent much of his early life at war, mainly against neighboring tribes. It's recorded that in 1841 he killed one of his uncle's primary rivals, an event which divided the Oglala for the next 50 years.[2] His leadership in territorial wars against the Pawnee, Crow, Ute, and Shoshone gained him not only military experience, but prominence within the Sioux nation as a great warrior.

Around the age of 20 years, Red Cloud married Pretty Owl. The diaries of Ohiyesa (Charles A. Eastman) state that was faithful to one wife all his days, even though it was acceptable for prominent Sioux to take more than one wife. He is believed to have fathered five children to whom he was greatly devoted, especially his only son, Jack Red Cloud, whom he counseled to become a great warrior. His private life was deemed exemplary. In an 1851 treaty at Fort Laramie, the Sioux (among other tribes) had agreed on terms by which the United States might establish limited roads and military posts on traditional Indian land. [3]

By 1865, Red Cloud was one of many Indian leaders who believed the U.S. was breaking the treaty by establishing forts farther up the Bozeman Trail than had been agreed upon by treaty. They had seen other tribes expelled from their land and were determined to resist.

In June 1865, Red Cloud's Sioux joined a coalition led by Woqini (Roman Nose) of the Cheyenne to attack a military post on the North Platte River. Believing they had taught the bluecoats to respect the treaty, they returned home only to learn in August of further encroachments. The U.S. Army was constructing forts along the Bozeman Trail straight through Lakota territory (modern-day Wyoming), from the South Platte River in Colorado to Montana's gold country. Red Cloud foresaw the eventual expulsion of the Lakota from their land.

Several Sioux leaders signed a treaty in the spring of 1866 that would open up the Bozeman Trail, but Red Cloud and his many followers held out, insisting on the removal of soldiers.[1] Soon, what was to become known as Red Cloud's War began, the most successful war an Indian nation ever waged against the United States military.

The war lasted from 1866 to 1868, and ended with the Treaty of Fort Laramie, by which the United States abandoned all forts on the Bozeman Trail and acknowledged Lakota possession of what is now the Western half of South Dakota, including the Black Hills, and much of Montana and Wyoming. Considered a completed victory for the Sioux, it granted temporary preservation of their control of the Powder River country. 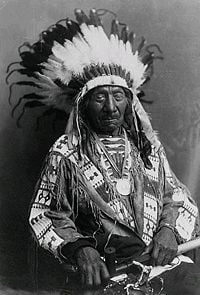 Uneasy relations between the expanding United States and the natives continued, with more and more bands being relegated to reservations.

In 1871, Red Cloud was informed that he would be a welcome visitor to the "Great Father's house in Washington." Red Cloud, for two reasons, decided to accept the invitation. First, he welcomed the opportunity to tell the president himself that his people did not want reservation life, but rather wanted to freely live on their traditional lands in the traditional manner. Secondly, he had heard of the Indian Commissioner, Ely S. Parker (the Iroquois Donehogawa) and wanted to see for himself if this was truly an Indian man who could not only speak the white man's language, but read and write it as well.[3]

Red Cloud selected a delegation of 15 men who traveled with him by train to the American capital. Upon arrival they were surprised to find Spotted Tail and a delegation of Brule. These two chiefs had become rivals, as Spotted Tail had seemed to be too easily accepting of the white man's direction and had accepted removal to an agency on the Missouri River. While on this trip the two reconciled as Spotted Tail confided his hatred of reservation life and his desire to return to the Nebraska plains.

Red Cloud demanded, and won, concessions to the treaty. Believing that the interpreters whom he had dealt with in the Sioux territory had not been truthful, he refused to accept what had been signed in the Treaty of 1868. Though the Powder River country was not inside the permanent reservation land, it was part of their officially recognized hunting grounds. As Red Cloud held his grounds, they were told by Secretary of the Interior Jacob Cox, that they could live upon the hunting grounds if they preferred.

In 1871, the Red Cloud Agency was established on the Platte River, downstream from Fort Laramie. As outlined in the Treaty of 1868, the agency staff were responsible for issuing rations to the Lakota weekly as well as providing the annual annuity goods.

In the fall of 1873, with his friend Donehogawa forcefully retired from his protective position in Washington, the Red Cloud Agency was removed to the upper White River in northwestern Nebraska. Spotted Tail and his band of Brule were moved to the same area. Camp Robinson was established nearby, which would plague both agencies in the years ahead.

Red Cloud settled at the agency with his band by the fall of 1873. In 1874, General George Custer led a reconnaissance mission into Sioux territory that reported gold in the Black Hills, an area sacred to the Natives. This brought war to the northern plains, which would eventually mean the end of independent Indian nations.

Formally, the Army tried to keep miners out, but with little true effort. With the onslaught of miners and settlers, the threat of violence grew. Red Cloud, along with other leaders, rejected a treaty ceding the territory, but were unsuccessful in finding a peaceful solution.

Soon the Black Hills War of 1876-1877 (also known as the Great Sioux War or Little Big Horn Campaign) erupted, led by Crazy Horse, Sitting Bull and other war leaders. For an unknown reason Red Cloud did not join in this campaign. It is commonly speculated that by this time Red Cloud understood the futility of war and decided to invest himself in fighting administratively for the needs and autonomy of his people.

In the fall of 1877, Red Cloud was surrounded by United States troops under the command of Colonel McKenzie, who disarmed his people and brought them into Fort Robinson, Nebraska. The following year they were removed to the Pine Ridge Reservation, where Red Cloud spent his final 30 years as a "reservation Indian."

Red Cloud continued fighting for his people, even after being forced onto the reservation. He struggled with reservation agent Valentine McGillycuddy over the distribution of food and supplies, eventually obtaining his dismissal.[2]

He openly opposed the Dawes Act of 1887, which allotted tribal lands to individuals. Red Cloud understood the negative impact this would have on the unity, self-government, and culture of the native peoples. It was viewed as a thinly-veiled disguise in the hoped assimilation process of the native people.

In 1889 he opposed a treaty to sell more of the Sioux land; his steadfastness and that of Sitting Bull required the government agents to obtain the necessary signatures through subterfuges such as obtaining the signatures of children.

Red Cloud never openly endorsed the Ghost Dance movement, which eventually brought on the deaths of the great chiefs Sitting Bull and Big Foot. Though some believed he privately endorsed it, nothing could be proved against him.

He remained an important leader of the Sioux as they transitioned from the freedom of the plains to the confinement of the reservation system. He outlived the other major Sioux leaders of the Indian wars and died in 1909 at the age of 87 on the Pine Ridge Reservation, where he is buried. Almost entirely blind in his final years, he stood as a symbol of strength to his people until his death and beyond.

Retrieved from https://www.newworldencyclopedia.org/p/index.php?title=Red_Cloud&oldid=1090930
Categories:
Hidden category:
This page was last edited on 8 December 2022, at 01:47.
Content is available under Creative Commons Attribution/Share-Alike License; additional terms may apply. See Terms of Use for details.