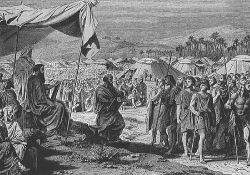 The numbering of the Israelites

A census is the process of obtaining information about every member of a population (not necessarily a human population). The term is mostly used in connection with national 'population and housing censuses' (to be taken every ten years according to United Nations recommendations); agriculture censuses (all agriculture units) and business censuses (all enterprises).

The census is a method used for accumulating statistical data, and plays a part in democracy (voting). Census data is also commonly used for research, business marketing, and planning purposes. It is widely recognized that censuses are vital for the planning of any society. However, for some the issue of right to privacy is involved. When a census asks detailed questions regarding sensitive matters, which have historically been used as the basis for discrimination, or the residents have questionable legal status, many will avoid answering. Thus, census information is never completely accurate. Nonetheless, it continues to be a vital tool for collecting demographic information and thus to assess the needs of the people, as well as the efficacy of social programs designed to safeguard and improve their welfare.

Did you know?
The Roman census was the most developed in the ancient world, the word "census" coming from Latin "censere," meaning "estimate"

Censuses vary in the information they collect, but many items are standard. Most censuses follow common demographic information such as the age, income, area of residence, level of education, marital status, and occupation among others.

The census can be contrasted with sampling in which information is only obtained from a subset of a population. As such it is a method used for accumulating statistical data, and also plays a part in democracy (voting). Census data is also commonly used for research, business marketing, planning purposes and not at least as a base for sampling surveys.

It is widely recognized that population and housing censuses are vital for the planning of any society. Traditional censuses are however becoming more and more costly. A rule of thumb for census costs in developing countries have for a long time been one USD / enumerated person. More realistic figures today are around three USD. These approximates should be taken with great care since a various amount of activities can be included in different countries (for example, enumerators can either be hired or requested from civil servants). The cost in developed countries is far higher. The cost for the 2000 census in the US is estimated to 4.5 billion USD. Alternative possibilities to retrieve data are investigated. Nordic countries Denmark, Finland and Norway have for several years used administrative registers. Partial censuses ‘Micro censuses’ or ‘Sample censuses' are practiced in France and Germany.

The first known census was taken by the Babylonians in 3800 B.C.E., nearly 6000 years ago. Records suggest that it was taken every six or seven years and counted the number of people and livestock, as well as quantities of butter, honey, milk, wool and vegetables.

One of the earliest documented censuses was taken in 500-499 B.C.E. by the Persian Empire's military for issuing land grants, and taxation purposes.[1]

Censuses were conducted in the Mauryan Empire as described in Chanakya's (c. 350-283 B.C.E.) Arthashastra, which prescribed the collection of population statistics as a measure of state policy for the purpose of taxation. It contains a detailed description of methods of conducting population, economic and agricultural censuses.

The Bible relates stories of several censuses. The Book of Numbers describes a divinely-mandated census that occurred when Moses led the Israelites from Egypt. A later census called by King David of Israel, referred to as the "numbering of the people," incited divine retribution (for being militarily motivated or perhaps displaying lack of faith in God). A Roman census is also mentioned in one of the best-known passages of the Bible in the Gospel of Luke, describing the birth of Jesus of Nazareth in Bethlehem because Mary and Joseph had gone there to be enumerated in a Roman census.

Rome conducted censuses to determine taxes. The word 'census' originates from ancient Rome, coming from the Latin word 'censere', meaning ‘estimate’. The Roman census was the most developed of any recorded in the ancient world and it played a crucial role in the administration of the Roman Empire. The Roman census was carried out every five years. It provided a register of citizens and their property from which their duties and privileges could be listed.

The world's oldest extant census data comes from China during the Han Dynasty. Taken in the fall of 2 C.E., it is considered by scholars to be quite accurate. At that time there were 59.6 million living in Han China, the world's largest population.[2] The second oldest preserved census is also from the Han, dating back to 140 C.E., when only a bit more than 48 million people were recorded. Mass migrations into what is today southern China are believed to be behind this massive demographic decline.

In the Middle Ages, the most famous census in Europe is the Domesday Book, undertaken in 1086 by William I of England so that he could properly tax the land he had recently conquered. In 1183, a census was taken of the crusader Kingdom of Jerusalem, to ascertain the number of men and amount of money that could possibly be raised against an invasion by Saladin, sultan of Egypt and Syria.

A very interesting way to record census information was made in the Inca Empire in the Andean region from the fifteenth century until the Spaniards conquered their land. The Incas did not have any written language but recorded information collected during censuses and other numeric information as well as non-numeric data on quipus, strings from llama or alpaca hair or cotton cords with numeric and other values encoded by knots in a base ten positional system.

Censuses are executed differently around the world. The regularity of the census can vary from every year to every ten years to being completely irregular. The information gathered also changes by country. Censuses are less common in developing countries due to their prohibitive expense.

Generally, census information is gathered by enumerators who visit every house, systematically recording the names, ages, and genders of everyone living there. Other information is also collected, including ethnic origins, language, occupation, and marital status of each person. Information is also collected regarding the dwelling, such as the number of bedrooms, cooking facilities, sanitation, water, heating, and so forth. Since such information can be regarded by the population as an invasion of privacy, census enumerators are generally required to take an oath of secrecy, and they can be punished with fines or even imprisonment if they disclose the facts they gather to any unauthorized person. Additionally, the information is used only to compile statistics, not to identify individuals.

Illegal immigrants and others living outside of conventional society may seek to avoid enumeration, causing underrepresentation of the population. When this is suspected, estimates of actual numbers can be obtained from other data, such as school attendance.

New methods of gathering census information have been developed, including the use of the internet, toll free telephone numbers, and pre-paid envelopes. Despite these new methods, some areas still take the census in the very traditional method of going door to door within a community and surveying the members of each family. This method is still in place in the United States for those who fail to return the mailed questionnaire.

While the census provides a useful way of obtaining statistical information about a population, such information can sometimes lead to abuses, political or otherwise, made possible by the linking of individuals' identities to anonymous census data.[3] Privacy advocates claim that governments have no need to collect information on citizens as it can be put to ill use or lost. Some believe the information taken by the census to be overly intrusive as it measures aspects of peoples' lives that are not often revealed to the public such as wealth, health, or living conditions. Illegal immigrants also try to avoid censuses as the information could potentially lead to their deportation or other such legal action.

It is not unusual for census data to be processed in some way so as to obscure individual information. Some censuses do this by intentionally introducing small statistical errors to prevent the identification of individuals in marginal populations; others swap variables for similar respondents.

Whatever measures have been taken to reduce the privacy risk in census data, new technology in the form of better electronic analysis of data pose increasing challenges to the protection of sensitive individual information.

In the United States, personally identifiable information about individuals is not released for 72 years after taking the census to protect the privacy of interviewees.[4]