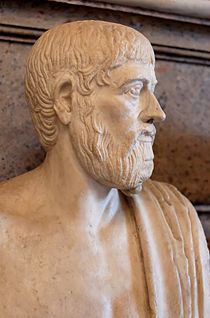 Bust of Pindar. Marble, Roman copy after a Greek original of the fifth century B.C.E. in the Palazzo Nuovo, Rome, Italy, first floor, Hall of the Philosophers.

Pindar (or Pindarus) (probably * 522 B.C.E. in Cynoscephalae; † 443 B.C.E. in Argos), was one of the canonical nine poets of ancient Greece who is considered, almost without dispute, to be the single greatest lyric poet of all Greek literature. Although critics of antiquity report that Pindar was a versatile poet who mastered a wide range of genres, only his odes have survived into the present-day. Although Pindar was influenced by earlier lyric poets, Stesichorus in particular, he is now considered by many to be the founder of the ode as a poetic form. His influence on the development of later ancient lyric poetry, well into the Latin era, is tremendous.

It is a testament to his triumphant skill as a poet that, although only a tiny fraction of his works have survived, what works remain are considered to be among the most valuable masterpieces of antiquity.

Pindar was born at Cynoscephalae, a village in Thebes. He was the son of Daiphantus and Cleodice. The traditions of his family have left their impression on his poetry, and are not without importance for a correct estimate of his relation to his contemporaries. The clan of the Aegidae – tracing their line from the hero Aegeus – belonged to the elder nobility of Thebes. It is no doubt due in part to this aristocratic background that Pindar — in contrast to a number of other Greek poets of his times — remained staunchly patriotic and traditional in the majority of his works.

Employing himself by writing choral works in praise of notable personages, events and princes, his house in Thebes was spared by Alexander the Great in recognition of the complimentary works composed for king Alexander I of Macedon.

Pindar composed choral songs of several types. According to one contemporary biographer, these works were grouped into 17 books by scholars at the Library of Alexandria. They were, by genre:[1]

Of this vast and varied corpus, only the victory odes survive in complete form. The rest are known to us only by quotations in other ancient authors or papyrus scraps unearthed in Egypt.

The victory odes were composed for aristocratic victors in the four most prominent athletic festivals in early Classical Greece: the Olympian, Pythian, Isthmian and Nemean Games. Rich and allusive in style, they are packed with dense parallels between the athletic victor, his illustrious ancestors, and the myths of gods and heroes underlying the athletic festival. But "Pindar's power does not lie in the pedigrees of … athletes, …or the misbehavior of minor deities. It lies in a splendor of phrase and imagery that suggests the gold and purple of a sunset sky." [2] Two of Pindar's most famous victory odes are Olympian 1 and Pythian 1. The opening stanza of Olympian 1 may give the reader a glimpse of Pindar's effortlessly metaphorical and allusive style:

Best of all things is water; but gold, like a gleaming fire

by night outshines all pride of wealth beside.
But, my heart, would you chant the glory of games,

look no farther than the sun

Pindar is said to have begun his training as a poet through music: he received lessons in lyre-playing from one Scopelinus at Thebes, and afterwards to have studied at Athens under the musicians Apollodorus and Lasus of Hermione. Several passages in Pindar's extant odes glance at the long technical development of Greek lyric poetry before his time, and at the various elements of musical, performative, and literary art which the lyricist was required to temper into a harmonious whole. The fact that stands out is that Pindar was precocious, laborious, and widely trained in all the arts of classic Greece.

Pindar's wife's name was Megacleia, and he had a son named Daiphantus and two daughters, Eumetis and Protomache. He is said to have died at Argos, at the age of 79 in 443 B.C.E..

Chronology of the Odes

Modern editors have assigned dates, securely or tentatively, to Pindar's victory odes, based on ancient sources and other grounds. (Doubt is indicated by a question mark immediately following the number of an ode in the list below.) The result is a fairly clear chronological outline of Pindar's career as a poet: