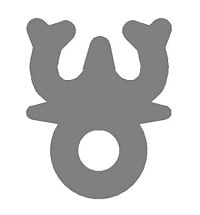 Symbol of the triratna, as seen in the Sanchi stupa, first century B.C.E.

The Three Jewels (also called the Three Treasures or Triple Gem) are three religious vows that are made in the process of becoming a Buddhist. The Buddhist cermonies of ordination, called "Taking refuge," involve three pledges, which are as follows:

Taking refuge in these "Triple Jewels" is generally considered to make one officially a Buddhist. These three vows are central to both Buddhist lay and monastic ordination ceremonies, as initiated by Gautama Buddha himself.

The following Pali chant, known as the Vandana Ti-sarana, is often recited by both monks and lay people in many Theravada Buddhist communities:

The Mahayana Chinese/Japanese version differs only slightly from the Theravada:

The prayer for taking refuge in Tibetan Buddhism. 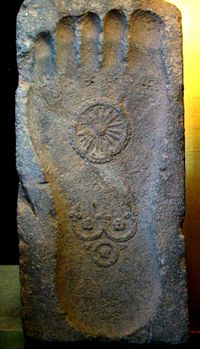 The Triratna or "Three Jewels" symbol, on a Buddha footprint (bottom symbol, the top symbol being a dharmachakra). First century C.E., Gandhara.

Discussions of The Three Jewels

The qualities of the Buddha, Dharma, and Sangha are frequently repeated in the ancient texts and are called "Mirror of the Dhamma" or "Dhamma Adassa."

Sometimes the Buddha as refuge is taken to refer to the historical Buddha and also 'the full development of mind', in other words, the full development of one's highest potential, i.e. recognition of mind and the completion or full development of one's inherent qualities and activities. In this context, the Triple Gem is in the center of one of the major practices of mental "reflection" in Buddhism; the reflection on the true qualities of the Buddha, Dharma and Sangha. These qualities are called the Mirror of the Dharma in the Mahaparinibbana Sutta and help the practitioner attain the true "mind like a mirror."

The Three Jewels and The Three Roots

In Vajrayana traditions, a second formulation of refuge called the "Three Roots" is added to the three jewels. They are

These are seen as forms of the Body (Sangha), Speech (Dharma) and Mind (Buddha) of the Buddha. Of these, the guru has the most prominent place in the Vajrayana, as without his personal assistance and guidance, a practitioner cannot achieve proper spiritual progress.

Dilgo Khyentse Rinpoche discusses the "Twilight Language" equivalences and polyvalence of the Outer, Inner and Secret aspects of the Three Jewels:

History of the Triple Gem Metaphor

The three gems are so called because of their treasured value to Buddhists as well as their indestructible and unchanging nature.

"I go to Master Gotama for refuge and to the Dhamma, and to the Sangha of Bhikkhus."[3]

Buddha's mind in his earth body or sambhogakaya is frequently associated with the greatest gem of all, the diamond, the hardest natural substance. In the Anguttara Nikaya (3:25), Buddha talks about the diamond mind, which can cut through all delusion.

The expression Three Gems are found in the earliest Buddhist literature of the Pali Canon, besides other works there is one sutta in the Sutta-nipata, called the Ratana-sutta[4] which contains a series of verses on the Jewels in the Buddha, Dharma, and Sangha.

In the Ratana-sutta, all the qualities of the Sangha mentioned are attributes of the Buddha's enlightened disciples:

Used as a metaphor with Jainism and Taoism

In Buddhism, the "Triple Gem" is not a metaphor and actually the initiation into the Dhamma that every Buddhist must take. However, it is used metaphorically in Jainism and Taoism. When Buddhism was introduced into China, ratnatraya was translated as sanbao (Chinese: 三寶; pinyin: sānbǎo; Wade-Giles: san-pao; literally "three jewels/treasures"), a word that first occurs in the Dao De Jing.

In his analysis of the Tao Te Ching, Victor H. Mair notes[5] that the jewel metaphor was already widely used in Indian religious metaphor before the Tao Te Ching was written. In Jainism too,

For the Jains, the Three Jewels are a metaphor for describing conduct and knowledge: 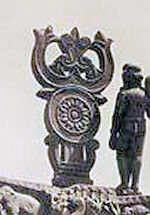 The compound Buddhist symbols: Shrivatsa within a triratana, over a Dharmacakra wheel, on the Torana gate at Sanchi. First century B.C.E.

The Three Jewels are also symbolized by the triratna, composed of (from bottom to top):

On representations of the footprint of the Buddha, the Triratna is usually also surmounted by the Dharma wheel.

Second century B.C.E. coin of the Kunindas, incorporating on the reverse the Buddhist triratna symbol on top of a stupa.

The Triratna is also on the first century B.C.E. coins of the Kingdom of Kuninda in northern Punjab, surmounting depictions of stupas, on some the coins of the Indo-Parthian king Abdagases, or the coins of some of the Kushan kings such as Vima Kadphises.

The triratna can be further reinforced by being surmounted with three dharma wheels (one for each of the three jewels of Buddhism: the Buddha, the Dharma and the Sangha).

The triratna symbol is also called nandipada, or "bull's hoof," by Hindus.