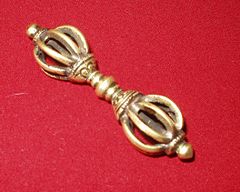 Vajra (Sanskrit: meaning thunderbolt and diamond) refers to an important sacred tool and ritual implement in Vajrayana Buddhism, Hinduism and Tantra where it symbolizes the male principle of creation and represents both method and "Upaya" (skillfull means) in religious practice. When made to be worn as a pendant, it reminds the wearer, and the viewer, of the supreme indestructibility of knowledge. In the tantric traditions of Buddhism, the vajra also symbolizes for the nature of reality, or sunyata.

Vajrayana (meaning "Thunderbolt Way") is one of the three major branches of Buddhism that derives its name from the Vajra.

The Tibetan word for vajra is dorje, which is also a common male name in Tibet and Bhutan. Dorje can also refer to a small sceptre held in the right hand by Tibetan lamas during religious ceremonies.

Both the religions of Hinduism and Buddhism utilize the vajra in their religious mythology, symbolism, and philosophy. The vajra is a particularly important ritual implement in Tibetan Buddhism, which is also called Vajrayna (meaning "Thunderbolt Raft" or "Diamond Vehicle").

Vajrayana Buddhism derives from several sources including the practice of tantric Hinduism, which flourished in India between the eighth to tenth centuries. During this time, Mahayana and tantric ideas were imported into Tibet and assimilated with local religious practices to develop a distinct form of Buddhism that became known as Vajrayana. This branch of Buddhism elevated the Vajra the supreme symbol of Enlightenment.

The term is employed extensively in tantric literature: the term for the spiritual teacher is the vajracarya; instead of bodhisattva, we have vajrasattva, and so on. The practice of prefixing terms, names, places, and so on by vajra represents the conscious attempt to recognize the transcendental aspect of all phenomena; it became part of the process of "sacramentalizing" the activities of the spiritual practitioner and encouraged him to engage all his psychophysical energies in the spiritual life.

In Hindu mythology, Vajra is the weapon of Indra, the Vedic god of war and king of the devas. In Hindu mythology, the vajra is a powerful weapon having the combined features of sword, mace, and spear. It was created out of hard thigh bones of sage Dadhichi who gave up his life willingly for a noble cause so that his spine could be used to build the weapon. This was the weapon that Lord Indra used to kill Vritrasura who had conquered heaven and terrorized the gods. Due to this supreme sacrifice, sage Dadhichi became a legend. Vritra, the serpent of drought had swallowed the cosmic waters. Indra split the serpent's stomach using the vajra, releasing the waters. The Vajra is believed to be made of sage Dadhichi's bones.

The vajra is also extensively used in the rituals of the tantra where it symbolizes the male principle that represents method, while the Bell symbolizes the female principle representing compassion. Their interaction leads to enlightenment. In addition, the Vajra represents "Upaya" (skillfull means). When made to be worn as a pendant, it reminds the wearer, and the viewer, of the supreme indestructibility of knowledge. In the tantric traditions of both Buddhism and Hinduism, the vajra is a symbol for the nature of reality, or sunyata, indicating endless creativity, potency, and skillful activity. 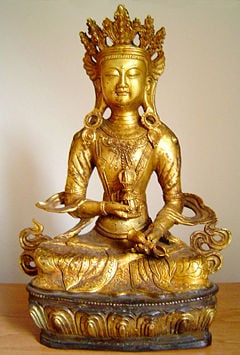 Vajrasattva holds the vajra in his right hand and a bell in his left hand.

It consists of a spherical central section, with two symmetrical sets of five prongs, which arc out from lotus blooms on either side of the sphere and come to a point at two points equidistant from the centre, thus giving it the appearance of a "diamond sceptre," which is how the term is sometimes translated. The vajra is made up of several parts:

In the center is a sphere that represents Sunyata, the primordial nature of the universe, the underlying unity of all things. Emerging from the sphere are two eight petalled lotus flowers. One represents the phenomenal world (or in Buddhist terms Samsara), the other represents the noumenal world (or Nirvana). This is one of the fundamental dichotomies perceived by the unenlightened.

Arranged equally around the mouth of the lotus are two, four, or eight mythical creatures, which are called makaras. These are mythological half-fish, half-crocodile creatures made up of two or more animals, often representing the union of opposites (or a harmonization of qualities that transcend our usual experience). From the mouths of the makaras come tongues that come together in a point.

The following are the five poisons and the analogous five wisdoms with their associated Buddha figures:

Retrieved from https://www.newworldencyclopedia.org/p/index.php?title=Vajra&oldid=1035882
Categories:
Hidden category:
This page was last edited on 21 April 2020, at 20:45.
Content is available under Creative Commons Attribution/Share-Alike License; additional terms may apply. See Terms of Use for details.