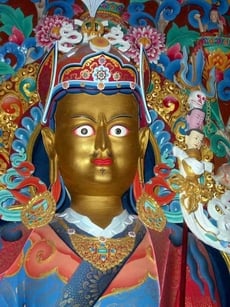 Padmasambhava (eighth century C.E.) (Sanskrit for "Lotus-born") was a Tantric Buddhist Master who helped to transmit Tantric Buddhism to Tibet during the eighth century, and, according to popular belief, established the first monastery in the region. Also known as Guru Rinpoche ("Precious Master"), followers of the Nyingma school regard him as the founder of their lineage, and some Buddhists view Padmasambhava as an incarnation of Amitābha Buddha. There are many legends associated with the life of Padmasambhava, and stories about his alleged mystical powers abound, reflecting a more escoteric side of Buddhism. The flavor of Tibetan Buddhism owes much to the life of Padmasambhava, and he is lauded as one of the most important figures in Tibetan religious history.

Many details about the life of Padmasambhava are debated including his origins. The main source of his biographical information is found in a mystically "recovered" text called the Padma bka'i thang (allegedly recovered in 1346), attributed to his Tibetan consort, Yeshe Tsogyal. (However, this text may not be the most reliable or trustworthy work for factual dates.)

Though traditionally thought to have been a native of northwestern India (modern day Pakistan), speculation that Padmasambhava came from what is now the Middle East (a region called Urgyan) has grown (Guenther 1996). There is also some debate concerning whether there may have been two figures calling themselves Padmasambhava—an original and a copycat—employing the name of the famous teacher.

Stories surrounding the life of Padmasambhava parallel the life of Gautama Buddha. According to legend, Padmasambhava was born in a miraculous way as an eight year old child appearing in a lotus flower floating on top of Lake Dhanakosha, near the present day India-Pakistan border. It is said that his special nature was recognized by the local king, Indrabodhi, who married Padmasambhava to one of his daughters (Mandarava) who developed into realized practitioner of tantric Buddhism. Many Tibetan thangkas and paintings show Padmasambhava engaged in tantric practices with Mandarava and his other consort, Yeshe Tsogyal of Tibet.

Like Siddhartha Gautama, Padmasambhava was raised as a prince in the court of his father (though in this case, adopted father). Also like Siddhartha, Padmasambhva's father forbade him from seeking a religious life. It is said that Padmasambhava accidentally stabbed the son of one of the king's ministers, releasing the man from the bonds of reincarnation though his skill in yogic powers. However, for this action he was banished from the court and freely chose to live in a cemetery district. Again mirroring the biography of Gautama, Padmasambhava would leave his wife in order to spread the dharma.

In exile, it is said that Padmasambhava perfected his knowledge of Buddhist teachings, and developed the power to transcend the cycle of birth and death, transiting various heavens and hells, and eventually freeing himself of the cycle samsara. He would eventually return to his father's court a great spiritual teacher.

Padmasambhava's ability to memorize and comprehend esoteric texts in a single hearing established his reputation as a master above all others. His fame became known to Trisong Detson, the king of Tibet (circa 740-798 C.E.), whose kingdom was beset by evil mountain deities, common to the indigenous Tibetan religion Bön. It is said that these powerful beings had already driven away one Buddhist teacher from the West named Śāntaraksita. The king invited Padmasambhava to Tibet where it is claimed that he used his tantric and meditative powers to subdue the evil deities he encountered along the way.

It is said that Padmasambhava knew of his impending calling to Tibet before word was sent to him from that region. According to tradition, Padmasambhava was eventually able to convert the mountain deities to Buddhism, and these supernatural beings swore loyalty to the dharma becoming positive forces in Tibetan Buddhism thereafter. Padmasambhava's battle with evil spirits echoes the original Buddha's battle against Mara, and closely mirrors the work of Shenrap, the founder of the Bön religion. The traditions involving his subjugation of Bön deities suggest that initial response to Padmasambhava's arrival in Tibet was not universally welcomed, and that his new teachings were considered a challenge by the practitioners of Bön.

Eventually Padmasambhava received the Tibetan Emperor's wife, identified with the dakini Yeshey Tsogyel, as a consort. This was in accordance with the tantric principle of not eliminating negative forces but instead redirecting them to fuel the journey toward spiritual awakening.

While in Tibet, it is claimed that he founded the first monastery in the country, Samye Gompa, initiated the first monks, and introduced the people to the practice of Tantric Buddhism. However, documents relating the life of Padmasambhava are not in consensus concerning the length of time he spent in Tibet. Accounts range between six months and fifty years. Eventually he decided to leave, and it is recorded that he spent time in many other regions of Asia. In Bhutan he is associated with the famous Taktshang or "Tiger's Nest" monastery built on a sheer cliff wall about 500 meters above the floor of Paro Valley. It is also said that he flew there from Tibet on the back of his favorite consort, Yeshe Tsogyal, who he transformed into a flying tigress for the purpose of the trip. Later he traveled to Bumthang district (in modern day Bhutan) to subdue a powerful deity offended by a local king. According to local legend, Padmasambhava's body imprint can be found in the wall of a cave at nearby Kurje Lhakhang temple, Bhutan.

There are a variety of texts attributed to Padmasambhava, some of which were held secretly by the Tibetan rulers immediately after being written with the intention of making them public later, and some that were disseminated after their production. Padmasambhava’s works were almost completely written in Tibetan, with the help of translators. In the writings attributed to Padmasambhava, such as the sPros-bral dongsal, it is clear that though he was well versed in Buddhist practice and philosophy he was something of a revolutionary. He was not interested in perpetuating Buddhism exactly as it had been taught to him. Herbert Guenther describes Padmasambhava's writings in this way:

In these works he emerges as a visionary thinker who has little patience with the stolid and dull disquisitions of reductionist thinkers and the fastidious but tedious ritualists. He knows their tenets and practices and dismisses them as instances of imperfect movements and imperfect fixations. As a visionary thinker of the highest order he is one who knows and speaks from experience and, for this reason alone, he is a striking example of individuality. (Guenther 1996, 205)

It is also said that Padmasambhava hid a number of "treasure texts" (called termas) in lakes, caves, fields and forests of the Himalayan region to be found and interpreted by future spiritual treasure finders (called tertons). These works were deemed too esoteric or advanced for the Tibetans of Padmasambhava's time and were thus occulted to ensure they were available as the religious climate developed. Termas can be tangible written documents physically hidden or revelations that are later received by later incarnations of Padmasambhava. For example, the important work called the Tibetan Book of the Dead (Bardo Thodol) was a terma text recovered in the later history of Tibetan Buddhism.

Padmasambhava was not content to pass on Buddhist teachings as he knew them: that is, in their institutionalized form. He was critical of his contemporaries and saw the Buddhist movements of his time as imperfect. Padmasambhava focused on his own experiences, and in his works he cites his own deepest insights into the nature of reality. His teachings were somewhat unique as he blended the idea of reincarnation with an understanding of the cosmos divided into three realms—a realm of the divine, a realm of the humans, and a realm of the demonic. His understanding of the demonic realm of the cosmos corresponded to the base level of the human psyche, progressing to more developed heights in the human and divine realm. Though the idea of a tripartite cosmos was not new in Buddhism (and thus Padmasambhava's teachings did not contradict popular Buddhist thought), his unique application of the cosmos in Buddhist psychology was a novel approach to understanding and explaining the mind.

Padmasambhava is also recognized as an important tantric teacher, significant because tantra is so vital to Tibetan Buddhism. Through written works and oral transmission, Padmasambhava is said to have offered the fundamental instructions to Mahayoga and Atiyoga as found in the Nyingma school of Tibetan Buddhism. Atiyoga, also known as Dzog Chen, is the highest level of Nyingma tantra. Mahayoga is also a high "inner tantra," based on the visualization of mandalas and deities. Padmasambhava's teachings were practice-oriented and emphasized the role of tantra in uncovering truth.

Though Padmasambhava did not originally introduce Buddhism to Tibet, his role in the transmission of Tantric teachings to Tibet was of legendary importance in shaping the genesis of Buddhism in the region. Not only is Padmasambhava recognized as establishing the oldest monastery and school of Tibetan Buddhism—the Nyingma school—he is also acclaimed for subduing the malicious mountain deities of the Bon religion and allegedly converting them to Buddhism. His emphasis on esoteric tantric wisdom has influenced the flavor of Tibetan Buddhism to this day, and for the above reasons, Padmasambhava is lauded as one of the most important figures in Tibetan religious history.