In Buddhism, Mara is the demon who assaulted Gautama Buddha beneath the bodhi tree, using violence, sensory pleasure and mockery in an attempt to prevent the Buddha from attaining enlightenment. In Buddhist cosmology, Mara personifies unskillfulness, the "death" of the spiritual life. He is a tempter, distracting humans from practicing the Buddhist dharma through making the mundane seem alluring, or the negative seem positive. Buddhism utilizes the concept of Mara to represent and personify negative qualities found in the human ego and psyche. The stories associated with Mara remind Buddhists that such demonic forces can be tamed by controlling one's mind, cravings and attachments.

Many religions speak of demonic forces within the cosmos representing the antithesis of truth and goodness—these forces are ultimately vanquished in the triumph of good over evil, or truth over untruth.

In Buddhist iconography, Mara is most often presented as a hideous demon, although sometimes he is depicted as an enormous elephant, cobra or bull. When shown in an anthropomorphic (human) form he is usually represented riding an elephant with additional tusks. Other popular scenes of Mara show his demon army attacking the Buddha, his daughters tempting the Buddha, or the flood that washes away those under Mara's command.

In traditional Buddhism four senses of the word "mara" are given. Firstly, there is klesa-mara, or Mara as the embodiment of all unskillful emotions. Secondly, mrtyu-mara, or Mara as death, in the sense of the ceaseless round of birth and death. Thirdly, skandha-mara, or Mara as metaphor for the entirety of conditioned existence. Lastly, devaputra-mara, or Mara the son of a god, that is, Mara as an objectively existent being rather than as a metaphor. This last connotation of mara is strikingly similar to the Hindu concept of Maya (Illusive Power of God), which may suggest that the two words Maya and Mara are perhaps directly related.

Mara is also known as Namuci ("not-loosing"), a demon described in the Hindu Vedic literature as causing drought. Describing Mara thus is a literary allusion used by Buddhists to indicate his power and malevolence. Mara is also called Kanha ("the dark one"), associating his power with darkness, also a metaphor for confusion. Other epithets of Mara are Maccu ("death"), Antaka ("the end), and Papima ("evil one"), all of which further attest to his notoriety in Buddhist thought and literature.

Though Mara makes appearances in a variety of works, he is the focus of a group of sutras in the Pali canon, all found within the Samyutta Nikaya ("Grouped Discourses") of the Sutta Pitaka. These texts are difficult to date accurately—traditionally they are dated within the century following Buddha's death. Two sections are specifically focused on Mara: the Mara-Samyutta and the Bhikkhuni-Samyutta; the first describing Mara's attacks on the Buddha and his close disciples, and the latter made up of stories of Mara's attempts to interfere the practice of Buddhist nuns. The Mara-Samyutta is arranged in three parts, the first two parts containing ten chapters and the third containing one. The Bhikkhuni-Samyutta is made up of ten chapters.

The stories presented are formulaic—Mara appears, tries, and fails to meddle with the affairs of Buddha or one of his disciples, and is rebuked. Most of the stories found in the Mara-Samyutta describe Mara's attacks on the Buddha while he is alone during meditation, though some also describe Mara's attempts to distract the Buddha's teaching. In every story Mara is foiled—the pattern continues in the Bhikkhuni-Samyutta, where clever Buddhist nuns are able to overcome Mara consistently. The final chapter of the Mara-Samyutta has Mara admit to his daughters he cannot overcome the Buddha and concede defeat, though later writings indicate he has not lost interest in harassing Buddha's converts. The eighth chapter of the second part of the Mara-Samyutta suggests that Mara is not an eternal being, but rather a position held by a succession of beings possessing severely evil karma. Some early Buddhists, however, rather than seeing Mara as a demonic, virtually all-powerful Lord of Evil, regarded him as more of a nuisance. Many episodes concerning his interactions with the Buddha and his disciples have a decidedly humorous air to them.

Mara is best known for his role in opposing Buddha prior to and during his enlightenment. Many Buddhist works recount this tale, and it is told in great detail in the Buddhacarita, written about 100 C.E. by the Buddhist writer Ashvagosha. As Buddha sits beneath the bodhi tree Mara is alerted to this impending enlightenment. As lord of death and sensual pleasure, Mara recognizes Buddha's success will mean an end to his reign. Though futile, he decides to make attempts at disturbing Buddha and preventing his enlightenment. 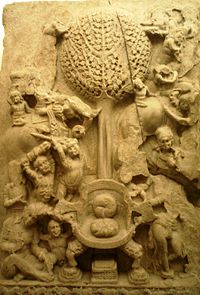 Mara's assault on the Buddha (aniconic representation: the Buddha is only symbolized by his throne), second century C.E., Amaravati (India).

Mara attempts to tempt Buddha, both with promises of glory and pleasure, and then begins to warn of consequences for breaking away from the prince's religious and secular duties. Buddha easily rejects these, knowing they are meaningless. Mara uses force against Buddha, appearing as a hideous demon and sending an army of likewise revolting and terrible creatures, bent on the bodily destruction of Buddha. They launch a volley of arrows at Buddha, but as these projectiles approach they are transformed into flowers and fall harmlessly to the ground. Buddha invokes the earth goddess to wash away the demons in a flood—the earth goddess obliges. The daughters of Mara try to coerce and seduce Buddha, but he recognizes them as they are, and is not swayed from his goal. Finally Mara mocks Buddha, and tells him his work is for nothing, as there is no one there to recognize his achievement. Buddha responds that the earth will be his witness, and after touching the ground the earth trembles in agreement. Thus Mara admits defeat for the moment; however, he is determined to carry on harassing the Buddha and his followers.

Legend continues to portray Mara as an enemy of the dharma. During various attempts by Buddha to teach key Buddhist ideas to groups of listeners Mara intervenes to halt the enlightenment of further seekers. For instance, when Buddha preached in a busy market place, Mara manifested himself as a bull and began to destroy the wares of merchants, causing those amassed to hear the dharma to turn their attention to restraining the beast. Mara also beguiled Ananda, Buddha's disciple, tricking the student into accepting his teacher's decision to leave the world though having the power to stay. In the Asokavandana (third century B.C.E.), the monk Upagupta is said to have had his potential converts led astray by the spontaneous appearance of money and valuables and celestial music. This same source indicates that Upagupta was eventually able to convert Mara to Buddhism; however, this hagiography is considered apocryphal by many Buddhists.

It is notable that though the recognition and depiction of Mara persisted in the spread of Buddhism to China, Tibet, Japan, and other regions, little was added to the mythos surrounding him or his role in Buddhism. Far Eastern understandings and representations of Mara are fundamentally congruent with their Eastern predecessors.

The Development of Mara

In his work Buddhism and the Mythology of Evil, T. O. Ling suggests that Mara is the Buddhist extension of an existing framework for demonology in Hinduism. He makes the case that Mara qualifies as a yakkha, a Pali word for nature spirit (Sanskrit yaksha). Ling notes that both yakkhas and Mara attack their victims in the night, seek to bring distraction to spiritual people, can shape-shift into all manners of terrifying creatures, seek to preserve the existing ritual framework (at least those in which they are beneficiaries), and can spiritually possess mortals (Ling, 45). These similarities indicate that Mara is not entirely a Buddhist invention, but evolved from popular yakkha mythology.

Though these similarities do exist, scholars (Ling included) note that Mara does possess a great deal of attributes that do define him as distinctly Buddhist. Buddhists themselves differentiate between Mara and yakkhas: whereas Mara is set up in diametric opposition to the Buddha, the yakkhas only serve as small role in Hindu mythology—that is, Mara is not unlike Satan as found in Christianity. Hinduism has no such figure, and yakkhas are certainly not identified this way. As well, Mara's motivation is dressed in Buddhist thought;to distract those who are intent on learning the Buddhist dharma.

Mara has also been associated with the Hindu deity Kama, a god linked with sensuous desire and love. This identification does not appear in the earliest Buddhist writings, but appears to be a later development. The implication is clear: Kama's domain is essentially the same as Mara's, seen through the lens of Buddhist thought. According to the second Noble Truth of Buddhism desire is a cause of suffering; in other words, the realm of Kama leads to the realm of Mara (ie., death). This understanding of the Kama/Mara relationship is not found in Hinduism. In Buddhist cosmology Mara is sometimes referred to as the ruler Kamadhatu, the "sense and desire realm."

Early Buddhists, as well as later Buddhists, acknowledged both a literal and "psychological" interpretation of Mara. Mara can be interpreted either as a real external demon or as internal vices that one faces on the pathway to enlightenment. From the psychological perspective, Mara is a manifestation of one's own mind. No external demon exists since it emerges from our own deluded thoughts. Those who see Mara as a personification of our human ego interpret the stories associated with him in a symbolic way. Mara becomes a representation for internal vices. His attack on the Buddha represents internal impulses towards violence and rage that can be overcome by following the Buddha's teachings of cultivating compassion, detachment and gentleness. The daughters of Mara represent lust and desire, which the Buddha overcame by recognizing their true nature as emptiness. Mara's own attack on the Buddha's pride was defeated by the Buddha's denial of the self since there was no "I" (ego) left to feel pride. Thus, the story of Mara's temptation can be interpreted symbolically, whereby the Buddha's own emotions, desires, and sense of self were represented by demons. Regardless of how Mara is understood, it is agreed that Mara has power only to the extent that our minds give it to him, and he must be overcome to proceed further into the Buddhist understanding of reality.

Buddhist legends about Mara likely served several purposes. They may have been stories formulated to satisfy the laity of a newly formed religious group that lacked much of its own mythology. They may also have represented a veiled critique of Hindu understandings of spirituality. However, it seems likely that the purpose of stories about Mara was largely didactic in nature. They were (and still are) meant to inform practitioners of the dangers they face when they tread the Buddhist path. In this sense Mara is used as a tool to teach Buddhists about physical and/or psychological obstacles they will confront in their meditation practice.

Retrieved from https://www.newworldencyclopedia.org/p/index.php?title=Mara&oldid=686833
Categories:
Hidden category:
This page was last edited on 3 April 2008, at 22:43.
Content is available under Creative Commons Attribution/Share-Alike License; additional terms may apply. See Terms of Use for details.