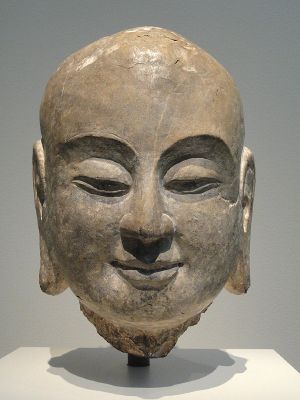 Ananda (Chinese: 阿難, A Nan or 阿難陀, A Nan Tuo) was one of the ten great disciples and a devout attendant of the Buddha. He was renowned as the Guardian of the Dharma.

The word Ananda means "bliss" in Pali, Sanskrit, Sinhala, and Tamil and is quite often part of Buddhist and Hindu monastic names.

Ananda's highly developed memory, plus the fact that he was constantly at the Buddha's side, meant that he, more than any other person, was responsible for preserving and transmitting the Buddha's teachings for future generations.

He was the ideal disciple, known as a model of blameless conduct, untiring solicitude to his Master and to his fellow monks, his unshakable friendliness, his patience, and his readiness to help.[1]

Ananda was born in Kapilavatthu and was the Buddha's cousin, being the son of Amitodana, the brother of the Buddha's father, Suddhodana. It was during the Buddha's first trip back to Kapilavatthu after his enlightenment that Ananda, along with his brothers Anuruddha and Devadatta, all became monks.

Ananda was reportedly around 37 years old at the time he became a student of Belatthasisa, an arahant (a fully liberated saint) in the Sangha. The monk's life suited Ananda and his quiet, unassuming nature meant that he was little noticed by the others—until he was selected to be the Buddha's personal attendant.

During the first years of his life as a monk, Ananda was completely unknown, as he devoted himself to the purification of his mind. In his early years Ananda was so trusted by Buddha that on many occasions he was asked to speak on his behalf and then later would state that he himself would not have presented the teachings in any other way. Ananda's knowledge of Dharma caused him frequently to be sought out by other monks to explain something the Buddha had said.

Because he attended the Buddha personally and often traveled with him, Ananda overheard and memorized many of the discourses the Buddha delivered to various audiences. Therefore, he is often called the disciple of the Buddha who "heard much."

Ananda would gain great fame as the personal attendant of the Buddha. When he was fifty-five years old, the Buddha expressed a need for a new attendant and asked for volunteers. Many volunteered, but Ananda was chosen despite the fact that he did not.

Ananda devoted himself to Buddha with a special childlike fervor and served as his personal attendant for twenty-five years. Descriptions of him indicated he had no intellectual attainments, but that he was a man of great sincerity and had a loving nature.[2]

His duties included taking care of all the Buddha's personal needs in sickness and health, accompanying him on his rounds through the monastery, and facilitating communication between him and the thousands of monks.[3]

As Buddha's personal attendant, he had daily contact with a large number of people with diverse concerns, yet it is reported he had no enemies or rivals, and his relationships with others were without conflict or tension. His great powers of memory that he used for study also enabled him to remember people and circumstances.[4]

In the long list of the disciples given in the Anguttara (i. xiv.), where each of them is declared to be the chief in some quality, Ananda is the only one mentioned five times, while the most any other was named was twice. He was honored for his knowledge of the discourses, his good memory, his mastery of the sequential structure of the teachings, his steadfast study, and his devotion as a personal attendant. These made him a master of mindfulness.

As a result of these qualities, Buddha hailed Ananda as the "Guardian of the Dhamma." All these qualities enabled him to retain the words of his master exactly as they were spoken and by his sense of order he could be relied on to preserve them in the correct sequence and then explain them in such a way that other monks would be properly trained.

According to Buddhist history, Buddha originally established three branches to his sangha. Nuns were only recognized after he was persuaded by his foster mother, Mahaprajapati Guatami, and Ananda. When approached by his foster mother and some other women, he discouraged them from following him. This however did not deter the women, who found it a worthy cause to follow the Buddha despite his unwillingness to ordain them. They continued to follow the Buddha and to listen to his teachings until Ananda agreed to plead with the Buddha on their behalf.

Ananda approached the Buddha twice on their behalf and both times the request was rejected. They then requested that Ananda return to the Buddha a third time. This time the Buddha agreed after reflecting and determining that rejecting the women again would cause mental anguish for Ananda. This would confuse the disciple about his teachings so it was better not resist it. The Buddha is said to have concluded the allowing women to be ordained would shorten the influence of his teachings by one half, but that this was better than allowing the teachings to become muddled. The women however were required to accept eight additional rules beyond those taken by monks. Most of these rules pertain to their interaction with monks.[5]

The Mahaparinibbana Sutta is one of the most important with regards to the relationship that Ananda had with Buddha. It chronicles the last days of Buddha before he entered Nirvana.

One of Ananda's concerns was what would become of the Sangha after he died. Who would lead them? The Buddha said: "Ananda, it may be that you will think: 'The Teacher's instruction has ceased, now we have no teacher!' It should not be seen like this, Ananda, for what I have taught and explained to you as Dhamma and discipline will, at my passing, be your teacher."[6]

On of the Buddha's final acts was to assemble the monks and speak to them about the insight and kindness of Ananda. He told Ananda:

Three months after the Buddha's final Nirvana, five hundred enlightened monks convened a Council at Rajagaha for the purpose of collecting all the Buddha's teachings and committing them to memory so they could be handed down to future generations.

Prior to this First Buddhist Council (544 B.C.E.), it was proposed that Ananda not be permitted to attend on the grounds that he was not yet an arahant. According to legend, this prompted Ananda to focus his efforts on the attainment of Nirvana and he was able to reach the specified level of attainment before the calling of the conclave.

At the Council, the first to recite was Ananda, who recited not only everything he had heard, but the place in which each discourse was given. Other monks were then asked to confirm Ananda's recollection.

It was also at this council that the Buddha's teachings were divided into three categories, or "baskets" (pitaka): Discourses, discipline, and higher knowledge. The Tripitaka that was formed at this meeting is the same canon used by Buddhists today.[8]

The Dharma was passed on through the centuries from teacher to pupil orally. The Dharma was recited daily by groups of people who regularly cross-checked with each other to ensure that no omissions or additions were made.[9]

Ananda's spiritual lineages played an important role in the transmitting of the original teachings of Buddha in the first century after his passing.

Ananda himself spoke at the First Council after Buddha passed away and thus became the main repository of Dharma orthodoxy. At the Second Council (444 B.C.E.) six of the eight monks chosen to attend were his disciples. Because he lived longer than most of the other direct disciples, Ananda's disciples were among the eldest and most revered almost 100 years after the Buddha's Mahaparinirvana.[10]

A total of six Great Councils have now been held for the sake of taking take up issues relating to preserving the meaning and purity of the teachings of the Buddha. The Buddhist Councils have been instrumental in the creation and preservation of the Pali Canon (Tipitaka), both in its original oral form, and, as it now exists, in its written form.[11]

It is not known when or where Ananda passed away but, according to tradition, he lived to a ripe old age. When Fa Hien, the famous Chinese pilgrim, visited India in the fifth century C.E., he reported seeing a stupa containing Ananda's ashes, and that nuns in particular had high regard for his memory.[12]

Retrieved from https://www.newworldencyclopedia.org/p/index.php?title=Ananda&oldid=1094632
Categories:
Hidden category:
This page was last edited on 9 January 2023, at 12:44.
Content is available under Creative Commons Attribution/Share-Alike License; additional terms may apply. See Terms of Use for details.