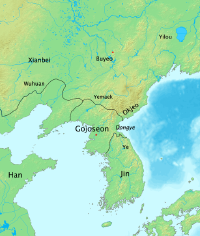 The Three Gojoseon kingdoms first appear in Joseon Sangosa and has been researched by South Korean, North Korean, and Chinese scholars.[1][2][3][4] Some leading Korea scholars omit mention of the Three Gojoseon kingdoms altogether.[5] [6] The myth of Dangun with legend following presents Gojoseon (고조선, 2333 B.C.E. – 239 B.C.E.) as the first state of Korea established in Liaoning, south Manchuria and northern Korean Peninsula. According to a historical theory rejected by many respected Korean historians, Gojoseon became a united kingdom composed of the three confederacies Majoseon (마조선), Jinjoseon (진조선) and Beojoseon(번조선), also known as Mahan, Jinhan, and Beonhan.

In conventional Korean history, the posterior Samhan (the three confederacies Mahan, Byeonhan, and Jinhan) existed in central and southern Korean Peninsula, all established around the time of Gojoseon's fall. They continued until fully absorbed into the Three Kingdoms of Korea around the fourth century C.E.. The posterior Samhan has been differentiated from the prior Samhan or Samjoseon.

The controversy over the creation of Gojoseon out of the Confederation of the States of Mahan, Jinhan, and Beonhan is basically a question of getting the history right. To accomplish that, archaeological sites in North Korea and China will need discovery and investigation by reputed archaeologists without political agendas or without governments controlling the digs and the interpretation of the digs. That is not the situation currently.

Based on Joseon Sangosa that is written by Sin Chaeho, Gojoseon had an organizational system of three states and five ministries. Three states were composed of Jinjoseon, Majoseon and Beojoseon. Jinjoseon was ruled by a Supreme-Dangun. Beojoseon and Majoseon were ruled by two Vice-Danguns. Five Ministries or Ohga were composed of Dotga (which means a pig), Gaeda (which means a dog), Soga (which means a cow), Malga (which means a horse) and Shinga according to their areas of east, west, south, north, and center. This ministry system using the name of animals were also used by Buyeo, which was a succession of Gojoseon. In wartime, five military troops of a central army, an advanced army, a left army and a right army were organized according to military commands by the general of central army. It is said that the traditional Korean game or Yut follows the structure of these five military structures. Generally, the succession system of the Supreme Dangun and the Vice-Dangun were judged by heredity, and sometimes the ruler could be succeeded by one of the Ohga, which shows that the sovereign's power was not absolute.

Gojoseon's location has been determined by the discovery of bronze wares from the Bronze Age and artifacts indicating the Iron Age. The territory of three Gojoseons has been identified by a unique style bronze sword. i.e., mandolin-shaped dagger (비파형동검, 琵琶形銅劍). The mandolin-shape dagger has been found in Liaoning, Manchuria, Korean Peninsula and even Hebei, indicating that the three Gojoseon territories covered at least the area shown on the inserted map. The shape of the mandolin-shape dagger of Gojoseon differs radically from those found in China and the composition of Gojoseon's bronze contains much more tin than those found in China. That lends evidence that the Bronze Age in Gojoseon differed from Chinese Bronze Age dramatically.

Scholars believe that people of the Three Confederate States of Gojoseon borrowed Chinese characters for Ma, Jin and Beon. "Jin," or sometimes "Shin," means "whole" or "general," indicating that Jinjosen stood as the central confederacy of Gojoseon. The vice Danguns governedAsadal (아사달), the legendary capital city of Jinjoseon governed by Dangun, and the other two Joseons. Joseon Sangosa says that Asadal corresponds to the current Harbin. Historical texts represent Jinjoseon as Jin. In 425 B.C.E., the name of Ancient Joseon changed to Great Buyeo, and the capital city moved to Jangdang. At that time, Jinjoseon lacked the power to conquer Beojoseon and Majoseon, leading to Gojoseon's gradual disintegration. At 239 B.C.E., Hae Mosu Dangun conquered Jinjoseon, and the state name changed to Buyeo.

Retrieved from https://www.newworldencyclopedia.org/p/index.php?title=Three_Confederate_States_of_Gojoseon&oldid=1084968
Categories:
Hidden category:
This page was last edited on 31 October 2022, at 21:05.
Content is available under Creative Commons Attribution/Share-Alike License; additional terms may apply. See Terms of Use for details.