Koreans point to Gija as a co-founder of Korean civilization along with Dangun. Dangun may have appeared on the scene in Manchuria as early as 3000 B.C.E., having ethnic roots in China, whereas Gija is alleged to have appeared from China in 1222 B.C.E., more than 1000 years, and maybe 2000 years, later. Historical documents specify the existence of Gija but not necessarily Gija Joseon. The matter of Gija and Gija Joseon actually existing may never find resolution but the importance of Gija and Gija Joseon to Korean's understanding of their origin, is indisputable.

Chinese records before the third century B.C.E. describe Gija as the paternal uncle (or brother, in other records) of the last emperor of the Chinese Shang Dynasty, the tyrannical King Zhou, but contain no mention of his relationship with Gojoseon. Tyrant King Zhou imprisoned Gija until the downfall of Shang Kingdom, when legend states thatKing Wu of Zhou released him.

Records written after the third century B.C.E., when China and Gojoseon warred, added that Gija led 5,000 people to the east of present-day Beijing, as written in the Geography of Hanshu from Han Dynasty (though some, especially in China, believe him to have moved to present-day Korea), and to have become the king of Gija Joseon. Previously, scholars widely believed Gija Joseon was located in present-day Korea, replacing Gojoseon of Dangun. Some scholars today believe that Gija settled west of Gojoseon, based on records from Geography of Hanshu, and Korean record of Samguk Yusa that suggests that Gojoseon continued to coexist with Gija Joseon after the migration of Gija. Those scholars maintain that Gija's influence was limited to the western part of Gojoseon, west of Liao River, as attested by Geographical Record of Hanshu, which recorded Gija migrating to the west of Liao River. Furthermore, the record in Samguk Yusa:

Later Dangun moved his capital to Asadal on T'aebaek-san and ruled 1500 years, until king Wu of Chou (ancient Chinese dynasty) placed Kija on the throne (traditional date 1122 B.C.E.). When Kija arrived, Tangun moved to Changtang-kyong and then returned to Asadal, where he became a mountain god at the age of 1908. [1]

The above suggests that Gija had a limited role in ancient Korean history. The Genealogy of the Seonwu Clan of Taewon (태원선우씨세보, 太原鮮于氏世譜) lists the names of forty one rulers of Gija Joseon and their periods of reign, although it is not widely accepted by mainstream historians. Some scholars believe that Wiman Joseon began with the usurpation of the throne from the line of kings descended from Gija.

Those records made no references to Jizi being associated with Joseon by King Wu or his seizing power in Joseon. Archaeological evidence suggests Chinese bronze culture differed dramatically from Korean bronze culture and Korea never used the Chinese writing system during that period. Until evidence put the Gija/Jizi theory into doubt, scholars widely believed that Gija Joseon located in current Korea, replacing Gojoseon of Dangun. Some scholars, who try to reconcile the Book of Han account with archaeological evidence, believe that Jizi settled west of Beonjoseon, based on the Book of Han's assertions and Korean record of Samguk Yusa, arguing that the records suggest that Gojoseon continued to coexist with Gija Joseon after the migration of Jizi. These scholars believe that Jizi's influence was limited to western Gojoseon, west of Liao River.

Historian Kim Jung-bae argues that the association between Jizi and Joseon has generally been disproven.[2] He believed that the Han Dynasty fabricated the existence of Gija Joseon and that Jizi established it as a state. He, and other historians holding similar views, point out that the Bamboo Annals and Confucius's Analects, constituting the earliest extant texts that referred to Jizi, said nothing about his going to Gojoseon. Similarly, the Records of the Grand Historian, written soon after the conquest of Wiman Joseon by Han, made no reference to Joseon in its discussions about Jizi[3] and made no reference to Jizi in its discussions about Joseon. Kim, and other scholars holding similar views, believe that the contradiction in the account arose from a confusion between Jizi and Gihun's ancestor, Gija. 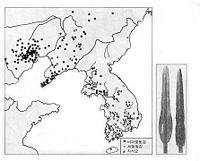 Scholar Shin Chaeho asserted that Gija Joseon (323 B.C.E.-194 B.C.E.) refers to the putative period of Beonjoseon, one of the Three Confederate States of Gojoseon, after Gihu (기후, 箕詡) became the king of Beonjoseon. Chinese traditional accounts see Gihu's ancestor, Gija, as the same person as Jizi (both written as 箕子 in Hanzi/Hanja), although such theories largely discredited due to lack of archaeological evidence supporting such accounts, and due to the lack of corroborating textual evidence from relatively contemporary Chinese accounts.

According to Sin Chaeho's Joseon Sangosa, Beonjoseon began disintegrating after a rebel from the Chinese state of Yan killed its king around 323 B.C.E. With the assassination of the king, the five ministers of Beonjoseon contended for the throne. Gihu joined in this struggle, emerging victorious as the new king of Beonjoseon by defeating the competitors for the throne. He established Gija Joseon, named after his ancestor Gija. During Gija Joseon, the king enjoyed strong sovereign powers. Eventually, in 94 B.C.E., Gija Joseon fell after Wei Man overthrew King Jun, establishing Wiman Joseon in its place.