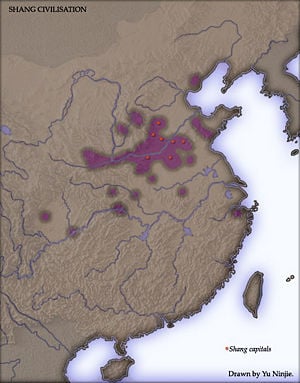 Remnants of advanced, stratified societies dating back to the Shang period have been found in the Yellow River Valley.

The Shāng Dynasty or Yīn Dynasty (ca. 1766 B.C.E. – ca. 1050 B.C.E.) is the first confirmed historic Chinese Dynasty and ruled in the northeastern region of the area known as "China proper," in the Yellow River valley. The Shāng dynasty followed the quasi-legendary Xià Dynasty and preceded the Zhōu Dynasty. Information about the Shang Dynasty comes from historical records of the Zhou Dynasty and from Shang inscriptions on bronze artifacts and oracle bones—turtle shells, cattle scapula or other bones on which were written the first significant corpus of recorded Chinese characters. The oracle bone inscriptions, which date to the latter half of the dynasty, typically recorded the date in the Sexagenary cycle of the Heavenly Stems and Earthly Branches, followed by the name of the diviner and the topic being divined about. An interpretation of the answer (prognostication) and whether the divination later proved correct (verification) were sometimes also added.

These divinations can be gleaned for information on the politics, economy, culture, religion, geography, astronomy, calendar, art and medicine of the period, and as such provide critical insight into the early stages of the Chinese civilization. One site of the Shang capitals, later historically called the Ruins of Yin, is near modern day Anyang. Archaeological work there uncovered 11 major Yin royal tombs and the foundations of palace and ritual sites, containing weapons of war and human as well as animal sacrifices. Tens of thousands of bronze, jade, stone, bone and ceramic artifacts have been obtained; the workmanship on the bronzes attests to a high level of civilization. Chinese writing dates from this period. In terms of inscribed oracle bones alone, more than 20,000 were discovered in the initial scientific excavations in the 1920s to 1930s, and many more have since been found. The Shang Dynasty was conquered by the Zhou Dynasty in 1122 B.C.E. What can be verifed about the Shang dynasty takes us back to the very earliest period of one of humanity's oldest civilizations, one that continues to this day. Linking of events in heaven with those on earth would remain a strong belief for centuries, thus some fundamental characteristics of Chinese culture were already evolving.

The Shang dynasty is believed to have been founded by a rebel leader who overthrew the last (still legendary) Xia ruler. Its civilization was based on agriculture, augmented by hunting and animal husbandry. The Records of the Grand Historian states that the Shang Dynasty moved its capital six times. The final and most important move to Yin in 1350 B.C.E. led to the golden age of the dynasty. The term Yin Dynasty has been synonymous with the Shang dynasty in history, although lately it has been used specifically in reference to the latter half of the Shang Dynasty.

A line of hereditary Shang kings ruled over much of northern China, and Shang troops fought frequent wars with neighboring settlements and nomadic herdsmen from the inner Asian steppes. The capitals, particularly that in Yin, were centers of glittering court life. Court rituals to propitiate spirits developed. In addition to his secular position, the king was the head of the ancestor- and spirit-worship cult. The king often performed oracle bone divinations himself, especially near the end of the dynasty. Evidence from the royal tombs indicates that royal personages were buried with articles of value, presumably for use in the afterlife. Perhaps for the same reason, hundreds of commoners, who may have been slaves, were buried alive with the royal corpse.

The Shang dynasty had a fully developed system of writing; its complexity and state of development indicates an earlier period of development, which is still unattested. Bronze casting and pottery also advanced in Shang culture. The bronze was commonly used for art rather than weapons. In astronomy, the Shang astronomers discovered Mars and various comets. Many musical instruments were also invented at that time. 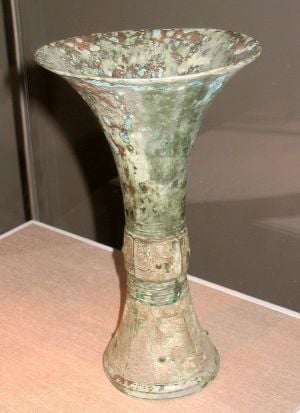 This bronze ritual wine vessel, dating from the Shang Dynasty in the thirteenth century B.C.E., is housed at the Arthur M. Sackler Gallery of the Smithsonian Institution.

Shang Zhou, the last Yin king, committed suicide after his army was defeated by the Zhou people. Legends say that his army betrayed him by joining the Zhou rebels in a decisive battle.

A classical novel Fengshen Yanyi is about the war between the Yin and Zhou, in which each was favored and supported by one group of gods.[1]

After the Yin's collapse, the surviving Yin ruling family collectively changed their surname from their royal Zi (pinyin: zi; Wade-Giles: tzu) to the name of their fallen dynasty, Yin. The family remained aristocratic and often provided needed administrative services to the succeeding Zhou Dynasty. The King Cheng of Zhou through the Regent, his uncle the Duke Dan of Zhou, offed the former Shang King Zhou's brother the ruler of Wei, WeiZi in the former Shang capital at Shang with the territory becoming the state of Song. The State of Song and the royal Shang descendants maintained rites to the dead Shang kings which lasted until 286 B.C.E.[2]

Both Korean and Chinese legends state that a disgruntled Yin prince named Jizi, who had refused to cede power to the Zhou, left China with his garrison and founded Gija Joseon near modern day Pyongyang to what would become one of the early Korean states (Go-, Gija-, and Wiman-Joseon). Though Jizi is mentioned a few times in Shiji, it is thought that the story of his going to Joseon is but a myth.

Written records found at Anyang confirm the existence of the Shang dynasty. However, Western scholars are often hesitant to associate settlements contemporaneous with the Anyang settlement with the Shang dynasty. For example, archaeological findings at Sanxingdui suggest a technologically advanced civilization culturally unlike Anyang. The evidence is inconclusive in proving how far the Shang realm extended from Anyang. The leading hypothesis is that Anyang, ruled by the same Shang in the official history, coexisted and traded with numerous other culturally diverse settlements in the area that is now referred to as China proper.

Chinese historians living in later periods were accustomed to the notion of one dynasty succeeding another, but the actual political situation in early China is known to have been much more complicated. Hence, as some scholars of China suggest, the Xia and the Shang can possibly refer to political entities that existed concurrently, just as the early Zhou (successor state of the Shang), is known to have existed at the same time as the Shang.

Furthermore, though Anyang confirms the existence of the last nine or so sovereigns of the Shang dynasty, no evidence has been unearthed proving the existence of the Shang dynasty before its move to its last capital. How much, if any, of the official history covering the period predating the move was fabricated (possibly as part of a legitimacy myth) is not understood.

Perhaps the most significant aspect of the cultural legacy of this period is the invention of writing. Although no documents survive, bronze and bone inscriptions have. These provide the earliest evidence of writing in China. The system used pictures, and later Chinese ideographic writing developed from this. The Shang believed that events on earth were linked with those in heaven and that the dead, as spirits, still maintained an interest in the living. This would later develop into the sophisticated system of ancestor reverence that characterized Chinese religion. Sacrifices were offered to the sun, moon and other heavenly bodies. Later, the concept of Heaven (t'ien) and of the need for the rulers of China to keep their peace with Heaven, and to enjoy Heaven's approval and blessing, would evolve.[3]

Sovereigns of the Shang Dynasty