Animal husbandry, also known as animal science, is the agricultural practice of breeding and raising livestock. An outgrowth of agricultural practices and techniques of farmers for centuries, the commercialization of agriculture and the advances of veterinary science during the twentieth century helped to establish a recognized scientific discipline that is taught in many universities and colleges and used all over the world. 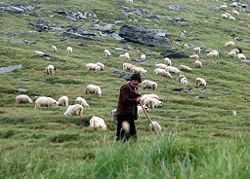 Shepherd with his sheep in Făgăraş Mountains, Romania.

Because of agriculture, cities, as well as trade relations between different regions and groups of people, developed, further enabling the advancement of human societies and cultures. Animal husbandry, as well as other forms of agriculture, has been an important aspect of economics throughout the centuries prior to and after the Industrial Revolution. Sustainable development of world food supplies impacts the long-term survival of human beings and all domesticated species, so care must be taken to ensure that agricultural methods remain in harmony with the environment. Breeding animals requires adequate care and concern for the impact of genetic modification, pollution, and hybridization on the species. The ethical aspects of breeding animals in captivity have also become matters of greater concern as humankind advances in awareness of its responsibility toward the environment and all living things. 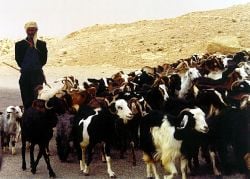 A man herding goats in Tunisia.

The first animals to be domesticated were sheep, goats, pigs, cattle, and horses in ancient Middle Eastern and Asian societies. The domestication of these animals marked an important watershed in the history of agriculture, as it allowed societies to move away from hunter-gathering traditions.[1] Early agriculturists used animals extensively for labor, food, and raw materials, but also realized, without the help of modern understanding of genetics, that specific breeding practices could potentially yield more beneficial traits in animal offspring. Their methods of breeding were based solely on observable traits, so that animals with obviously beneficial traits were bred to produce offspring with combined desirable characteristics.[2] Commonly, this was achieved by pairing two desirable animals during times of female ovulation, and allowing the animals to breed. However, since two healthy animals will not always breed on their own, artificial insemination was developed, first employed by the Arabs in fourteenth century. Others attempted similar techniques, particularly early European scientists interested in genetics.[3] While these methods were sophisticated for the times they were used, they often produced mixed results.

In the twentieth century, with the advent of genetic science, the manipulation of animal genes with the desired result of more advantageous offspring became more successful. By understanding the mechanics of genetic transmission from parent to offspring, scientists were able to breed animals in a more precise manner. Coupled with new advances in general veterinary science, nutrition, and the commercialization of farms, animal husbandry became more systematic, so as to yield higher quality animals, in shorter time frames, and for less money. More recent trends have also attempted to bring in older traditions involving emotional care and attachment to the animals cared for the benefit of their development.[4]

Domestication refers to the process of taming a population of animals (although it can also be used to refer to plants) or even a species as a whole. Human beings have brought these populations under their care for a wide range of reasons: To produce food or valuable commodities (such as wool, cotton, or silk), for help with various types of work, transportation, and to enjoy as pets or ornamental plants. Animals domesticated for home companionship are usually called pets while those domesticated for food or work are called livestock or farm animals.

According to evolutionary biologist Jared Diamond,[5] animal species must meet six criteria in order to be considered for domestication:

A herding instinct arguably aids in domesticating animals: Tame one and others will follow, regardless of chiefdom. Yet, despite long enthusiasm about revolutionary progress in farming, few crops and probably even fewer animals ever became domesticated.

Domesticated species, when bred for tractability, companionship, or ornamentation rather than for survival, can often fall prey to disease: Several sub-species of apples and cattle, for example, face extinction; and many dogs with very respectable pedigrees appear prone to genetic problems.

Domestication has also threatened human beings with disease. Cattle have given people various viral poxes, measles, and tuberculosis; pigs gave influenza; and horses the rhinoviruses. Humans share over sixty diseases with dogs. Many parasites also have their origins in domestic animals.

Animals of domestic origin as well as feral animals sometimes produce fertile hybrids with native, wild animals which leads to genetic pollution in the naturally evolved wild gene pools, many times threatening rare species with extinction. Cases include the mallard duck, wild boar, the rock dove or pigeon, the Red Junglefowl (Gallus gallus) (ancestor of all chickens), and carp. Another example is the dingo, itself an early feral dog, which hybridized with dogs of European origin.

Genetic pollution is a serious issue:

Living organisms can also be defined as pollutants, when a non-indigenous species (plant or animal) enters a habitat and modifies the existing equilibrium among the organisms of the affected ecosystem (sea, lake, river). Non-indigenous, including transgenic species (GMOs), may bring about a particular version of pollution in the vegetal kingdom: So-called genetic pollution. This term refers to the uncontrolled diffusion of genes (or transgenes) into genomes of plants of the same type or even unrelated species where such genes are not present in nature. For example, a grass modified to resist herbicides could pollinate conventional grass many miles away, creating weeds immune to the most widely used weed-killer, with obvious consequences for crops. Genetic pollution is at the basis of the debate on the use of GMOs in agriculture.[6]

A Genetically Modified Organism (GMO) is an organism whose genetic material has been altered using the genetic engineering techniques generally known as recombinant DNA technology. Genetic Engineering today has become another serious and alarming cause of genetic pollution because artificially created and genetically engineered animals in laboratories, which could never have evolved in nature even with conventional hybridization, can live and breed on their own and, what is even more alarming, interbreed with naturally evolved wild varieties. 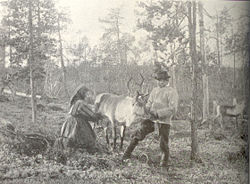 Reindeer being milked by Sami people. 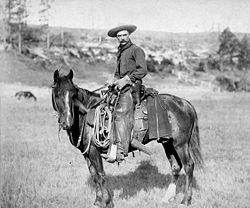 Historically, animal husbandry is broken up into animal subdivisions, agriculturists tending to specialize on one or two types of animals. Below is a list and brief description of some of the major subdivisions:

There are contrasting views on the ethical aspects of breeding animals in captivity, with one debate being in relation to the merits of allowing animals to live in natural conditions reasonably close to those of their wild ancestors, compared to the view that considers natural pressures and stresses upon wild animals from disease, predation, and the like as vindication for captive breeding.

Some techniques of animal husbandry such as factory farming, tail docking, the Geier Hitch, and castration, have been attacked by animal welfare groups as inhumane, unsanitary, and counterproductive to the overall benefit of society.[7]

Some of these practices also are criticized by farmers who use more traditional or organic practices. Genetic engineering is also controversial, though it does not necessarily involve suffering. People who believe in animal rights generally oppose all forms of animal husbandry.[8]

Animal husbandry and animal sciences are taught around the world in colleges and universities. Students of animal science sometimes go on to pursue degrees in veterinary medicine following graduation, or pursue master's degrees or doctorates in disciplines such as nutrition, genetics and breeding, or reproductive physiology. A strong demand for knowledge and experience in the science of breeding and raising animals in the world wide agricultural markets helps graduates of these programs find work in the veterinary and human pharmaceutical industries, the livestock and pet supply and feed industries, as well as in academia.