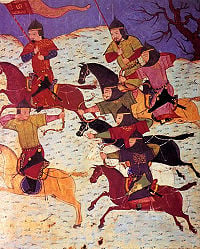 The Mongol invasions of Korea (1231 - 1273) consisted of a series of campaigns by the Mongol Empire against Korea, then known as Goryeo, from 1231 to 1259. Six major campaigns took place at tremendous cost to civilian lives throughout the Korean Peninsula, ultimately resulting in Korea becoming a tributary ally of the Mongol Yuan Dynasty for approximately 80 years. In 1350, Goryeo succeeded in throwing off the Mongol tributary yoke.

Goryeo faced the first life and death test as a unified nation on the Korean Peninsula. Standing at the twilight in its dynastic cycle, Koreans rose to support their country even though a dictatorship ruled with a cruel hand in the royal court. The Buddhist community rose to meet the challenge, as they later rose during Japan's invasion of Korea in the late 1500s, monks fighting in the Hwarang tradition to repel the invading Mongols. Eventually, after 40 years of invasions and 80 years of tributary rule, Goryeo survived as a unified nation.

Goryeo's first contact with the Mongols had been friendly. They cooperated to defeat the Khitans who had caused turmoil in northern Goryeo for two years. Khitan surrendered to a combined Mongol-Goryeo force, leading the Mongols to force a tributary status on Goryeo requiring a heavy annual tribute from 1219 which on occasion Gojong of Goryeo (r. 1213-1259), who reigned as the twenty-third king of the Goryeo dynasty, refused to pay. In 1225, the Koreans killed the Mongol envoy Chu-ku-yu while traveling back to China.

In 1231, using the killing of Chu-ku-yu as a pretext, Ögedei Khan ordered the invasion of Korea. The Mongol general Sartaq met determined resistance in Kuseong, redirecting his forces toward the capital city of Kaeseong. In 1232, the Imperial Court of Goryeo moved from Songdo to Ganghwa Island in the Bay of Gyeonggi, and started the construction of significant defenses to prepare for the Mongol threat. Goryeo's move to Ganghwa Island exploited the Mongols weakness; attacking over water. The Mongols protested the move, and immediately launched a second attack.

Although they reached parts of the southern peninsula, the Mongols failed to capture Ganghwa Island, experiencing defeat in Gwangju. A monk Kim Yun-Hu (김윤후) killed the Mongol leader Sartai (撒禮塔) in strong civilian resistance at Yongin in 1232, forcing the Mongols to withdraw again. That represents the only known occasion of the commander of a Mongol Army being killed in battle. Before the Mongols finally departed Goryeo, they launched six invasions.

In 1235, the Mongols began a campaign that ravaged parts of Gyeongsang and Jeolla Provinces. Civilians put up strong resistance, the Imperial Court at Ganghwa attempting to strengthen its fortress. Korea won several victories but the Korean military collapsed from the waves of invasions. In 1236, Gojong ordered the re-creation of the Tripitaka Koreana, destroyed during the 1232 invasion. The collection of Buddhist scriptures took 15 years to carve on some 81,000 wooden blocks, a National Treasure, still preserved in Haeinsa, South Korea.

In 1238, Goryeo relented, suing for peace. The Mongols withdrew, in exchange for Goryeo's agreement to send the Imperial Family as hostages. Goryeo sent an unrelated member of the imperial line. Incensed, the Mongols demanded clearing the seas of Korean ships, relocation of the court to the mainland, the hand-over of anti-Mongol bureaucrats, and, again, the Imperial family as hostages. In response, Korea sent a distant princess and ten children of nobles, rejecting the other demands.

In 1247, the Mongols began the fourth campaign against Goryeo, again demanding the return of the capital to Songdo and the Imperial Family as hostages. With the death of Guyuk Khan in 1248, the Mongols withdrew again. Upon the 1251 ascension of Mongke Khan, the Mongols repeated their demands. When Goryeo refused, the Mongols launched a massive campaign in 1253. Gojong finally agreed to move the capital back to the mainland, and sent one of his sons, Prince Angyeonggong (안경공, 安慶公) as a hostage. The Mongols withdrew thereafter.

The Mongols later learned that top Goryeo officials remained on Ganghwa Island, and had punished those who negotiated with the Mongols. Between 1253 and 1258, the Mongols under Jalairtai launched four devastating invasions in the final successful campaign against Korea. Jalairtai waged cruel campaigns against the people of Goryeo. The common people sought refuge in mountain fortresses and coastal islands. The mountain fortresses became central points of resistance against the Mongols. In 1254, Jalairtai cruelly slaughtered countless people in captured fortresses taken by siege, taking 200,000 captives with them. The total and complete devastation of the rural areas brought Goryeo to ruin.[1]

Two parties within Goryeo struggled for control of Goryeo's policy: the literati party opposed the war with the Mongols, while the military junta led by the Choe clan pressed for continuing the war. When the literati party murdered the dictator Choi, Goryeo concluded a peace treaty with the Mongols.[2] The treaty permitted the sovereign power and traditional culture of Goryeo, implying that the Mongols gave up conquering Goryeo under their direct control.

Internal struggles within the royal court continued regarding the peace with the Mongols until 1270. Since Choe Chung-heon, Goryeo had been a military dictatorship, actually ruled by the private army of the powerful Choe family. Some of those military officials formed the Sambyeolcho Rebellion (1270-1273), resisting in the islands off the southern shore of the Korean peninsula. Beginning with King Wonjong, for approximately 80 years, Korea served as a tributary ally of the Mongol Yuan Dynasty. The Goryeo dynasty survived under Mongolian influence until King Gongmin began to push Mongolian forces back around 1350.