Ganghwa Island (江華島), known as the first line of defense for the capital city of Seoul and the royal palaces of the Joseon Dynasty, played a key role in the opening of Korea to the world. When Japan, Russia, France, and the United States knocked at the Hermit Kingdom's front door, the cannons of the fortress at Ganghwa Island greeted them. The royal court's hope was that intruders would see Korea as an unattractive catch, not worth the trouble of an armed conflict.

About 65,500 people live on the island. With an area of 302.4 km², the island makes up most of Ganghwa-gun, a division of Incheon Municipality. Legend states that Dangun, the mythological founder of Korea, made an altar on top of beautiful Mount Mani-san, Gangwha's highest point at 469 meters above sea level, and offered sacrifices to his ancestors. [1]

Strategically positioned at the mouth of the Han River, Ganghwa Island has often played a key role in historical events. In the ninth century, Unified Silla established a garrison on the island to combat piracy. [2] The commander Wang Geon established his military reputation at the garrison, later going on to found the kingdom of Goryeo.[3] In the thirteenth century, the court of Goryeo took refuge on the island as Mongol forces invaded in 1232.[4] After Goryeo capitulated to the Mongols, the elite forces on the island rose up, beginning the Sambyeolcho Rebellion.[5] During the Manchu invasion of 1636, the Joseon court sought to follow the Goryeo example, but the royal refugees were captured by the invaders. [6] 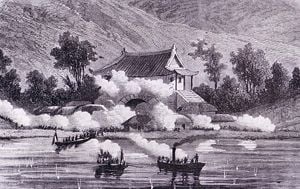 In the nineteenth century, as outside powers sought to enter Korea by sea, Ganghwa became a point of contact rather than a refuge. In the early ninteenth century, Christianity (Catholicism) took root in Korea opposed by the Daewongun and conservatives in the Korean court. In 1866, distressed by the rapidly growing numbers of Korean converts to Catholicism, as well as the humiliation suffered by China at the hands of Westerners during the Opium Wars, the Korean court persecuted the French missionaries, massacring French Catholic missionaries and Korean converts alike. That same year France launched a punitive expedition against Korea, occupying portions of Ganghwa Island in the fall of 1866.

In the first battle, the Korean infantry division suffered heavy losses heavily. General Yang Haun-Soo concluded that only a large cavalry division could stand up to French firepower. The French suffered casualties in an ambush by Korean forces on a French party attempting to occupy the Cheondeung Temple 傳燈寺 strategically located on the island‘s south coast. Aware from the beginning of the expedition that they lacked the forces to defeat Korea, the French fleet bombarded Seoul, recovering the two surviving French priests before steaming to Japan. In Korea, the incident received the name byeong-in yang-yo, or foreign disturbance of the byeong-in year (1866). 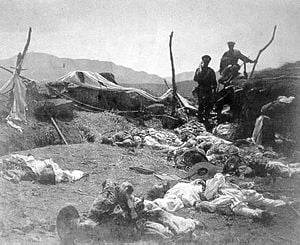 The U.S. Asiatic Squadron occupied the island in May 1871 in retaliation for the massacre of sailors aboard the stranded merchant marine schooner USS General Sherman in Pyongyang in 1866. The squadron hoped to use the opportunity to establish trade and diplomatic relations with Korea. Koreans justified the slaughter of the sailors aboard the General Sherman with the accusation that American sailors had killed Korean inhabitants, plundered the coastal area, and kidnapped a military officer. No evidence confirming those charges has been found. The Korean account relates that angered Korean locals burned the stranded General Sherman after killing the sailors.

General Rodgers, commander of the U.S. Asiatic Squadron, sought a direct route by water to the Korean capital Hanyang (present-day Seoul). Encountering Ganghwa Island, he made contact with Korean locals. Misunderstanding between the both sides brought them into conflict. Rodgers made clear that the U.S. fleet would investigate the area without hostile intentions. The Korean fortress opened fire on the fleet as they passed. Rodgers requested a meeting to negotiate, which the Korean commander rejected. The Korean fortress commander is rumored to have replied: “We have been living 4,000 years without any treaty with you, and we can't see why we shouldn't continue to live as we do.” He opened fire on the fleet. The Korean cannons, improperly aligned, missed the ships. The American fleet bombarded the fortresses, taking the position, with marines storming the stronghold.

In 1875 a Japanese ship, Unyo, while exploring the coast line on a charting expedition, received fire from the fortress on the Ganghwa Island. When the Unyo launched a crew boat to the island, the garrison fired on them (Ganghwa Island incident). Japan demanded a treaty with Korea following the incident. Early in the following year, Japan sent a large force of the Imperial Japanese Navy to force the negotiation of a treat, the Treaty of Ganghwa resulting. That agreement, concluded on Ganghwa Island, officially opened Korea to Japanese trade. Trade had also taken place between the two peoples in earlier centuries long before Korea became a Hermit Kingdom.