Gyeongbokgung, at the height of its glory, provided an astounding example of Confucian royal architecture and court life. Even though Gyeongbokgung had most of its buildings dismantled during the Japanese occupation of Korea, still the splendor of its former glory is seen in the structures that remain. Gyeongbokgung is the home of two National treasures. Those familiar with the writing of Korean Confucians and Neo-Confucians, will find Gyeongbokgung a trip into an impressive and inspiring world.

Gyeongbokgung ("Shining Happiness") is a classic example of Korean palace grounds. Built in accord with the Chinese model, the palace sits near the center of Seoul and faces the south, located at the foot of mountains that surround the grounds. Gyeongbokgung (Gyeongbok Palace) is the main, and largest, royal palace built during the Joseon Dynasty and one of the "Five Grand Palaces."

Joseon dynasty kings lived in Gyeongbokgung from soon after the founding of the dynasty until the Hideyoshi Invasion of Korea in 1592, when the royal family moved to nearby Doksu palace. In 1395, Taejo of Joseon, the founder of the Joseon dynasty, ordered Jeong Do-jeon, a renowned Korean architect, to design and build a palace on the exact spot he pointed out. During the Japanese invasions of Korea (1592-1598), Korean slaves seeking to destroy records of their bondage burnt down the palace. The palace grounds remained in ruins until 1865, when Gojong of Korea's court began rebuilding the palace.

The project of rebuilding Gyeongbokgung to the original dimensions of 330 buildings with 5,792 rooms, covering 4,414,000 square feet (410,000 square meters), required seven years and a royal fortune. Gojong and his court moved into the reconstructed palace grounds in 1872. Soon after the assassination of Empress Myeongseong instigated by the Japanese agents in 1895, Gojong of Korea left the palace, and the imperial family never returned.

In 1911, during the period of Korea under Japanese rule, the government of Japan demolished all but ten buildings, constructing the residence of the Japanese Governor-General in front of the throne hall.

Gwanghwamun (Gate of Transformation by Light) is a central land mark in present day Seoul, standing in front of the city government buildings. During the height of the Joseon dynasty, government buildings lined the broad avenue leading up to the gate. Gwanghwamun had three arched entrances, the center entrance reserved only for the king. Hae T'ae (Sea Monsters), two large mythical creatures sit next to the gate intended to protect the palace from fire. Currently undergoing restoration, Gwanghwamun is expected to regain its original appearance by 2009.

Gyeongbokgung boasted three additional main gates built in 1865: East Gate (Gate of Establishing Spring), used only by the royal family, and North Gate (Gate of the Divine Warriors) used only by the king, still stand in their original places. The West Gate (Welcoming Autumn Gate), dismantled in 1926, allowed entrance to those coming to the palace on general business. A palace wall connected the gates and surrounded the complex. Parts of the east, north, and west walls still stand.

Geunjeongjeon, the Imperial Throne Room (National treasures of South Korea No. 223), stands directly behind the present day government buildings. A magnificent gate, Gunjoengmun (Gate of Government by restraint) leads to Geunjeongjeon. An expansive stone courtyard surrounding the Imperial Throne Room greets the subject. A tile-roofed corridor runs the four sides around the court yard. At one time or another, 500 of various sizes stood there. Today only sixteen remain.

A straight path runs from Gunjoengmun to the Imperial throne room. Stone tablets marked with numbers indicating rank, line both sides of the path in rows accommodating the nine ranks of court officials. Gyeongbokgung sits on a stone platform that is constructed in two levels. The Imperial Throne Room imposingly dominates the entire palace area. An expansive double-tier roof is supported by two gigantic posts. The royal throne platform is within the building near the rear and in the center. The king met with all persons of importance in that room.

Gyeonghoeru Pavilion (National treasures of South Korea No. 224) sits in a beautiful setting, appearing to float on a mirror-like pond that surrounds it. During the Joseon Dynasty, the king frequently hosted royal banquets with courtly entertainment. The two story pavilion boasts an open banquet hall with forty-eight supporting pillars on the first floor. The smaller upper banquet room hosted the kings more intimate celebrations and feasts, accommodating up to 100 people. First constructed by the Joseon dynasty founder, Taejo of Joseon, as a small hosting pavilion, Taejong of Joseon expanded the pavilion to the present dimensions in 1412. The pavilion is depicted on the South Korean 10,000 won bill.

Sitting to the north of the palace grassy mall and Gyeonghoeru Pavilion is the spectacular Gyangwoenjoeng Pavilion. The exquisite pavilion, pictured at the beginning of this article, captures the peace and tranquility that a Confucian king would seek. Truly, the Lotus Pavilion is fit for a king. Whereas the Gyeonghoeru Pavilion conveys royal power and generosity, the Gyangwoenjeong pavilion conveys the peace and happiness sought by royalty in quiet moments. Together they represent the two moods of the Confucian gentleman. 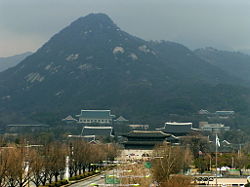 Gyeongbokgung and Cheong Wa Dae, with Bukhansan in the background

The Blue House. The back garden of the Palace had been used as the Governor-General's residence during the Japanese era. With the establishment of the Republic of Korea in 1948, President Syngman Rhee used it as his office and residence. In 1993, after President Kim Young-sam's civilian administration was launched, the Japanese governor-general's residence in the Cheong Wa Dae compound was dismantled to remove a major symbol of the Japanese colonial occupation.

Retrieved from https://www.newworldencyclopedia.org/p/index.php?title=Gyeongbokgung&oldid=1005702
Categories:
Hidden category:
This page was last edited on 21 July 2017, at 15:23.
Content is available under Creative Commons Attribution/Share-Alike License; additional terms may apply. See Terms of Use for details.