The National Museum of Korea is the repository for the national and cultural treasures of Korea, both North and South. Although the museum envisions itself has a museum for all Korea, the lack of access to explore and recover artifacts in North Korea has severely limited the collection to the South since the Korean War. Still, artifacts gleened when Seoul ruled as the capital city for all Korea during the Joseon Dynasty grace the collection. The displays of National treasures within the museum provide a profound look into the soul of Korea through documents and artifacts revealing the art, religion, history, and science of Koreans over history.

The National Museum of Korea, the flagship museum of Korean history and art in South Korea, represents Korea culturally. Established in 1945, the museum opened in a new building in Yongsan Family Park in Seoul, October 2005. The museum's collection holds over 150,000 pieces with 11,000 on display at one time. The largest museum in Asia, and the sixth-largest museum in the world in terms of floor space, The National Museum covers 307,227 square feet.

Measures to protect the treasures inside the museum include engineering the building to withstand a magnitude 6.0 Richter Scale earthquake. The display cases for artifacts have been equipped with seismic-protective platforms to absorb shocks and trembles. An imported natural lighting system utilizes sunlight instead of artificial lights and an air purification system has been designed to protect the art and artifacts of the museum. The museum has been made with fire-resistant materials.

To design the new building, the Korean government held an international competition open to architects around the world to submit a proposal for the new building. Architects from 59 countries submitted 854 entries. Chang-Il Kim of Junglim Architects & Engineers Ltd. submitted the winning design, inspired by the idea of a traditional Korean fortress. Oblong in shape, the building looks like a Korean fortress, extending 404 meters in length, and six-stories in height; indigenous plants and gardens surround the building.

Site of the National Museum of Korea, 1995

Emperor Sunjong established Korea's first museum, the Imperial Household Museum, in 1908 in the waning days of the Joseon Dynasty. The collection of the Imperial Household Museum at Changgyeonggung and the later Japanese Government General Museum, during the Japanese rule of Korea, became the nucleus of the National Museum's collection established when South Korea gained independence in 1945.

During the Korean War, the government safely moved the 20,000 of the museum's pieces to Busan to avoid destruction. When the artifacts came back to Seoul after the war, curators housed them in Gyeongbokgung and Deoksugung Palace. In 1972, the museum moved again to a new building on the grounds of the Gyeongbokgung palace. The museum moved again in 1986 to the Jungangcheong, the former Japanese General Government Building, which housed the museum until demolition in 1995.

Layout of the Museum 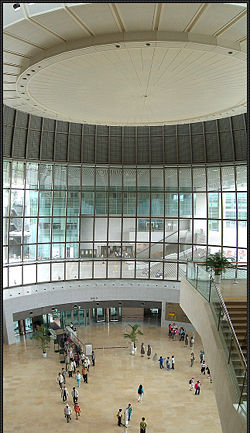 Hall of the National Museum of Korea

The museum has three levels. Symbolically, the left side of the museum represents the past while the right side of the museum represents the future. The first floor contains the Archaeological Gallery containing approximately 4,500 artifacts from the Paleolithic to the Balhae era. Ten exhibition rooms comprise the gallery: the Paleolithic Room, Neolithic Room, Bronze Age and Early Iron Age Room, Proto Three Kingdoms Room, Goguryeo Room, Baekje Room, Gaya Room, Silla Room, Unified Silla Room, and Balhae Room. The Neolithic and Bronze Age Rooms present artifacts and information from important prehistoric sites and settlements including the Bangudae Petroglyphs and Songgung-ni.

Finally, also on the third floor, the Asian Arts Gallery contains 970 pieces exploring the similarities and divergences of Asian Art as well as the confluence of Asian and Western art via the Silk Road. Six rooms make up the gallery: Indonesian Art Room, Central Asian Art Room, Chinese Art Room, Relics from Sinan Seabed Room, Nangnang Remains Room, and Japanese Art Room. The grounds of the museum contain parks, gardens of indigenous plants, waterfalls and pools, a collection of pagodas and other outdoor Korean art.

National Treasures in the National Museum of Korea 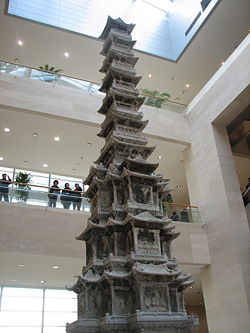 The measure of the importance of the National Museum of Korea is the vast number and quality of National treasures housed in the collection. The following list of National Treasures among the 100 highlighted exhibits in the museum.

National Treasure No. 3: The Stele Built to Honor the Expedition of Silla's King Jinheung: [1]

King Jinheung (540-576) erected a stele on Mt. Bukhansan around the year 555 to mark expanded Silla territory.

From the Pagoda at the Monastic site of Hwangboksa (Buddha).

From the Pagoda at the Monastic site of Hwangboksa (Buddha). Made of pure gold, treasures 79 and 80 attracted much attention. Crafted in 692 and 706 respectively.

Bangasayusang, National Treasure No.83 is one of the most popular works at the museum

From the first century C.E., crafted from pure gold. A huge dragon decorates the center, around which six small dragons crowd. W 9.4cm

Goryeo, twelfth century, H 37.5cm. A ritual ewer similar to those used by Brahmans and Buddhist monks in ancient Inda. 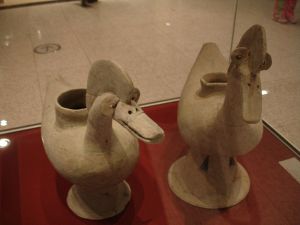 Duck-shaped pottery at the National Museum of Korea.

National Treasure No. 119: Buddha with Inscription of the Seventh Year of Yeonga [18]

Goguryeo, 539, H 16.2cm. The skirt like a fin and slender face convey a Chinese influence.

Unified Silla, eighth century, H 16.4cm. With the advent of Buddhism in Silla, cremation became widespread. This funeral urn is from the Silla period.

Unified Silla, eighth century. The oldest wood printing block print in the world, found in the Seokgatap Pagoda at Bulguksa.

Goryeo, 1390. The oldest paper document in the collection owned by the National Museum of Korea. The document has proven valuable in understanding the house registry during the Joseon Dynasty.

Bronze Age, This artifact has the patterns of ritual tools used by a shaman; a mirror, a dagger, and bells. 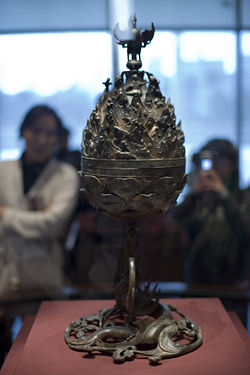 One of the most beautiful inlaid white porcelains from Joseon period.

Silla, fifth century. Made of clay, shaped in the images of people, animals, daily life tools express the folk belief and emotion of the time.

Joseon, fifteenth century. A masterpiece of beauty of Buncheong ware.

Joseon, fifteenth century. a turtle-shaped bottle use for water and liquor in Joseon period.

Goryeo, eleventh century. When Kitan invaded Gaegyeong in 1011, Goryeo King Hyeonjong ordered Chojo Tripitaka to be made. These are pages from that printing.

Goryeo, 1010. Buddhist bell of Cheonheungsa is the most beautiful bell in Goryeo period.

Other National Treasures in the National Musuem collection follow: