Balhae stands in the direct line of the mythical foundation of Korea in Dangun (2333 B.C.E.) and legendary foundation in Gija (1222 B.C.E.). Controversy boils between Chinese, North Korean, and South Korean archaeologists and anthropologists over the origin of the northern kingdoms, including Balhae. Many Chinese scholars claim Balhae and previous kingdoms as provinces of China whereas many Korean scholars claim indigenous roots for the northern Korean people. The argument has political overtones as a way to lay claim to the territory of former Gojoseon, Goguryeo, and Balhae. Regardless, the influence of China upon northern Koreans has been pronounced. Stele from Balhae at the National Museum of Korea.

The earliest extant recorded mention of Balhae come from the Book of Tang, compiled between 941 to 945. Southern Manchuria(Northeast China) and northern Korea existed previously as the territory of Goguryeo, one of the Three Kingdoms of Korea. Goguryeo fell to the allied forces of Silla and the Tang Dynasty in 668. The Tang annexed much of western Manchuria, while Silla unified the Korean Peninsula south of the Taedong River and became Unified Silla. The "New Book of Tang" recorded that the founder of Balhae, Dae Joyeong (大祚榮) had served as a Goguryeo general of Sumo Mohe stock[2]. According to the "Book of Tang," Dae Joyeong belonged to a minority tribe in Goguryeo[3]. And the Memorabilia of the Three Kingdoms (i.e., Samguk Yusa) written several hundred years later states that he had Goguryeo lineage.

The second king Mu, who felt encircled by Tang, Silla and Black Water Mohe along the Amur River, attacked Tang and his navy briefly occupied a port on the Shandong Peninsula in 732. Later, Tang and Balhae forged a compromise resuming tributary missions to Tang. He also sent a mission to Japan in 728 to threaten Silla from the southeast. Balhae kept diplomatic and commercial contacts with Japan until the end of the kingdom. Because of its proximity to many powerful states, Balhae became a buffer zone for the region.

The third king Mun expanded its territory into the Amur valley in the north and the Liaodong Peninsula in the west. He also established Holhanseong, the permanent capital near Lake Jingpo in the south of today's Heilongjiang province around 755. During his reign, Balhae established a trade route with Silla, called Sillado. By the eighth century, Balhae controlled northern Korea, all of Northeastern Manchuria(Northeast China), the Liaodong peninsula, and present day Primorsky Krai of Russia. Balhae's strength forced Silla to build a northern wall in 721 as well as maintain active defenses along the common border.

Traditionally, historians believed that the ethnic conflicts between ruling Koreans and underclass Malgal weakened the state. Recent study suggests that the catastrophic eruption in the tenth century of Baekdu Mountain located at the center of Balhae territory led to the downfall of Balhae. Baekdu mountain still has one of the biggest volcanic caldera in the world Heaven Lake. Ashes of that eruption can still be found in a large area, even in a sedimentary layer in northern Japan. That massive explosion created tremendous volcanic ash, damaging agriculture and even societal integrity. The Khitans took advantage of that natural disaster.

Eventually, Balhae succumb to the Khitans, an emerging power in the Liaoxi area (east of current Beijing area). After destroying Balhae in 926, the Khitan established the puppet Dongdan Kingdom, followed shortly thereafter by the annexation by Liao in 936. Liao moved some Balhae aristocrats to Liaoyang but Balhae's eastern territory remained politically independent. Some Balhae people including aristocrats (est. one million), led by the last Crown Prince Dae Gwang-Hyun (대광현), fled southward to Goryeo, the new self-claimed successor of Goguryeo (934). Many descendants of the Balhae royal family in Goryeo, changed their family name to Tae (태,太) while Crown Prince Dae Kwang Hyun received the family name Wang (왕,王), the royal family name of Goryeo dynasty. Balhae stands as the last state in Korean history to hold any significant territory in Manchuria (Northeast China), although later Korean dynasties continued to regard themselves as successors of Goguryeo and Balhae. That began a series of northern expansions of later Korean dynasties.

The Khitans themselves eventually succumbed to the Jurchen people, who founded the Jin Dynasty. The Jin dynasty favored the Balhae people as well as the Khitans. Jurchen proclamations emphasized the common descent of the Balhae and Jurchen people from the seven Wuji(勿吉) tribes, and proclaimed "Jurchen and Balhae are from the same family." Balhae consorts mothered the fourth, fifth and seventh emperors of Jin. The thirteenth century census of Northern China by the Mongols distinguished Balhae from other ethnic groups such as Goryeo, Khitan and Jurchen. That suggests that the Balhae people still preserved their identity even after the conquest of the kingdom.

After the fall of Balhae and its last king in 926, new Khitan masters renamed it Dongdan[4], who had control over most of Balhae's old territories. Starting from 927, many rebellions errupted throughout the domains. Those rebellions eventually turned into several Balhae revivals. Out of those, only three succeeded and established kingdoms: Later Balhae, Jung-Ahn Kingdom, and Dae-Won Kingdom. Those three kingdoms temporarily chased the Khitan and their Dongdan Kingdom out into the Liaodong peninsula, but the Liao Empire eventually decimated them all.

In 934, Dae Gwang-Hyun, the last Crown Prince of Balhae, revolted against their Khitan masters. After being defeated, he fled to Goryeo, where he received protection and the imperial surname. That resulted in the Liao breaking off diplomatic relations with Goryeo, but without threat to invade. [5]

The people of Balhae derived from former Goguryeo people and of several Tungusic peoples present in Manchuria (Northeast China), the Mohe (Malgal) made up the largest element. Heavily influenced by Tang China's culture and government, Balhae modeled its system of government upon that of Tang China, and to an even greater extent than Silla. The government operated three chancelleries and six ministries, modeling its capital, Sanggyong, after Chang'an, the capital of the Tang Dynasty. In addition, Balhae sent many students to Tang China to study, and many went on to take and pass the Chinese civil service examinations.[6][7]

At the end of the twentieth century, an important source of cultural information on Balhae had been discovered at the Ancient Tombs at Longtou Mountain, especially the Mausoleum of Princess Jeong-Hyo. 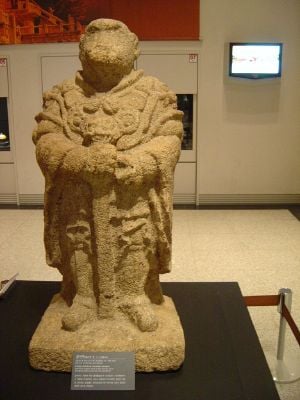 A monkey warrior statue of Balhae at the National Museum of Korea.

Controversy boils over the ethnic makeup of the people of Balhae. That a former general from Goguryeo founded Balhae has been widely accepted, but disputes over his ethnicity arise over ambiguous wording in historical sources. Written records from Balhae have yet to be discovered.

Koreans, particular from the Joseon Dynasty onwards, regard Balhae as a Korean state. In the eighteenth century, during the Joseon Dynasty, Korean scholars displayed a renewed interest in Balhae. The Qing and Joseon dynasties had negotiated and demarcated the Sino-Korean border along the Yalu and Tumen rivers in 1712, and Jang Ji-yeon (1762–1836), journalist, writer of nationalist tracts, and organizer of nationalist societies, published numerous articles arguing that had the Joseon officials considered Balhae part of their territory, they would not be as eager to "give up" lands north of the rivers. Yu Deuk-gong in his eighteenth-century work Parhaego (An investigation of Balhae) argued that Balhae should be included as part of Korean history, and that doing so would justify territorial claims on Manchuria (Northeast China).

Korean historian Sin Chae-ho, writing about Jiandao in the early twentieth century, bemoaned that for centuries, Korean people in their “hearts and eyes considered only the land south of the Yalu as their home” and that “half of our ancestor Dangun ancient lands have been lost for over nine hundred years.” Sin also criticized Kim Busik, author of the Samguk Sagi (Chronicle of the Three Kingdoms), for excluding Balhae from his historical work written in the twelfth century, and claiming that Silla had achieved unification of Korea.[8] Inspired by ideas of Social Darwinism, Sin wrote:

Neither Silla nor the later Goryeo wrote an official history for Balhae, and some modern scholars argue that had they done so, Koreans might have had a stronger claim to Balhae's history and territory. [10]

North Korean and South Korean scholars regard Balhae as a Korean state, positioned in the "North South States Period" (with Silla) today, although such a view has had proponents in the past. They emphasize its connection with Goguryeo and minimize connection with the Mohe. While South Korean historians think ethnic Goguryeoians comprised the ruling class while mixed, including Mohe, comprised commoners, North Korean historians maintain that people from Goguryeo inhabited Balhae. Koreans believe the founder Dae Joyeong came from Goguryeo stock. The Book of Tang says that Dae Joyeong's comes from Goguryeo lineage " (고려별종, 高麗別種),[10] and the New Book of Tang states that he is "from the Sumo Mohe of the former realm of Goguryeo."

Western scholars characterize Balhae as a successor to Goguryeo that traded with China and Japan, and its name is romanized from Korean. [11] [12] [13] [14] Seen as composed of peoples of northern Manchuria (Northeast China) and northern Korea, with its founder and the ruling class consisting largely of the former aristocrats of Goguryeo. Korean scholars believe Balhae founder Dae Joyeong came from of Goguryeo lineage, while others believe him an ethnic Mohe from Goguryeo. [15] [16] [17] [18] 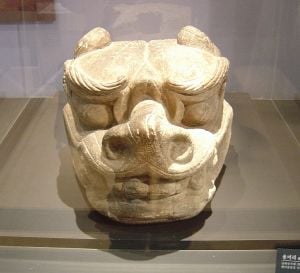 A dragon head artifact from Balhae at the National Museum of Korea.

Like many ancient Korean and Japanese kingdoms, Balhae sometimes paid tribute to China, and a heir who lacks that sanction China called 知國務 ("State Affairs Leader"), not king; also, China considered every king simultaneously the Prefect of Holhan/Huhan Prefecture (忽汗州都督府都督). Balhae rulers called themselves emperors and declared their own era names. Chinese historians consider Balhae composed of the Balhae ethnic group, mostly based on the Mohe. Historically, the Jurchens (later renamed the Manchus, considered themselves as sharing ancestry with the Mohe (Malgal). According to the Book of Jin (金史), the history of the Jurchen Jin Dynasty, both the Jurchen and Balhae people originally descended from the seven tribes of the Wuji. After defeating the Khitan Liao Dynasty, the Jurchens proclaimed "The Jurchens and Balhae are from the same family. (女直渤海本同一家) [11] The People's Republic of China continues to consider Balhae as part of the history of its ethnic Manchus. [19]

Korean scholars accuse The People's Republic of China of limiting Korean archaeologists access to historical sites located within Liaoning and Jilin. Starting from 1994, increasing numbers of South Korean tourists began to visit archaeological sites in China and often engaged in nationalistic acts. Aggravated by a series of tomb robberies and vandalism at several of those archaeological sites between 1995 and 2000, widely believed perpetrated by ethnic Koreans. [12]

South Korean archaeologist Song Ki-ho, a noted Seoul National University professor, who published several papers criticizing the Chinese government, made several visits to China in the 1990s, 2000, 2003, and 2004, to examine several historical sites and museums. The Chinese government restricted his note-taking and photography, even ejecting him from several sites. [20] [21] [22]

Russian archaeologists and scholars, like those from China, think of Balhae as an independent Mohe state, with Central Asian and Chinese influence. [14]

In relations with Japan, Balhae referred to itself as Goguryeo, and Japan welcomed that as a kind of restoration of its former friendly relationship with Goguryeo. [15] [16]

Retrieved from https://www.newworldencyclopedia.org/p/index.php?title=Balhae&oldid=1094785
Categories:
Hidden category:
This page was last edited on 11 January 2023, at 04:18.
Content is available under Creative Commons Attribution/Share-Alike License; additional terms may apply. See Terms of Use for details.