The Goguryeo-Sui Wars refer to a series of campaigns launched by the Sui Dynasty of China against the Goguryeo kingdom of Korea between 598 C.E. and 614 C.E. Goguryeo defeated of Sui, contributing to its eventual downfall of the dynasty in 618.

The might of Goguryeo displayed itself in the war with the Sui Dynasty. The Sui Dynasty had confidence to bring Goguryeo into the empire, just as they succeeded in unifying China by war. They believed that Goguryeo, extending into the northern reaches of China, geographically belonged to China. Armed with that confidence and conviction, the Sui launched four mighty invasion campaigns, all failing to conquer Sui. Remarkably, although Goguryeo defeated the Sui Dynasty, leading to the collapse of the empire, Goguryeo refrained from invading China to assume control of China. That could have happened, or at least the invasion could have been launched. Instead, Goguryeo fell to a combined Silla-Tang Dynasty attack in 668 C.E.

The Sui Dynasty united China in 589 C.E., defeating the Chen Dynasty and ending the division of the continent that spanned almost 300 years. After the unification of China, Sui asserted its position as the overlord of all of Asia, and most countries submitted themselves. Goguryeo, one of the Three Kingdoms of Korea, Pyeongwon and his successor Yeongyang insisted on maintaining an equal relationship with the Sui Dynasty.

Wendi of Sui took displeasure with the challenge from Goguryeo, which continued small scale raiding into Sui's northern border. Wendi sent diplomatic papers in 596 C.E. after Sui envoys spotted Goguryeo diplomats in the yurt of the Eastern Turk Khanate, demanding Goguryeo cancel any military alliance with the Turks, stop the annual raiding of Sui border regions, and acknowledge Sui as their overlord. Though Yeongyang appeared to comply with the ultimatum, in the following year, 597, he launched a joint preemptive invasion with the Malgal against Chinese outposts along the border in present-day Hebei province.

Wendi ordered his fifth and youngest son, Yang Liang (assisted by the co-prime minister Gao Jiong), and Admiral Zhou Luohou (周羅睺), to conquer Goguryeo with an army and navy totaling 300,000. Yang Liang's army faced the early rainy season when it reached Goguryeo. The unseasonably heavy rain made the army's progress almost impossible and hampered the transport of provisions. Constant attacks by Goguryeo forces and illness inflicted heavy casualties. Coming to the conclusion that the army could not achieve the objective on its own, Yang Yang decided to combine with Zhou's naval fleet and proceed.

Zhou's navy also came across their own challenges, contending with rough seas, losing many ships despite staying close to the coastline. Whenever they anchored, Goguryeo detachments attacked the Sui sailors. The fleet engaged in a battle against a Goguryeo fleet totaling 50,000 led by Admiral Gang I sik, presumably on the present Bohai Sea. Already weakened by ambushes and nature's onslaught, the Sui fleet suffered a devastating loss. Goguryeo annihilated the Sui forces, both at land and sea. Historical texts record that about 90 percent of the Sui troops perished. Korean historians calculate Goguryeo casualties as near none. Yang Yang retreated with the few forces remaining. That campaign constituted the only major defeat for Wendi, who died in 604, after being murdered by his son Yangdi.

Yangdi, when he won the throne in 604, built the Grand Canal connecting the north and south of China. The economic south and the political north connected by the canal, allowed transportation of troops during massive military campaigns . During the construction, millions of workers died, which had a somewhat adverse impact on support for the Sui regime.

After the construction of the canal, Yangdi ordered the enlisting of soldiers in 611. He instructed them to gather in present-day Beijing. The force gathered by year's end constituted one of the greatest in civilization according to the Book of Sui. Sui mobilized an estimated 1,138,000 combat troops. The support troops, responsible for logistics and transportation of resources, dwarfed even that number. Historians dispute the total strength of the army, with estimates ranging from three million to more than five million. The army began to depart in early 612, requiring forty days, due to its size, before the last unit set off. The long line of soldiers stretched for about 400 kilometers. 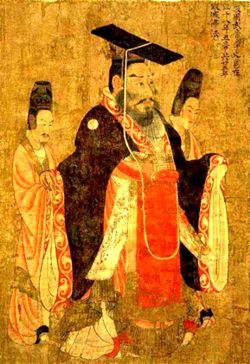 Yeongyang acted decisively. He gave up the buffer zone that he had acquired after the war of 598, as he thought that the area unsuitable to face such a vast army. The Goguryeo troops retreated behind the Liao River. Fortunately for the Koreans, the river melted much sooner than usual. By the time Yangdi arrived, the ice had all melted. Undaunted, Yangdi ordered the construction of three bridges across the river. The bridges proved too short to reach the opposite bank, and Goguryeo's ambush successfully held off the first assault. After the extension of the bridges, the Sui forces succeeded in crossing the river, the army surrounding the fortresses of Goguryeo.

Yangdi ordered his generals before the campaigns not to make individual decisions regarding the movement of troops, but to report to him to receive instruction. That order hampered Sui's strategy throughout the campaign. During the strategically important campaign against Yodong fortress, the general commanding the siege had to send a messenger to the emperor for the approval of the surrender. By the time the messenger returned, Goguryeo's troops strengthened to redefend the fortress. Exploiting that flaw in the Sui system, Yodong and other citadels of Goguryeo continued to hold on. By June, five months after the start of the campaign, not a single fortress had fallen to Sui. Yangdi pondered a fundamental change in strategy.

Yangdi developed a new strategy to keep the fortresses of Goguryeo in Manchuria at bay, while sending a contingent of army and navy to take Pyongyang,[1] Goguryeo's capital. He dispatched an army contingent, with a strength of 305,000, and a naval fleet of some 200,000.

The navy reached the bay of the Daedong River before the army. Seeing that the Sui army had not arrived yet, Yeongyang sent a small host to engage the Sui navy in battle. After a short engagement, feigning defeat, Goguryeo troops retreated into the city. The Sui naval commander, Lai Huni, considering that as a chance to add to his merit, led a host of some 100,000 to lay assault against Pyeongyang.[2]

When the Sui soldiers reached the outer citadel, they found the wall empty and the gate open. Upon entering the citadel, they found the valuables and weapons laid out in the open. Being cautious, he prohibited looting. While passing through a large Buddhist temple, Goguryeo troops ambushed Sui troops, failing to defeat them. The Goguryeo survivors retreated yet again. Lai, considering the ambush in the temple a decisive move of Goguryeo that failed, allowed the looting of the outer citadel. As the looting of the citadel peaked, a contingent of Goguryeo troops, consisting of thousands of troops, ambushed the Sui troops. Confused and disoriented, rather than offer resistance Lai fled to the fleet at the sea. His legion reduced to mere thousands. Disheartened by his failure, Lai changed his plan to wait for army contingent against Pyeongyang and combine to lay siege on the city.

The army contingent, led by generals Yu Zhongwen and Yuwen Shu, had their own problems. While he could safely transport supplies safely within China, once his transport caravans reached Goguryeo territory, Goguryeo forces waited ready to ambush. Yangdi solved the problem by instructing each soldiers to carry food for himself, which greatly increased each soldier's burden. Many resorted to discarding the food. By the time the provisions had reached Yalu River, the army suffered an acute shortage of provisions.

Yeongyang decided to assess the strength of the Sui army by ordering his Commander Field Marshal Eulji Mundeok to fake a surrender and peace negotiation terms with the Sui generals. Generals Wu had their own secret order from Yangdi to seize Yeongyang or Eulji if they should fall into their hands. The generals' advisers, notably the Assistant Director of the Right of the Department of State Affairs, Liu Shi Long (劉士龍), convinced them it would be unwise to arrest negotiators from the opposing camp. They ultimately let Eulji return to Goguryeo. Yu Zhongwen later regretted his decision, and attempted to lure Eulji back, sending a message that he wished to discuss things further. Eulji, aware of Wu's intentions, declined.

The two generals debated the next course of action, with Yu Zhongwen arguing strongly that Eulji should be pursued. In addition, Goguryeo capital should be captured. Accordingly, the Sui troops began advancing south towards Pyeongyang. Eulji maneuvered the Goguryeo troops so that they engaged the Sui army seven times a day, each time faking defeat and retreating. The strategy drew the Sui army deeper south with the perception of victory. The Sui army eventually advanced to about 20 km from Pyeongyang. Yu Zhongwen later recognized that his advancing troops suffered from exhaustion, and that fortifications of Pyeongyang made it too formidable to take.

Yu reached a dilemma, caught between a rock and a hard place, pondering whether to advance or retreat. Eulji sent him a poem, mocking Yu's ability as a commander. When no response came, Eulji sent a representative. He planned to offer to Yangdi an escort to Emperor Yeongyang to submit, if he withdrew the Sui army. Seizing that opportunity to retreat, Yu withdrew his troops towards Sui.

The Battle of Salsu River

When Sui army had reached Salsu (believed present-day Chongchon River), they found the water shallow. Eulji had already cut off the flow of water with a dam. When Sui army had half crossed the river, Eulji opened the dam, drowning many thousands of Sui soldiers. Goguryeo charged the remaining Sui army. The historical text records that Sui soldiers had to run almost 200 kilometers that day to escape death. The Battle of Salsu contributed to the massive overall casualty figure for Sui during the campaign. Emperor Yang crossed the Liao River to attack Goguryeo, initially, with 305,000 men only 2,700 returned.[3][4]

After crushing the revolt, Yangdi invaded Goguryeo a fourth time in 614 C.E. Though he managed to breach Goguryeo's first line of defense without capturing the frontier fortress, he halted just beyond the Liao River due to Goguryeo's constant ambushes and obstruction to his supply lines. Yeongyang, seeing a chance to end the exhausting wars, offered peace and returned Yang Xuangan's associate Husi Zheng (斛斯政), who had fled to Goguryeo after Yang Xuangan's rebellion, to Sui. Perceiving the little success in Goguryeo and the increasing internal discontent in China, Yangdi accepted Yeongyang's offer of peace and withdrew Sui troops from Goguryeo's territory.

Yangdi's continuous campaigns against Goguryeo resulted in the deaths of millions of people in Sui. The discontent against the regime rose, and after the last campaign, revolts erupted across China. Yangdi moved the capital to the south, but the revolts were too widespread.