According to Samguk Yusa and other records,[1] Dangun founded Gojoseon in 2333 B.C.E. Modern historians generally consider Gojoseon to have developed into a powerful federation or kingdom by around fourth century B.C.E. in the basins of the Liao and Taedong Rivers, ruling over northern Korean Peninsula and southern Manchuria. No archaeological records dating to the Dangun Joseon period (first of three Gojoseon periods) have been found to confirm the founding date or location of early Gojoseon.[2] Go-, sometimes translated as "Old" or "Ancient," distinguishes Gojoseon from the later Joseon Dynasty, also romanized as Chosŏn. See also: Names of Korea.

The people of Gojoseon propagated in Manchuria, far eastern China north of the Yangtze River, and the Korean Peninsula. Gojoseon eventually consolidated in lower Manchuria and the Korean Peninsula. Several Chinese texts record the people of Gojoseon as one of the Dongyi, meaning "eastern barbarians." Initially, probably located in Liaoning, around 400 B.C.E., Gojoseon moved its capital to Pyongyang, North Korea.[3][4]

The origin of Gojoseon hides shrouded in myth. Yet that myth, that Dangun had been born from a son of the "Lord of Heaven" and a bear turned woman, conveys a sense of divine origin. The actual history of Gojoseon's beginning has been difficult to investigate since the sites are within North Korea. Yet the fact that Gojoseon existed as a powerful, historical kingdom around 400 B.C.E. has been little disputed. Gojoseon has been recognized as the incubator for Goguryeo and Baekje, two extremely important kingdoms in the history of Korea. 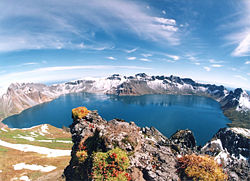 Legend present Dangun Wanggeom as the founder of Korea. The oldest existing record of that founding myth appears in the Samguk Yusa, a thirteenth-century collection of legends and stories. Jewang Ungi has a similar account

The Lord of Heaven Hwanin (환인; 桓因, a name which also appears in Indian Buddhist texts), had a son Hwanung who yearned to live on the earth among the people. Hwanin relented, and Hwanung descended to Mount Taebaek with 3,000 helpers, where he founded a city he named Sinsi (신시; 神市, "City of God" or "Holy City"). Along with his ministers of clouds, rain, and wind, he instituted laws and moral codes and taught the people various arts, medicine, and agriculture.

A tiger and a bear living in a cave prayed to Hwanung that they may become human. Upon hearing their prayers, Hwanung gave them 20 cloves of garlic and a bundle of mugwort, instructing them to eat only this sacred food and remain out of the sunlight for 100 days. The tiger shortly gave up and left the cave, but the bear remained and after 21 days was transformed into a woman.

Founding of the Nation

The Dongguk Tonggam (1485) description of the founding of Gojoseon has led some historians to set 2333 B.C.E. as the founding date. The date differs among historical sources, although all of them place the founding date during the mythical Yao's reign (traditional dates: 2357 B.C.E.-2256 B.C.E.).

Samguk Yusa sites Dangun's ascension to the throne in the 50th year of the legendary Yao's reign, Sejong Sillok the first year, and Dongguk Tonggam the 25th year. [5] Some historians have placed the founding of Gojoseon at around 3000 B.C.E. [6]

Contemporaneous historical records of early seventh century B.C.E. first mention Gojoseon as located around Bohai Bay and trading with Qi (齊) of China. At that time, the records identify Gojoseon as a distinct polity, but little archaeological evidence of a fully functioning state supports that.[7] Some historians argue that "Dangun" may have been the title of Gojoseon's early leaders. The legitimacy of the Dangun seems to have been derived from the divine lineage of Hwanin, a religious characteristic found in other ancient fortified city-states, such as those of Ancient Greece. Other states with defined political structures developed in the areas of the earlier bronze age "walled-town states" existed by the 4th century B.C.E., Gojoseon standing out as the most advanced of them in the peninsular region.[8]

The city-state expanded by incorporating other neighboring city-states by alliance or military conquest, forming a vast confederation of political entities between the Taedong and Liao rivers. The title and function of the leader of Gojoseon, designated as "king" (王 Wáng) in the tradition of the Zhou Dynasty around the same time as the Yan (燕) leader.[9] evolved. Records of that time mention the hostility between the feudal state in Northern China and the "confederated" kingdom of Gojoseon, and notably, a plan to attack the Yan beyond the Liao River frontier. The confrontation led to the decline and eventual downfall of Gojoseon, described in Yan records as "arrogant" and "cruel." But the ancient kingdom also appears as a prosperous bronze age civilization, with a complex social structure, including a class of horse-riding warriors who contributed to the development of Gojoseon, particularly the northern expansion into most of the Liaotung basin.

Around 300 B.C.E., Gojoseon lost significant western territory after a war with the Yan state, indicating Gojoseon had already grown into a kingdom large enough to wage war against Yan and survive the loss of 2000 li (800 kilometers) of territory.[10] Some historians believe that Gojoseon relocated its capital to the Pyongyang region around that time.[11]

According to some Chinese records, Chinese descendants led by Gija founded the kingdom Gija Joseon. Controversy has flared up around the claim that Gija Joseon existed. Many Korean scholars deny its existence, [12] pointing several documents. Chu-shu chi-nien (竹書紀年) and Confucian Analects (論語), which number among the first works to mention Gija, lack mention of his migration to Gojoseon. [13]. Detractors of the Gija Joseon theory point out that the cultural artifacts found in the region appear to have non-Chinese origins. They point to a Gojoseon mandolin-shaped bronze dagger as an example, possessing a shape and bronze composition different from similar artifacts found in China. Another school of historians argues that Gija Joseon coexisted with Gojoseon of Dangun, occupying territory to the west Gojoseon, around Hebei, Liaoning and southern east of Inner Mongolia, an area later overthrown by Wiman.

Several views on the course of the decline and Gojoseon's fall have emerged based on differing views of the migration of Gija Joseon. One account relays that King Jun appointed refugees from China, Wiman. Wiman later rebelled in 194 B.C.E., and Jun fled to southern Korean Peninsula. The Chinese influenced Wiman Joseon but never possessed the kingdom as a fiefdom. In 109 B.C.E., Wudi of China invaded near the Liao River. Gojoseon fell after over a year of war in 108 B.C.E., China establishing Four Commanderies of Han in western part of Gojoseon. Gradually losing control of former fiefs, Gojoseon disintegrated by 1st century B.C.E. As Gojoseon lost the control to their confederacies, many smaller states sprang from the former territory of Gojoseon, such as Buyeo, Okjeo, Dongye, Guda-guk, Galsa-guk, Gaema-guk, and Hangin-guk. Goguryeo and Baekje evolved from Buyeo.

Archaeologists discovered a new pottery culture of painted and chiseled design from around 2000 B.C.E. Those people practiced agriculture in a settled communal life, probably organized into familial clans. Archaeologists have found rectangular huts and increasingly larger dolmen burial sites throughout the peninsula. Bronze daggers and mirrors have been excavated while discovering archaeological evidence of small walled-town states in this period.[15]

Mumun pottery. In the Mumun Pottery Period (1500 - 300 B.C.E.), plain coarse pottery replaced earlier comb-pattern wares, possibly as a result of the influence of new populations migrating to Korea from Manchuria and Siberia. That type of pottery typically has thicker walls and displays a wider variety of shapes, indicating improvements in kiln technology.[16] Although that period sometimes has been called the Korean bronze age, the discovery of bronze artifacts has been rarely and regionalized until the seventh century B.C.E.

Rice cultivation. Sometime around 1200 to 900 B.C.E., rice cultivation from China, by way of Manchuria, found its way into Korea. The people also farmed native grains including millet and barley, and domesticated livestock.[17]

The Bronze Age began on the peninsula , according to most historians, around 1000 B.C.E., but estimates range from the fifteenth to eighth centuries B.C.E. Although the Korean bronze age culture derives from the Liaoning and Manchuria, it exhibits unique typology and styles, especially in ritual objects. By the seventh century B.C.E., a Bronze Age material culture, with influences from northeastern China as well as from Siberia and Scythian bronze styles, flourishes on the peninsula. Korean bronzes contain a higher percentage of zinc than those of the neighboring bronze cultures. Bronze artifacts, found most frequently in burial sites, consist mainly of swords, spears, daggers, small bells, and mirrors decorated with geometric patterns. [18][19]

Gojoseon's development seems linked to the adoption of bronze technology, most notably expressed in the idiosyncratic type of bronze swords, or mandolin-shaped daggers (비파형동검, 琵琶形銅劍). The mandolin-shape dagger, found in the regions of Liaoning, Manchuria down to the Korean peninsula, suggests the existence of Gojoseon dominions, at least in the area shown on the map. Remarkably, the shape of the "mandolin" dagger of Gojoseon differs significantly from the sword artifacts found in China. In addition, the composition of Gojoseon's bronze artifacts contains much more tin than that of China, which emphasizes the differences between Gojoseon's bronze culture and Chinese bronze ware, and the originality of Gojoseon's technological development.

Around 900 B.C.E., burial practices become more elaborate, a reflection of increasing social stratification. Goindol, the Dolmen tombs in Korea and Manchuria, formed of upright stones supporting a horizontal slab, have been found in greater numbers in Korea than in other parts of East Asia. Stone cists (underground burial chambers lined with stone) and earthenware jar coffins manifest other new forms of burial. Dolmens and stone cists yielded bronze objects, pottery, and jade ornaments indicating they had been reserved for the elite class. [12] [13] Around the 6th century B.C.E., burnished red wares, made of a fine iron-rich clay and characterized by a smooth, lustrous surface, appear in dolmen tombs, as well as in domestic bowls and cups. [14]

Jin-guk, the apparent predecessor to the Samhan confederacies, occupied the southern part of the Korean peninsula around this time. Iron technology came to Korea by way of China around 300 B.C.E. Jin produced iron locally in the southern part of the peninsula by the second century B.C.E. According to Chinese accounts, Japan and the rest of the Korean Peninsula valued iron from the lower Nakdong River valley in the southeast. [15]

Numerous small states and confederations arose from the remnants of Gojoseon, including Goguryeo, Buyeo, Jeon-Joseon, Okjeo, and Dongye. Three of the Chinese commanderies fell to local resistance within a few decades, but the last, Lelang, remained an important commercial and cultural outpost until destruction by expanding Goguryeo in 313.

King Jun of Gojoseon apparently fled to the state of Jin in southern Korean peninsula. Jin developed into the Samhan confederacies, the beginnings of Baekje and Silla, continuing to absorb migration from the north. Goguryeo, Baekje, and Silla gradually grew into the Three Kingdoms of Korea that dominated the entire peninsula by around the 4th century.

Retrieved from https://www.newworldencyclopedia.org/p/index.php?title=Gojoseon&oldid=1091954
Categories:
Hidden category:
This page was last edited on 19 December 2022, at 09:14.
Content is available under Creative Commons Attribution/Share-Alike License; additional terms may apply. See Terms of Use for details.