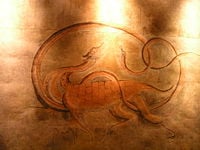 Hyeonmoo, Guardian of the North. Paiting on ancient Korean tomb.

Shinshi, a semi-legendary ancient city that, according to the history books such as Samguk Yusa, Gyuwon Sahwa, Shindan Minsa, and Hwandan-gogi, Shinshi or Baedal (Hangul : 배달국 Hanja/Hanzi:倍達國) Hwanung or Dangun established as the firstKorean nation. Shinshi (신시, 神市) literally means "the city of god(s)/spirit(s)" where people live together in a protected area or "the fair/market of god(s)/spirit(s)" where people come together and exchange their goods.

Shinshi (or Sinsi) holds a special place in the minds of Koreans North and South. South Korea tends to emphasize the founding of Korea with the unification of the Three Kingdoms, which included the southern areas of Goguryeo in the north. Still, South Koreans normally grant that Korea's mythical beginnings lay with Hwanung or Dangun founding the mythical city of Sinsi around the year 2333 B.C.E. China rejects the claim that Korea began with Sinsi and Gojoseon since the place of that founding lay deep within China's sovereign terrority today.

Records describe the founding of Shinshi State in somewhat different ways. Hwandan-Gogi records that Shinshi state had been founded at the area of Baekdu Mountain and Amur River to provide maximum protection and benefit to the people with the capital city named Shinshi. The legend states that Hwanin (환인,桓因) gave three presents of Cheon Boo and Ihn to Hwanung (환웅,桓雄), and 3,000 people had descended from heaven with Hwanwoong to the area of birch trees—Gyuwon Sahwa records Hwanung Shinshi as the same person. Shinshi state's, also known as Guri, borders reached the Shandong Peninsula in modern-day China. Emperor Chi-Woo the Great of Baedalguk, the greatest and most renowned of the Shishi state's Emperors has been described as a brilliant military leader and strategist. During the time of Emperor Chi-Woo the empire reached its greatest extent. The Shinshi state most likely disintegrated due to internal struggles, and probably fell to neighboring nations.

Three imperial families, Sinsi, Gosi, and Chiwoo, ruled in Shinshi state. The three families ruled as royal families and emperor in the Shinshi state alternatively. The descendants of those three families divided into nine tirbes, the so-called Kuhwan (Gu means nine in Korean). Kuhwan means the nine tribes from Hwanguk, a legendary nation of Korea. The word of Kuhwan sometimes transliterates into other words such as Kuryeo(구려,九黎), Kuyi(구이,九夷), and Koryeo (고려,高黎 or 高麗). Korea derives from Kuryeo and Koryeo.

Some scholars believe that Gojoseon succeeded the Shinshi state. As mentioned earlier, Shinshi also went by the name Guri, and the word "Goguryeo" can be broken down into Go-Guri, meaning Go (high), Guri. Thus, Goguryoe means "the Higher Guri nation." In addition, Goguryeo also interprets as the nation of Guri or Goryeo governed by the family of "Go" since the family name "Go" makes up Goguryeo. Indeed, the Samguk Sagi states that Goguryoe recovered most of the lost territories previously lost.

Fall of the empire

As with all empires in history, the Shinshi state fell. The steady decay of the ancient empire began after its golden age under its fourteenth ruler, Emperor Chi-Woo the Great of Baedalguk. Korean historians lack records on the causes of the fall of the empire, but many have inferred that corruption and border conflicts with neighboring barbaric tribes caused the fall. Emperor Geobuldan, the eighteenth and final ruler of the Shinshi state, ruled for a mere 48 years while a majority of his predecessors had been recorded to have ruled for over 50 years. Historians have also inferred that the last emperor of Shinshi state sat as a weak puppet monarch, much like other final rulers of other dynasties. Shinshi state followed the same cycle of rise, height and fall as Unified Silla, Goguryeo, Goryeo, and Joseon. Emperor Chook Da-Li of Baedalguk, the sixteenth ruler of Shinshi state reigned as the last emperor to rule over during Shinshi states golden age.

Description about Shinshi in Historical Records 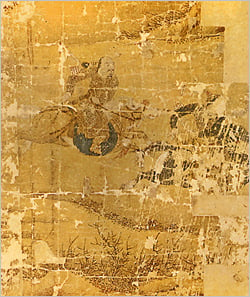 "Hunt in the Heavenly Mountains"

Hwanung with a group of 3,000 people came down to the shindansu (a kind of sacred tree) and Hwanung taught the people how to live as a human. Hwanung named the place shinshi.

Shinshi or Hwanung ruled a nation succeeded by Gojoseon. He made the manners and cultures of marriage, In addition, he ordered the people to engage in farming and exchange their necessities. Chiwoo, Goshi and Shinshi became the rulers of the nation in turn. The nation continued about 11,000 years, and then Dangun founded Gojoseon which is the first state of Korean.

After Dangun established Gojoseon, the six tribes opened the Shinshi, a kind of feast in which they saluted the sky and sang together in the forest every ten years. They opened the choshi (朝市), the market for visiting and the haeshi (海市), the market facing the sea.

There is a list of Shinshi in Hwandan Gogi, as follows.

Retrieved from https://www.newworldencyclopedia.org/p/index.php?title=Sinsi&oldid=1081639
Categories:
Hidden category:
This page was last edited on 9 October 2022, at 08:57.
Content is available under Creative Commons Attribution/Share-Alike License; additional terms may apply. See Terms of Use for details.