For other uses, see Dangun (disambiguation).

Korean mythology represents Dangun Wanggeom as the founder of Gojoseon, the first kingdom of Korea, in present-day Liaoning, Manchuria in the northern part of the Korean Peninsula. Myth represents him as the grandson of the god of heaven who founded the kingdom in 2333 B.C.E. Some scholars maintain that the term Dangun also refers to a title used by all rulers of Gojoseon, and that Wanggeom is the proper name of the founder.

Although myth shrouds the origins of the Korean people, the message in the myth is that Koreans believe they have descended from the Lord of Heaven directly. 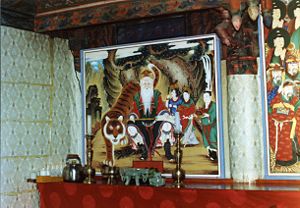 Dangun's ancestry begins with his grandfather Hwanin (환인; 桓因), Divine Regent or the "Lord of Heaven," a name which also appears in Indian Buddhist texts. According to the budoji (1953), Hwanin is the grandson of Hwang-gung 황궁(黃穹), one of the Four Men of Heaven and considered a direct ancestor of the Korean people. In the later Dangun mythology, he is portrayed as the Emperor of Heaven himself.

Hwanin 환인(桓因) is an alias in Buddhism for the name Indra,[1]Hwanin 환인(桓因) a name widely used in East Asia. Hwanin is a pronunciation of the Chinese letters "환인 桓因," which is merely ancient Korean oral language written with Chinese written language letters with similar sounds.

Hanul-nim. 하늘님 Hanul-nim indigenous Korean for "Sky Highness" (the suffix "님 -nim" is addressed towards a person of higher rank, much like "-sama" in Japanese). "하늘님 Hanul-nim" changed orally into "하느님 Haneuh-nim," and finally, ancient scholars rewrote this according with similar sounding Chinese Letters: 桓因. Modern Korean pronounciation for those Chinese characters is "환인(Hwanin)." But the majority of the Koreans today, not knowing that, recognize 환인 (Hwanin) as a name for a person rather than the form of a heavenly title referring to a heavenly deity. 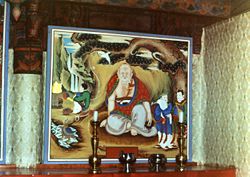 Hwanin had a son Hwanung (환웅(桓雄)) who yearned to live on the earth among the valleys and the mountains. Hwanin permitted Hwanung and 3,000 followers to descend onto Baekdu Mountain, then called Taebaek Mountain (태백산; 太伯山), where Hwanung founded Sinsi (신시; 神市, "City of God"). With the help of his ministers of clouds, rain, and wind, he instituted laws and moral codes and taught humans various arts, medicine, and agriculture.

Tiger and a Bear. A tiger and a bear prayed to Hwanung that they may become human. Upon hearing their prayers, Hwanung gave them 20 cloves of garlic and a bundle of mugwort, ordering them to eat only this sacred food and remain out of the sunlight for 100 days. The tiger gave up after about twenty days and left the cave. The bear remained, transforming into a woman.

Dangun ascended to the throne, built the walled city of Pyongyang (present capital of North Korea), and called the kingdom Joseon. He then moved his capital to Asadal on Mount Baegak (or Mount Gunghol). Fifteen-hundred years later, in the year Kimyo, King Wu of the Zhou Dynasty enfeoffed Jizi to Joseon, and Dangun moved his capital to Jangdangyeong. Finally, he returned to Asadal and became a mountain god at the age of 1,908. 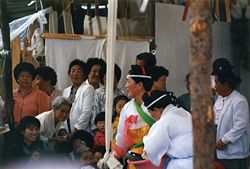 Tradition, based on the description of the Dongguk Tonggam (1485) as the fiftieth year of the reign of the legendary Chinese Emperor Yao, calculates the beginning of Dangun's rule at 2333 B.C.E. Other sources vary somewhat, but also put his ruling beginning during Yao's reign (traditional dates: 2357 B.C.E.-2256 B.C.E.). Samguk Yusa states Dangun ascended to the throne in the fiftieth year of Yao's reign, while Sejong Sillok says the first year and Dongguk Tonggam states the twenty-fifth year.

Until 1961, the South Korean government calculated years from the legendary birth of Dangun, called that the Dangun era or Danji (단기; 檀紀), beginning in 2333 B.C.E.. October 3 in the Korean calendar is known as Gaecheonjeol (개천절; 開天節, or the "Festival of the Opening of Heaven." That day is a national holiday in the Gregorian calendar, called National Foundation Day, or Dangun day. For that reason, Koreans typically declare that Korea has a 5,000 year history.

The earliest recorded version of the Dangun legend appears in the thirteenth century Samguk Yusa, which cites China's Book of Wei and Korea's lost history text Gogi (古記). That is the best known and most studied version, but similar versions exist in the Jewang Un-gi by the late Goryeo scholar Yi Seunghyu 李承休 (1224­-1300), as well as the Eungje Siju and Sejong Sillok of the early Joseon dynasty.

Cultural Anthropologists regard the legend of Dangun to reflect the sun-worship and totemism common in the origin myths of Northeast Asia. Origin myths of Manchuria and Russian Far East often feature a bear. The legend therefore may hint at the relationships among various tribes that worshipped the sun, bear, and tiger. The story further illustrates the importance of knowledge of weather to the early agricultural peoples of Korea.

Mausoleum of Dangun. In the 1990s, North Korea claimed to have found and excavated parts of the Mausoleum of Dangun. Scholars outside of North Korea generally express skepticism of the dating methods and the excavation proceedures since the North Korean government refused to allow independent archeologist from the international community access for examination and testing. 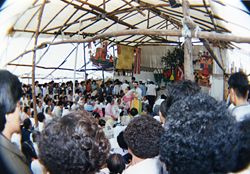 Extensively restored in 1994, the Mausoleum occupies about 1.8 km² (.70 mi²) on the slope of Taebak Mountain (대박산). The complex divides into three major sections: restoration work area, stone statue area, and the burial site. Shaped like a pyramid, Dangun's grave stands about 22 m (72 ft) high and extends 50 m (164 ft) in length on each side. Legend dated the founding of Gojoseon to 2333 B.C.E. Current excavations, however, have dramatically revised the estimates of North Korean historians to at least 3000 B.C.E., making the site c. 5,011 years old (±267 years in 1993).

Controversy. A nail found in the mausoleum, dating to the Goguryeo period (37 B.C.E.-668 B.C.E.), has been the subject of much controversy. That discovery has led some North Korean historians to conclude that the mausoleum had been discovered and renovated during the Goguryeo period. Many observers and historians outside of North Korea, including South Korea, consider the data and the interpretation compromised by politics and nationalism. As mentioned above, North Korea has permitted no independent testing to resolve the questions over authenticity and dating.

During the Mongol invasions of Korea, the Dangun legend played an important role in national unity and patriotic mobilization against the invaders. Gosindo (고신도; 古神道), a version of Korean shamanism that considered Dangun a god, had a small following, but had largely died out by the fifteenth century.

In the late nineteenth and early twentieth centuries, with a resurgence in Korean nationalism after repeated Japanese invasions and the beginning of Japanese rule (1910-1945), the movement revived in ''Daejonggyo'' (대종교; 大宗敎). Na Cheol (1864-1916) promoted Daejonggyo, but subsided under the suppression of the Japanese occupation forces, since it conflicted with the Japanese cultural assimilation policy. After the surrender of Japan and the liberation of Korea, Daejonggyo revived, although remaining a minor religion.

Taekwondo, a form of the Korean martial art presents Dangun as the second pattern, or tul. Students learn that the tul represents "The holy legendary founder of Korea in the year 2333 B.C.E." Uncharacteristic for a tul, all the punches in Dangun aim for the high section (at eye level), symbolising Dangun scaling a mountain (Dan-Gun Hyung).

Retrieved from https://www.newworldencyclopedia.org/p/index.php?title=Dangun&oldid=1071173
Categories:
Hidden category:
This page was last edited on 24 June 2022, at 00:20.
Content is available under Creative Commons Attribution/Share-Alike License; additional terms may apply. See Terms of Use for details.