Jizi (chinese:箕 子) (Gija in Korean)[1], was a semi-legendary Chinese sage who is said to have ruled Joseon in the twelfth century B.C.E. He had Zi (子) as his family name and Xuyu (胥餘/서여 xūyú/seoyeo, or 須臾/수유 xūyú/suyu) as his given name.

The legend of Gija has left clearer historical tracks than the myth of Dangun, but the myths of both of these play a key role in modern Korea's explanation of the origin of its people and nation. Korea has developed the historical accounts to view Gija as building on the foundation of Dangun. In that way, the wisdom of the pre-Confucius era in China embodied in Gija blended with the Shamanistic beliefs embodied in Dangun. Both Gija and Dangun have been developed into key persons in Korean history who brought civilization to northern Korea.

The typical narrative of the legend of Jizi follows:

Jizi had been a relative of the last king of the Shang Dynasty, King Zhou, who was known as one of the three wise men of Shang, along with Weizi and Bigan. The corrupt King Zhou imprisoned Jizi because he demonstrated against misrule (one variant states that after King Zhou killed Bigan he imprisoned Jizi because Jizi pretended madness). After the Zhou Dynasty overthrew the Shang Dynasty, King Wu released Jizi, who gave him advice on politics when the king visited. King Wu enfeoffed (deeded land in exchange for a pledge of service) to Jizi on Joseon, identified as northwestern Korea today. Jizi taught the people rites, agriculture, sericulture and weaving.

Evolution of the legend of Jizi 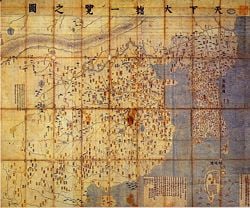 As time has passed, legends about Jizi have become more and more numerous, leading many scholars to conclude the Gija legend had no basis in history. Dating classical Chinese text has been difficult, but pre-Qin Dynasty documents including the Analects of Confucius, the Shangshu and the Bamboo Annals do describe Gija simply as a virtuous man from the Shang (ca. 1766 B.C.E. - ca. 1050 B.C.E.) royal family. In these texts he is not associated with Joseon, and also these texts make no mention of Jizi's descendants.

Jizi is associated with Joseon in later documents. The Shangshu dazhuan (zh:尚书大传) (second century B.C.E.?) constitutes the earliest known source stating that Jizi went to Joseon. In this account, King Wu of Zhou recognized Jizi as the ruler of Joseon. The Records of the Grand Historian (Shiji) by Sima Qian records a similar but more detailed story, but unlike the Shangshu dazhuan, it states that Jizi did not became a subject of King Wu although enfeoffed by him. In the Shiji, the story appears in the section on the Song ruling family (宋微子世家), in which he founder Weizi comes from the former Shang. The story of Jizi is omitted from the section dealing with contemporary Joseon (i.e., northwestern Korea), where Wiman's kingdom had flourished until falling to the Han Dynasty. Thus Joseon referred to in those sources remains hazy. Among Han-Dynasty sources, the Hanshi waizhuan mentions Jizi without mentioning Jizi's migration to Joseon.

The Hanshu (first century C.E.) makes no mention of Jizi in the section on Joseon, but describes Jizi's educational activity in Joseon in the section of Dilizhi (地理志): He taught the people of Joseon rites, agriculture, sericulture, and weaving. In addition, a sentence in the Hanshu has been interpreted as Jizi's introduction of the law of "Eight Prohibitions" in Joseon. The Weilüe, complied during the Kingdom of Wei (220-265) or later, inserts a record about Jizi's descendants and connects Jizi to Wiman's kingdom in northwestern Korea: Jizi's descendants remained in Joseon and claimed themselves as king after the Zhou Dynasty declined. The Weilüe characterizes the last king Zhun (準), as a Yan Chinese fleeing to Joseon after expulsion in 192 B.C.E. by Wiman. Zhun fled to the south and proclaimed himself the King of Han (韓).

According to a commentary to the Shiji, Du Yu in the first half of the third century located the tomb of Jizi in Meng Prefecture of the State of Liang. That suggests that the story of Jizi's association with Joseon had been weak although the narrative seen in the Hanshu later became common. According to the Old Book of Tang, the people of Goguryeo, who had already conquered the former Chinese commanderies, worshipped Jizi as one of the major deities.

According to most scholars, early Chinese history books reflect historical facts at least from the late Shang Dynasty onward, leading to the conclusion that the Jizi described in pre-Qing sources existed as a historical character. Archaeological evidence suggests that Jihou (㠱侯) or Lord Ji under the Yan Kingdom ruled a small city state in Liaoning. Jihou may have served as the model of Jizi. As for post-Qing sources, the story in the Weilüe remains controversial due to information contained that is missing in later texts. Imanishi Ryū presumed that that story had spread to China because of Chinese direct rule of the Korean Peninsula and that the source of information would have been the influential Chinese Han clan of the Lelang Commandery, who might have claimed themselves as descendants of Jizi.

Spread of Gija's legend in Korea 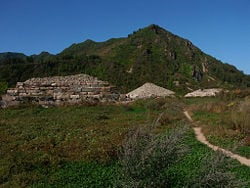 The Koreans, especially Confucians, considered Jizi a Chinese sage who had brought Chinese civilization to Korea. During the Goryeo Dynasty, King Sukjong identified a mound near P'yŏngyang as Jizi's tomb. He built a mausoleum to enshrine him in 1102 C.E.. The throne rebuilt the mausoleum in 1324 and repaired it again in 1355. In the Samguk Yusa (1281?) and the Jewang Ungi (1287), the story of Jizi follows that of the Weilüe, but unlike Chinese sources, these sources add that Jizi succeeded Dangun, who had ruled Gojoseon. Most subsequent Korean history books follow that narrative. This is the correlation by which the Koreans can claim an association with both shamanism (from Dangun) and pre-Confucian China (from Jizi).

During the Neo-Confucian Joseon Dynasty (1392-1910), state worship of Jizi intensified. The name "Joseon," given by Ming, derived from Jizi's dukedom. During the reign of King Taejong the ritual rites of Jizi performed in P'yŏngyang were refined. In 1429, King Sejong separated Dangun from the mausoleum of Jizi. King Sejong also put up a monument in honor of Jizi. In the same period, agricultural fields allegedly developed by Jizi became P'yŏngyang. Those fields came to prominence among Ming Chinese. In 1570, King Seonjo erected a monument instructing people to alight from horses out of respect for Jizi.

A number of published books on Jizi include the Gijaji (箕子志) of 1580, a collection of available materials on him, and the Gija Silgi (箕子實記) by Yi I. Around the same time, many Korean clans associated their origins with Jizi. Among them, the Cheongju Han clan (淸州韓氏), the Deokyang Gi clan (德陽奇氏) and the Taewon Seonu clan (太原鮮于氏) claimed that they originated in Jizi.

At first, the Korean Empire placed equal importance on Dangun and Jizi (or weighted toward Jizi) in order to portray Korea as an independent kingdom instead of a vassal state of China. Emperor Gojong and his court stressed that King Wu of Zhou had never treated Jizi as a subject. Focus later shifted to Dangun. According to Choe Namseon, the word "Jizi" constituted a distortion of Korean "gaeaji," meaning "son of the sun" used as the title for a monarch who succeeded Dangun. [2] Similarly, Yi Byeongdo claimed the Korean Han clan, who later falsely claimed descent from Jizi, the ruling family of Gija Joseon [3]

Some scholars speculate that Jizi had been enfeoffed somewhere in China rather than settling in Korea. Candidates for the place of his enfeoffment include Meng Prefecture (modern-day Henan, China), based on Du Yu's above-mentioned statement, and Taigu, Shanxi, China, based on the Spring and Autumn Annals, the official chronicle of the State of Lu covering the period from 722 B.C.E. to 481 B.C.E.. Cheon Gwanu claimed that the Korean Gi tribe, led by Jizi, established Gija Joseon in Hebei and later migrated to P'yŏngyang.

In South Korea, the high school national history textbook describes Gija Joseon marginally in a note, as a Korean tribe. Although it was widely accepted during Goryeo and Joseon periods that Jizi migrated to Korea to establish Gija Joseon, Jizi's purported migration to Korea has been widely rejected today due to contradicting historical and archaeological evidence.[4] In North Korea, according to Chinese scholar Zong Yan, the mausoleum of Jizi in P'yŏngyang has been removed.[5]

Retrieved from https://www.newworldencyclopedia.org/p/index.php?title=Gija&oldid=1091211
Categories:
This page was last edited on 11 December 2022, at 06:49.
Content is available under Creative Commons Attribution/Share-Alike License; additional terms may apply. See Terms of Use for details.