In 1897, King Gojong returned to Gyeongun Palace from his refuge at the Russian consulate, proclaiming the Korean Empire. Faced with increasing pressure from Japan on Korea's sovereignty in the aftermath of the Japanese assassination of Queen Min, Gojong hoped to hold off encroachments by declaring Korea a free and independent Empire. The Korean Empire lasted a short time, from the Gwangmu Restoration of 1897 until Japan's annexation of Korea in 1910.

The Korean Empire replaced the Joseon Dynasty which had ruled Korea for 500 years. Some have advanced that the declaration of Korea as an empire denoted the revival of the Samhan confederacies of the Proto-Three Kingdoms of Korea, advancing that the new title for Korea stood in the tradition of naming new states after historic states (Gubon Sincham, 舊本新參, 구본신참). In any case, Gojong hoped that the declaration of Korea as an Empire would free Korea from the entanglement with China, Japan, and Russia, enabling Korea to navigate the perilous course through modernization and independence. That hope proved futile with Japan's defeat of China in the Sino-Japanese War of 1895, Japan's defeat of Russia in the Russo-Japanese War of 1905, and the annexation of Korea in 1910.

In 1894, the Empire of Japan emerged victorious in the First Sino-Japanese War against the Qing Dynasty of China, transforming Japan overnight into an international powerhouse in the Far East. With its newfound preeminence over waning China, Japanese delegates negotiated the Treaty of Shimonoseki with the Qing emissaries, enabling Japan to wrestle control over the Liaodong Peninsula from China (a move designed to prevent the southern expansion of Japan new rival in Russia), and, more importantly to Korea, scrapped the centuries-old tributary relationship between Joseon and the mainland. Russia, recognizing that agreement as an act against its interests in northeastern China, brought France and Germany to its side supporting the repatriation of the Liaodong Peninsula to China.

Japan, facing a formidable western alliance, needed to build military forces and plan a strategy for seizing control of Korea and China as the first stepping stone toward establishing the East Asian Co-prosperity Sphere, another name for the Japanese empire in the Pacific. With the success of the three-country intervention, Russia emerged as Japan's key rival for power in East Asia, replacing the Qing Dynasty as the country that the many government officials in the Joseon court advocated close ties with to prevent more Japanese meddling in Korean politics.

Queen Min (the later Empress Myeongseong), the consort of King Gojong, recognized the power shift from China to Russia, formally establishing closer diplomatic relations with Russia to counter Japan. Queen Min began to emerge as a key figure in higher-level Korean resistance to Japanese influence. Japan, seeing its designs endangered by the queen, quickly replaced its ambassador to Korea, Inoue Kaoru, with Miura Goro, a diplomat with a background in the Japanese military. He orchestrated the assassination of Queen Min on October 8, 1895 at her residence at Gyeongbok Palace, nearby the Geoncheon Palace, the official sleeping quarters of the king within Gyeongbok Palace. 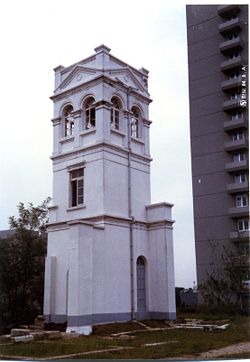 Remains of the Russian Embassy

Japan next planned to seize control of King Gojong, taking the royal seal from him and issuing edits from the royal palace. To thwart that plan, Gojong escaped confinement in the palace under Japanese guards by dressing as a court lady, proceeding to the Russian Embassy for sanctuary which Russia provided. Russia had plans for Korea, too, as played out 50 years later with the seizure of North Korea in the aftermath of World War II. But Gojong saw Russia as a less immediate threat to Korean sovereignty than Japan. The United States, England, France, and Germany stood on the side lines as disinterested spectators, although missionaries in Korea sought to bring their nations into play to protect Korean sovereignty, most notably protestant missionaries from the United States. Gojong remained in the Russian Embassy for nearly one year, from 1896 to 1897.

Russia, confident of the military might projected through a powerful navy, came into Japan's sights next. Japan worked hard to modernize Japanese government and military along Western lines since the beginning of the Meiji Restoration in 1868, quietly moved into position to fight and defeat Russia for supremacy in the East Asian political arena.

During the time from Queen Min's death to the king's return from Russian protection, Korea underwent another major upheaval both at home and abroad. In 1895, new laws passed by pro-Japanese progressives in the royal cabinet forced through long-desired reforms, the Kabo Reforms, aimed at modernizing Korean society along Japanese and Western lines. Their policies resulted in the official discarding of the lunar calendar in favor of the modern Gregorian solar calendar, the cutting of traditional male Korean top knots, the official designation of era names independent of the Chinese tradition, and the creation of a postal service. In 1896, with the sudden absence of Gojong, Russia quickly took the opportunity to actively interfere in domestic Korean politics, leading to the contraction of the pro-Japanese faction's influence. Those years also marked the beginning of the economic exploitation of Korean natural resources by mining and timber corporations from Russia, the United States, and Japan. 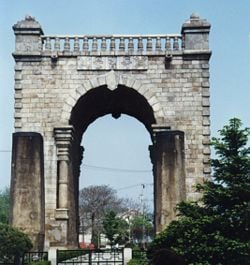 Meanwhile, the new reforms aimed at modernizing Korean society soon stirred up controversy within Korea. Anti-Japanese sentiment had entrenched in the minds of commoners and aristocrats alike since the sixteenth–century Japanese invasion of Korea. That sentiment had become pervasive in the royal court and upper echelons of society following the Gangwha Treaty of 1876. Most Koreans expressed violent passions against rising Japanese influence with Japan's meddling in court politics and the assassination of Empress Myeongseong. The new and modern reforms pushed forward by the pro-Japanese progressives, the most controversially the mandatory cutting of male topknots (a tradition in Korea and formerly Japan to not cut one's hair for life, mostly out of respect for Confucian ideals), ignited further resentment and discontent. That led to the uprising of the Eulmi temporary armies aimed at avenging the assassination of Empress Myeongseong.

In 1896, Seo Jae-pil, a naturalized citizen of the United States and the man behind the Dongnip Sinmun (독립 신문), or the Independent Newspaper, formed the so-called Independence Club (독립 협회) in cooperation with progressives who desired autonomy from Japan. The Independence Association, once limited as an organized movement led by and included only government officials, soon expanded to include civilians from all classes. The Independence Association stressed the need for a reform-oriented government policy that would eventually lead to full independence. The association also regularly held conferences to strengthen national morale and collected money to continue the issuance of regular editions of the Independent Newspaper, and, more significantly, demolish the Yeongeunmun that had received Chinese envoys from the west of the Yellow Sea to construct the Dongnimmun, or Independence Gate, at that very site.

Early versions of the Korean flag

In 1897, King Gojong, yielding to rising pressure from both overseas and the demands of the Independence Association-led public opinion, returned to Gyeonungung (modern-day Deoksugung). There, he proclaimed the founding of the Empire of Korea, officially redesignated the national title as such, and declared the new era name Gwangmu (Hangul: 광무, Hanja: 光武). That effectively severed Korea's historic ties to the Qing Chinese established since the fall of the Ming Dynasty, turning King Gojong into the Gwangmu Emperor, the first imperial head of state and hereditary sovereign of the Empire of Korea. That marked a clear break from the traditional Chinese tributary system in the Far East, as an empire necessary stood independent from Qing dynasty China. In addition, Korea's declaration as Empire implemented the "full and complete" independence of Korea as recognized in 1895.

The Sino-Japanese War had marked the rapid decline of the Joseon Dynasty, already reeling from internal divisions between Progressives and Conservatives within the Korean government. Near the natural end of the longest dynasty in Korean history, the Joseon dynasty stood ripe for collapse and rebirth into a new dynasty; Gojong had hoped that declaring Korea the "Korean Empire" would signify the death of the decaying inept Joseon Dynasty and the birth of a powerful, independent new dynasty.

The Korean Empire, defended by a weak and unmodernized military, proved helpless in fending off the Japanese. Japan forced the Gwangmu Emperor to abdicate in 1907 in favor of his son, King Sunjong, who became the Yunghui Emperor (the second and last emperor of the Empire of Korea). When Sunjong attempted to send delegates to the Hague Peace Conference, Japan cited a violation of the Eulsa Treaty which required Korea to relinquish conduct of foreign affairs to Japan. That set the stage for the for Korea to become a protectorate of Japan.

In 1910, Japan annexed the Empire of Korea with the Japan-Korea Annexation Treaty, beginning a 35-year period of Japanese rule. Prior to the Korean Empire, several dynastic rulers of Goguryeo, Silla, Baekje, Balhae, and Goryeo claimed the right to imperial status and used imperial titles at one time or another. The abdication of Gojong marked the end of dynastic rule in Korea.