A religious martyr is a person who is killed as a result of maintaining and practicing religious faith. In the early years, of the Christian faith in Korea, several thousand Christians, most of them Roman Catholics, were martyred. The Catholic faith started to develop in Korea at the beginning of the seventeenth century, during the Joseon period, a time when outside influence of any kind was not welcomed in Korea. Catholicism was seen as a threat to the state ideology of Confucianism, and many Catholic monks, priests, and lay members were executed, producing as many as 8,000 or more martyrs.

The Early Christian Church in Korea 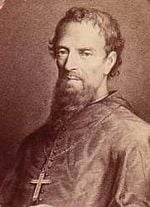 The Roman Catholic church began to develop in Korea at the beginning of the seventeenth century, brought by Koreans who had met the faith and been converted in China. They also brought translations of the scriptures from China, and the strong and dynamic Catholic communities were led almost entirely by lay people until the arrival of the first Catholic missionaries from France in 1836. The Protestant churches did not start sending missionaries until nearly 50 years later, in 1884.

The Catholic community suffered major persecutions in the years 1839, 1846, and 1866, producing at least 8,000 known martyrs, killed for following a false religion. Among them were the fervent Korean priest Andrew Kim Taegeon and the Korean lay catechist Paul Chung Hasang. The vast majority of the martyrs were simple lay people, including men and women, married and single, old and young. The members of this group of martyrs have been canonized as saints, with feast day September 20. Currently, Korea has the fourth largest number of saints in the Catholic world.

Robert Jermain Thomas (1839-1866), a Welshman, is the first Protestant missionary on record to have visited Korea, arriving in 1865, to distribute Chinese Bibles, about 20 years before the first organized Protestant evangelists began work in Korea. He returned to Korea again in 1866, on the General Sherman officially as an interpreter, continuing to also distribute Bibles. He was executed along with the rest of the ship's crew when the ship sailed too close to Pyongyang and was attacked by Korean forces. Thus, he became the first Protestant Korea martyr in Korea.

Many other Protestant missionaries and laymen were killed during the Japanese occupation. Many of the political activists killed during the March 1 Movement in 1919 were Christians. They are better described as political martyrs than religious martyrs, because they were killed as a direct result of their participation in political activism. From that time on, the Japanese occupation government was increasingly suspicious that any Christian might have political motives, and many Christians were imprisoned, tortured and killed.

At the end of the Korea War, there were an estimated 300,000 Catholics in North Korea, including a number of Benedictine monks. Today, according to Pyongyang, the number of Catholics in North Korea is less than 5,000. At the end of the war, some fled to the South. Others were killed, or gave up their faith. It is impossible to know how many became martyrs.

36 members of the Benedictine order associated with Tokwon Abbey in North Korea have been confirmed as killed by the Stalinist regime between 1949 and 1952, when they refused to abandon their faith. The 36 have been recommended for sainthood, and the Order of St. Benedict Waegwan Abbey in South Korea is working to move the process of their beatification and canonization forward.

Although the history of Catholicism in Korea is relatively short, as a result of the brutal persecutions of the church by the Joseon court, the number of martyrs is quite high, and Korea has the fourth largest number of Catholic saints of any country in the world. Pope John Paul II broke with tradition and held a canonization ceremony in Seoul, bestowing sainthood on 103 of the Korean Martyrs. 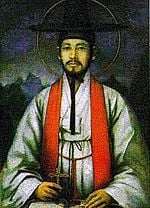 From the last letter of Andrew Kim Taegeon to his parish as he awaited martyrdom with a group of 20 persons:

My dear brothers and sisters, know this: Our Lord Jesus Christ upon descending into the world took innumerable pains upon and constituted the holy Church through his own passion and increases it through the passion of its faithful....

Now, however, some fifty or sixty years since holy Church entered into our Korea, the faithful suffer persecutions again. Even today persecution rages, so that many of our friends of the same faith, among whom am I myself, have been thrown into prison. just as you also remain in the midst of persecution. Since we have formed one body, how can we not be saddened in our innermost hearts? How can we not experience the pain of separation in our human faculties?

However, as Scripture says, God cares for the least hair of our heads, and indeed he cares with his omniscience; therefore, how can persecution be considered as anything other than the command of God, or his prize, or precisely his punishment?...

We are twenty here, and thanks be to God all are still well. If anyone is killed, I beg you not to forget his family. I have many more things to say, but how can I express them with pen and paper? I make an end to this letter. Since we are now close to the struggle, I pray you to walk in faith, so that when you have finally entered into Heaven, we may greet one another. I leave you my kiss of love.

Retrieved from https://www.newworldencyclopedia.org/p/index.php?title=Korean_Martyrs&oldid=1011027
Categories:
Hidden category:
This page was last edited on 24 April 2018, at 14:27.
Content is available under Creative Commons Attribution/Share-Alike License; additional terms may apply. See Terms of Use for details.