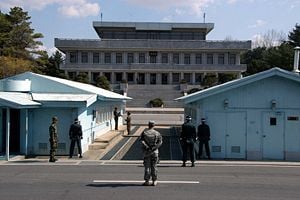 The Korean Demilitarized Zone, a strip of land running across the Korean Peninsula, serves as a buffer zone between North and South Korea. The DMZ cuts the Korean Peninsula roughly in half, crossing the 38th parallel on an angle, with the west end of the DMZ lying south of the parallel and the east end lying north of it. The most heavily armed border in the world, the DMZ extends 248 km/155 miles long and approximately 4 km/2.5 miles wide.[1]

The Berlin Wall and the Korean Demilitarized Zone along the 38th Parallel have symbolic and practical similarities. While the Berlin Wall stood, the stand off between the Soviet Union and NATO remained firm. Once the Berlin Wall collapsed, the Soviet Union and Chinese communist governments quickly crumbled. North Korea watched the crumbling of the communist world around it with Russian and China turning from staunch supporter to reluctant historical allies. North Korea has a firm determination to keep the Demilitarized Zone intact as a guarantee to its dictatorial control of the North and hope of conquering the South. 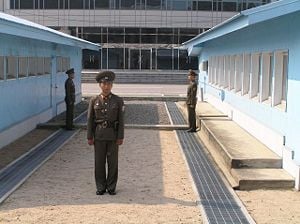 Panmunjeom, the Joint Security Area in the DMZ. View from the North...

The 38th parallel north, which cuts the Korean Peninsula roughly in half, stands as the original boundary between the U.S.-controlled and Communist-controlled areas of Korea at the end of World War II. Upon the creation of the Democratic People's Republic of Korea and the Republic of Korea in 1948, the DMZ became a de facto international border and one of the most tense fronts in the Cold War (see Division of Korea for more details).

Both the North and the South remained heavily dependent on their sponsor states, the Soviet Union and the United States, respectively, from 1948 through to the outbreak of the Korean War. The devastating conflict, which claimed over three million lives and saw the Korean Peninsula effectively divided along ideological lines, commenced on June 25, 1950, with a Soviet-sponsored DPRK invasion across the DMZ, and ended in 1953 after international intervention pushed the front of the war back to near the 38th parallel. In the ceasefire of July 27, 1953, an armistice agreement created the DMZ as each side agreed to move their troops back 2,000 meters from the front line, creating a buffer zone four kilometers wide. The Military Demarcation Line (MDL) goes right down the center of the DMZ and indicates the exact location of the front upon the signing of the agreement. A peace treaty never followed the armistice agreement, leaving the two Koreas technically still at war.

Owing to that stalemate, and genuine hostility between the North and the South, large numbers of troops face each other along both sides of the line. The armistice agreement explains exactly the number of military personnel, and weapons, the South and North may maintain within the DMZ itself. Soldiers from both sides may patrol inside the DMZ, but they may not cross the MDL. 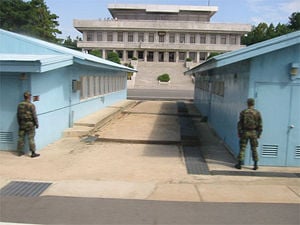 Panmunjeom, home of the Joint Security Area, sits inside the DMZ near the western coast of the peninsula. That constitutes the only place where North and South connect. A number of buildings exist on both the north and the south side of the MDL, a few built right on top of the MDL. The Joint Security Area has been the location where all negotiations since 1953 have been held, including a number of statements of Korean solidarity, which have generally amounted to little except a slight decline of tensions. The MDL goes right through the conference rooms, right down the middle of the conference tables where the North Koreans and the United Nations Command (primarily South Koreans and Americans) meet face to face.

Though generally calm, the DMZ has been the scene of much saber-rattling between the two Koreas over the years. A number of small skirmishes have occurred within the Joint Security Area since 1953. The Axe Murder Incident in August 1976 involved the attempted trimming of a poplar tree which resulted in two deaths and Operation Paul Bunyan. Before that time, both sides permitted soldiers to go back and forth across the MDL inside of the JSA, a privilege since revoked as a result of that incident.

Another incident occurred later when a Soviet dignitary, part of an official trip to the JSA (hosted by the North), ran across the MDL yelling that he wanted to defect. North Korean troops opened fire and chased him across the line. South Korean troops, protecting the defector, fired back and eventually surrounded the North Koreans. One South Korean soldier died in the incident. The defector expressed joy in his successful attempt, but sadness at the loss of life. Since that incident, the North Korean soldiers face one another so defectors cannot come upon them from behind. They have orders to shoot anyone who attempts to defect before they get to the line. 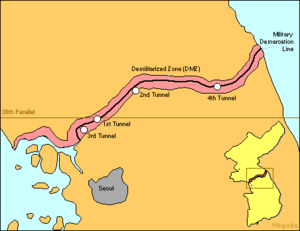 Map of the Korean DMZ. The DMZ is given in red. The demarcation line runs in the middle of the DMZ (black line).

Starting on November 15, 1974, the South discovered four tunnels leading under the DMZ, by use of water-filled pipes dug vertically into the ground near areas of suspected tunneling activity. The first of the tunnels runs forty-five meters below surface for about 3.5 kilometers, penetrating over 1,000 meters into the DMZ. The first tunnel discovered featured electric lines and lamps, as well as railways and paths for vehicles. The second, discovered on March 19, 1975, runs the same length, laying between 50 and 160 meters below ground. The discovery of the third tunnel occurred on October 17, 1978, as the result of, kike the previous two, a tip off from a North Korean defector. That tunnel runs about 1,600 meters, laying about 150 meters below ground. The fourth tunnel, discovered on March 3, 1990, has an almost identical structure as the second and the third tunnel.

The north-south directions of the four tunnels, the fact that they do not branch, the progressively more advanced planning of each one (for example, the third tunnel slopes upward slightly as it progresses southward, so that water does not stagnate), and the orientation of the blasting lines within each one indicate that North Korea dug the tunnels, for the purpose of invasion, and not coal mining, as the North claimed upon their discovery (no coal can be found in the tunnels, dug through granite, but some of the tunnel walls at some point had been painted black to give the appearance of coal). The tunnels have enough room to permit the passage of an entire division in one hour. Today, tourists can visit some of the tunnels as part of guided tours from the South, including the famous tunnel tour, Third Tunnel of Aggression, discovered in the 1970s.

Villages in the Demilitarized Zone

Within the DMZ two villages exist: one run by the North and the other by the South. Daeseong-dong, found on the southern side of the DMZ, constitutes a traditional village strictly controlled by the South Korean government. For instance, one must have ancestral connections to the village to live there. Those restrictions serve to keep the population of the village small. In the North, Gijeong-dong, which North Koreans call "Peace Village," has only a small caretaker population. Through the armistice agreement, the North insisted that they have the right to maintain a town within the borders of the DMZ since the South had one. UN troops call this Propaganda Village because only a small group of people cleaning and turning on lights reside within the village. Although from afar the village appears modern, a closer look with binoculars reveals no glass within the windows of the buildings. In the past, a loudspeaker broadcast North Korean propaganda across to Daeseong-dong for as much as twenty hours a day, and reciprocal pop music and South Korean exhortations blasted back. Those broadcasts ceased by mutual agreement in 2004. 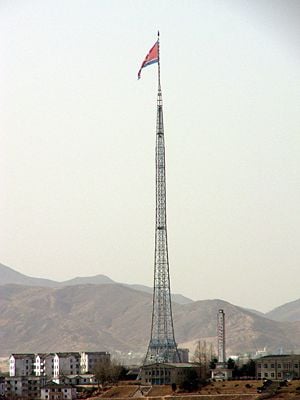 The tallest flagpole in the world, in Kijong-dong.

The North Korean building facing South Korea in the Joint Security Area has the look of "a façade designed to look large and impressive, in reality only a frame a few feet (one meter) thick." Accounts from tourists having visited the northern side of the JSA reveal that the building a functionable building.[3]

Propaganda in the North has stated that the U.S. and South Korea have built a massive unclimbable wall across the entire length of the DMZ (the Korean wall). Upon the collapse of the Berlin Wall, propagandists in the North seized upon its value and proclaimed that huge system of fencing and tank barriers a wall equivalent to the one in Berlin. Furthermore, signs on the Northern side describe the ceasefire like this:

Panmunjeom (RR)/P'anmunjŏm (MR), the site of the negotiations that ended the Korean War, serves as the center of human activity in the DMZ. The village, located on the main highway. The railway line (called the Gyeongui Line before division as well as in the South today, and the P'yŏngbu Line in the north) connecting Seoul and P'yŏngyang. The highway on rare occasions moves people between the two countries, and brings supplies to South Korean factories located in North Korea (much like Checkpoint Charlie in Cold War East and West Berlin). The railway line has been reconnected as part of the general thawing in the relations between North and South. A new road and rail connection also has been built on the Donghae Bukbu (Tonghae Pukpu) Line.

Apart from Panmunjeom, the Joint Security Area and two model villages, the DMZ serves as home to a wide variety of wild life and countless landmines. Proposals have been forwarded that, following the reunification of Korea, the DMZ remain a wildlife nature preserve.[4] Both Koreas deploy the majority of their military personnel and technology within 160 kilometers of the Military Demarcation Line that runs through the middle of the DMZ. In practical terms that represents over one million troops on either side, plus large numbers of tanks, long-range artillery, and armored personnel carriers. Arguably, the DMZ is the last front of the Cold War.

Retrieved from https://www.newworldencyclopedia.org/p/index.php?title=Korean_Demilitarized_Zone&oldid=1011025
Categories:
This page was last edited on 24 April 2018, at 14:25.
Content is available under Creative Commons Attribution/Share-Alike License; additional terms may apply. See Terms of Use for details.