From New World Encyclopedia
Jump to:navigation, search
Previous (Seoul)
Next (Separation of Church and State in the United States)

Not to be confused with the University of Seoul.

Seoul National University (SNU) is a national research university in Seoul, South Korea, founded in 1946. SNU, the first national university in South Korea, served as a model for the many national and public universities in the country. Through its 60-year history, SNU has grown to the level of most competitive, belonging to the Korean equivalent of the Ivy League colleges in the United States, the SKY universities with Korea University and Yonsei University. SNU embraces sixteen colleges and six professional schools, with a student population of approximately 30,000. SNU maintains two campuses in Seoul, the main campus in Gwanak, and the medical campus (named Yeongeon Campus after its neighborhood) in Jongno. SNU, notable for its "fleet-style" system, offers diplomas in a multitude of academic fields, from the liberal arts to nursing.

Seoul National University's history presents a cross-section view of Korea's history since the end of World War II. Korea had no national universities at the beginning of the twentieth century. Education had been focused on preparing yangban to the Gwageo or national civil service examination. Yangban enjoyed the opportunity to prepare for the examination, which focused on the Confucian classics, in village schools. Japan sponsored the establishment of national universities during the occupation of Korea, opening the era of college education for all Koreans. Students still have to study outside the public K-12 system in hakwans to score high enough for admission to Seoul National University. The establishment of Seoul National University, and the running of the university by the South Korean government, marked a major mile stone in the development of higher education in South Korea. 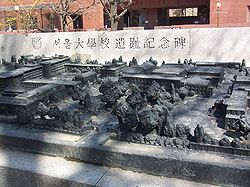 Did you know?
During the Korean War Seoul National University was temporarily relocated to Busan along with other universities in South Korea

Seoul National University has earned the reputation as one of the most competitive universities in South Korea. From 1981 to 1987, when an applicant could apply only to one university at a time, more than 80 percent of the top 0.5 percent scorers in the annual government-administered scholastic achievement test applied to SNU, many of them unsuccessfully. No comparable data exist for direct comparison between SNU and non-SNU applicants after 1988, due to an extensive change in South Korea's college entrance system.

SNU graduates dominate South Korea's academics, government, politics and business. The concentration of SNU graduates in legal, official, and political circles stands particularly high. Two-thirds of South Korean judges have graduated from SNU, although the country's judicial appointment system remains based solely on open competitive examinations. In government, slightly more than half of South Korea's elite career foreign service corps, recruited on the basis of a competitive higher diplomatic service exam, graduated from SNU. Similarly, among the high-ranking government officials recruited by an equally competitive higher civil service exam, SNU graduates take up more than 40 percent. On the political side, four out of seven presidential candidates in 2002 graduated from SNU. Some South Koreans criticize the school for elitist and bureaucratic characteristics.

Seoul National University maintains two Seoul-based campuses: the Gwanak Campus, situated in the neighborhood of Sillim-dong, Gwanak-gu; and the Yeongeon Campus, north of the Han River in Yeongeon-dong, Jongno-gu. The SNU Comprehensive Plan established the main campus in Gwanak-gu in 1975. At present, approximately 200 buildings, over half constructed since 1990, make up the campus. The school’s medical, dental and nursing schools, as well as the main branch of Seoul National University Hospital, situate on the former site of Kyungsung University’s medical department at the Yeongeon Campus. In 2003, the Colleges of Agricultural and Life Sciences and Veterinary Medicine relocated from Suwon to Gwanak.

The main campus, Gwanak Campus, stands in the southern part of Seoul served by its own subway station on Line 2. Yeongeon Campus, the medical campus, sits on Daehangno (University Street), northeast Seoul. The defunct Suwon Campus, the agricultural campus, also known as the Sangnok Campus (Evergreen Campus), used to be located in Suwon, about 40 km south of Seoul. The agricultural campus moved to Gwanak in Autumn 2004, but some research facilities still remain in Suwon.

In February 2010 Seoul National initiated a memorandum with the city of Siheung to establish a global campus. Signed with the city's mayor and governor of Gyeonggi for administrative assistance, the University acquired 826 thousand square-meters (204 acres) of property to secure influence in the west-coast economic zone, abut the Songdo International Business District, access Pyeongtaek harbor, gain better location to the international airport, seaport and other wide-area transportation catchments, and achieve shared growth with the city's industrial research parks.[3]

The land acquisition will increase the university's size by 58 percent over its current 1.4 million square-meters (350 acres) to 2.2 million square-meters (550 acres) and headcount by an expected 10,000 people or 33 percent of its current figure.[4] Along with lecture halls and additional liberal arts and graduate courses, the initiative will add a medical complex including a research hospital and training center, research center for dentistry and clinical pharmacology, dormitories, apartments, an international middle and high school, and other facilities.

Seoul National University Library is located behind the university administrative building in the 62nd block of the Gwanak Campus. On December 31, 2005, the library’s total collection of books, including all the annexes, numbered approximately 2.6 million volumes. The present chief librarian, Dr. Park Myeong-jin, professor of media and information in the College of Social Sciences, took office in 2006. The Central Library has constructed a digital library, which provides access to the regular library collection and to university publications, ancient texts, and theses, including a vast collection of images of pamphlets, lecture slides, and insects. The digital library also offers access to video of university exhibitions, scientific events, symposiums, and seminars.

In 1966, provisions the library systematized its collections, creating an annex for each of the university’s colleges: engineering, education, physics, art, law, theology, pharmacology, music, medicine, dentistry, administration, and agricultural sciences. Two years later, in 1968, the university added libraries for newspapers and the liberal arts to bring the total number of annexes to fourteen. When the main branch moved to the Gwanak Campus, the education, physics, legal, theological, administrative, newspaper, liberal arts, and pharmacological libraries combined in a single building.

The following year the art and music libraries also combined in the main branch, while the dentistry and medical libraries amalgamated. With the integration of the engineering library into the main branch in 1979, only the agricultural and medical libraries remained as separate annexes. A new law library established in 1983 with funds from alumni, and in 1992 the Kyujanggak Royal Library subdivided from the main library as an independent organization, now named the Kyujanggak Institute for Korean Studies.

With the transfer of the College of Agricultural Sciences from the Suwon to Gwanak Campus, the Agricultural Library also moved in 2005. As of 2006 seven remaining library annexes for management, the social sciences, agriculture, law, medicine, dentistry, and international studies reside on the campus. 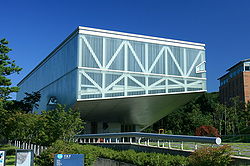 Seoul National University Museum of Art established in 1995 with contributions from the Samsung Cultural Foundation, after a proposal from Dr. Lee Jong-sang, a professor of Oriental Art. Design was by the Dutch architect, Rem Koolhaas, with construction entrusted to the Samsung Group. This 4450m² structure sits three stories above and below ground. Its major distinguishing feature is the forward area which almost appears to be floating in the air. Construction was undertaken from 2003 to 2005, just off the Gwanak Campus’ main gate while the opening took place on the June 8, 2006. Dr. Jung Hung-min assumed the directorship of the gallery in 2006.

The first edition of the paper published while seeking refuge from the ravages of the Korean War, on February 4, 1952. In 1953 the office moved to Dongsoong-dong in Seoul, publishing editions for high schools as well from 1958. Financial difficulties in 1960 lead the paper to cease printing for a time. Relocating to the Gwanak Campus in 1975, the paper has been in continuous publication until the present day. At the time of its first launch the paper sold for 500 won a copy, sometimes twice a week. Now, the university distributes the paper for free every Monday. The school paper suspends publication during schools breaks or exams.

Retrieved from https://www.newworldencyclopedia.org/p/index.php?title=Seoul_National_University&oldid=1098013
Categories:
This page was last edited on 26 January 2023, at 09:51.
Content is available under Creative Commons Attribution/Share-Alike License; additional terms may apply. See Terms of Use for details.