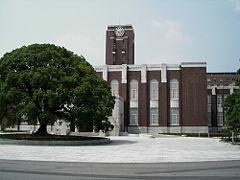 The Clock Tower, completed in 1925, is the most recognizable structure on the campus of Kyoto University

Kyoto University(京都大学, Kyōto daigaku), abbreviated to (Kyodai, 京大, Kyōdai) is a national coeducational research university in Kyoto, Japan. It is the second oldest university and one of the leading research universities in the country and in Asia. Its predecessor, the Chemistry School (舎密局, Seimi-kyoku), was founded in 1869 to train scientists to support the rapid industrialization of Japan during the Meiji period. After being established as Kyoto Imperial University (京都帝國大學, Kyōto teikoku daigaku) in 1897, its science faculties and research centers continued to collaborate closely with Japanese industry. Since 1913, it has also been the home of the Kyoto School, a loosely-associated group of philosophers who took a significant role in interpreting Buddhist and Asian philosophy for Western thinkers, and Western and Christian thought for Asian scholars.

Renamed Kyoto University in 1947, the school now has a total of about 22,700 students enrolled in its undergraduate and graduate programs, 2,900 faculty members and 2,500 staff. It advocates "traits of liberty" such a free-thinking, self-reliance and dialogue, and conducts significant creative research. Among its alumni are five Nobel Prize Laureates in fields of fundamental natural science. In recent decades the university has developed unique international research centers and an extensive international exchange program. It has also established the Graduate Schools of Human and Environmental Studies, Energy Science, Asian and African Area Studies, Informatics, Biostudies and Global Environmental Studies to study the critical issues of the twenty-first century.

The forerunner of Kyoto University was the Chemistry School (舎密局, Seimi-kyoku) founded in Osaka in 1869, as part of the new Meiji government’s initiative to rapidly industrialize and modernize Japan. The Seimi-kyoku was replaced by the Third Higher School (第三髙等學校, Daisan kōtō gakkō) in 1886, which was transferred in the same year to the university's present main campus.

Did you know?
Kyoto University was founded to train scientists to support the rapid industrialization of Japan during the Meiji period

During its early years, the university presidents were chosen by the Ministry of Education, but the faculty increasingly sought more autonomy. In 1915, the opinions of the Faculties were considered for the first time in the selection of a new president, and in 1919, a system for the election of presidents by the faculty members themselves was introduced.[1] During the period between World War I and World War II, an increasingly militaristic and nationalistic government sought to dominate the university and restrict its policies. The end of World War II and the subsequent U.S. Occupation of Japan restored a liberal atmosphere. In March 1947, the School Education Law brought widespread reforms to the Japanese education system, emphasizing equal educational opportunity and expanding all levels of education, including higher education. In October 1947 Kyoto Imperial University was renamed Kyoto University. In May 1949 the National School Establishment Law was enacted, and the Third Higher School (Dai San Kou) merged with the university and became the Faculty of Liberal Arts (教養部, Kyōyōbu), which opened in September 1949. Kyoto University was reorganized as a four-year instead of a three-year university, and an eighth Faculty, the Faculty of Education, was added.

In the past two decades, Kyoto University has placed more emphasis on activities at the graduate level, and has established the Graduate Schools of Human and Environmental Studies, Energy Science, Asian and African Area Studies, Informatics, Biostudies and Global Environmental Studies to study the critical issues of the twenty-first century. These new disciplines have mandated the reorganization of long-established and traditional academic domains.

As of 2008, Kyoto University had ten Faculties, seventeen Graduate Schools, 13 Research Institutes, and 29 Research and Educational Centers. Since 2004, under a new law which applies to all national Japanese universities, Kyoto University has been incorporated as a national university corporation. This has led to increased financial independence and autonomy, but Kyoto University is still partially controlled by the Japanese Ministry of Education (文部科学省, 文部科学省; Monbu kagakushō or Monkashō).

The emblem of Kyoto University combines the camphor tree that stands in front of the Clock Tower with a logo made from the Chinese characters for "University." The Chinese characters had been used to represent the university since its pre-World War II days as Kyoto Imperial University. The original design of the current emblem was suggested by Mr. Ogawa, a faculty member in the 1950s, and appeared on the university's official letterhead and administrative documents. As the university became increasingly involved in international academic exchanges, the need for an official emblem became evident. Design studies eventually resulted in the present form of the university emblem, which was officially adopted by the University Council on November 16, 1990.

Kyoto University’s stated mission is to sustain and develop its historical commitment to academic freedom, and to pursue harmonious coexistence within the human and ecological community on this planet. It seeks to integrate pure and applied research in the humanities, sciences and technology, and to educate outstanding and humane researchers and specialists who will contribute responsibly to the world’s human and ecological community. This goal has been implemented in the establishment of the Research Institute for Sustainable Humanosphere in 2003 to study the environment, and the Kokoro Research Center in 2007 to study human behavior and consciousness.[2] Kyoto University also promotes its role as an international institution, engaging in foreign academic exchange and striving to contribute to global well-being.

The university has three campuses in Yoshida, Kyoto; in Gokashō, Uji; and in Katsura, Kyoto.

Yoshida Campus is the main campus, with some laboratories located in Uji. The Graduate School of Engineering is housed at the newly-built Katsura Campus.

The Clock Tower, the most recognizable structure of the Kyoto University campus, was designed by Goichi Takeda, the university's first Professor of Architecture, and completed in 1925. Art Nouveau Secessionist-style design is evident in all of its elements, and the exterior gives the building an appearance of immense historical significance. The Clock Tower was one of the first university structures to be built with reinforced concrete, using the most advanced technology of the time. The interior of the hall itself was assembled using angle-plates, rivets and steel trusses. In the eight decades since it was opened, the Clock Tower has come to symbolize Kyoto University.[3]

The “Kyoto School” is a loosely affiliated group of Japanese philosophers, originating around 1913 with Nishida Kitaro. Kitaro steadfastly encouraged independent thinking among the academics who gathered around Kyoto University as a de facto meeting place. To be formally accepted as a member of the movement, a scholar had to be teaching at Kyoto University or at a nearby affiliated school, share Nishida's basic assumptions regarding metaphysics and the concept of "nothingness," and use the same philosophical vocabulary as Nishida.[4] Although the group was largely informal, traditionally the occupant of the Chair of the Department of Modern Philosophy at Kyoto University was considered its leader. Most members of the Kyoto School were strongly influenced by the German philosophical tradition, especially through the thought of Nietzsche and Heidegger, and all had strong ties to the Buddhist religion. Philosophers of the Kyoto School took a significant role in interpreting Buddhist and Asian philosophy for Western thinkers, and Western and Christian thought for Asian scholars.