Jilin (Chinese: 吉林; pinyin: Jílín; Wade-Giles: Chi-lin; Postal map spelling: Kirin; Manchu: Girin ula), is a province of the People's Republic of China located in the northeastern part of the country. Jilin borders North Korea and Russia to the east, Heilongjiang to the north, Liaoning to the south, and Inner Mongolia to the west. The name was transliterated to Kirin before standardization to pinyin. The name "Jilin" probably originates from Girin ula, a Manchu term meaning "along the river." This was transcribed into Jilin wula (T: 吉林烏拉 / S: 吉林乌拉) in Chinese, then shortened to Jilin. The literal meaning of the Chinese characters for "Jilin" is "auspicious forest."

Jilin has played an integral part in both the history of China and the history of Korea. Korea has pointed to the unbroken period from 2333 B.C.E. to 926 C.E. when a succession of Korean kingdoms ruled the region: Gojoseon, Goguryeo, and Balhae. Since 926 C.E., various Chinese dynasties and people have ruled the region; still a large ethnic Korean population of over one million Koreans live in Jilin. Since North Korea's severe food shortages, especially in its northeast, began in the 1990s, North Koreans have sought to illegally migrate to Jilin, despite that both the Chinese and North Korean governments prohibit it. Although many international NGOs regard these migrants as refugees, China turns over those it catches to North Korean authorities, and the North punishes those who sought to escape.

In ancient times, Jilin was inhabited by various peoples, including the Mohe and the Wùjí (勿吉). It also formed a part of the Goguryeo kingdom. The kingdom of Balhae was established in the area from 698 to 926 C.E. Later on, the region fell successively under the domination of the Khitan Liao Dynasty, the Jurchen Jin Dynasty, and the Mongol Yuan Dynasty. During the Qing Dynasty, much of the area was under the control of the General of Jilin, whose area of control extended to the Sea of Japan to encompass much of what is Russia's Primorsky Krai today. Immigration of Han Chinese was strictly controlled during this period.

However, after the Primorsky Krai area was ceded to Russia in 1860, the Qing government began to open the area up to Han Chinese migrants, most of whom came from Shandong. As a result, by the beginning of the twentieth century, Han Chinese had become the dominant ethnic group in the region. In 1932, the area was incorporated into Manchukuo, a puppet state set up by Japan, and Changchun (then called Hsinking), capital of Jilin today, was made the capital of Manchukuo. After the defeat of Japan in 1945, the region, together with the rest of northeastern China, was handed over to the Chinese communists by the Soviet Union. Manchuria then became the staging ground from which the communists eventually conquered the rest of China.

In 1949, at the founding of the People's Republic of China, Jilin province was smaller, encompassing only the environs of Changchun and Jilin City. The capital was at Jilin City, while Changchun was a municipality independent from the province. In the 1950s, Jilin was expanded to its present borders today. During the Cultural Revolution, Jilin was expanded again to include a part of Inner Mongolia, giving it a border with the independent state of Mongolia, though this was later reversed. In recent times, Jilin has, together with the rest of heavy industry-based Northeast China, been facing economic difficulties with privatization. This has prompted the central government to undertake a campaign called “Revitalize the Northeast.”

Jilin is highest in altitude in the southeast, and its height drops gently towards the northwest. The Changbai Mountains run through its southeastern regions, and contains the highest peak of the province, Baiyun Peak, at 2691 m. Other mountain ranges include the Jilinhada Mountains, Zhang Guangcai Mountains, and Longgang Mountains.

Jilin is drained by the Yalu and Tumen Rivers in the extreme southwest (which together form the border between the People's Republic of China and North Korea), by tributaries of the Liao River along the southern border, and by the Songhua and Nen rivers, both eventually flowing into the Amur. 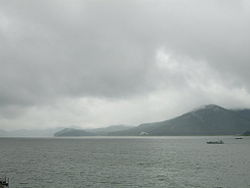 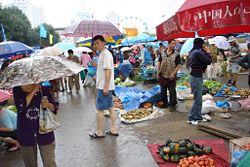 Jilin consists of eight prefecture-level cities and one autonomous prefecture:

Jilin is not only one of the most economically important provinces, but it is also one of the main commodity grain producers in all of China. In 2000, the province's total agricultural output value was RMB 59.77 billion and its total grain output was 32.76 billion. Jilin's agricultural production is centered upon a variety of different crops, including soybean, corn, sorghum, millet, rice, small red bean, wheat, tuber, sunflower seeds, beets, and tobacco. Rice is mostly cultivated in the eastern parts, in areas like Yanbian prefecture. The herding of sheep is also an important activity in the western parts, in areas like Baicheng prefecture-level city. Jilin's 2.96 million hectares of prairies in the northwest make it an ideal place for animal husbandry production, and a major production base of commercial cattle and fine wool sheep in Northern China.

Jilin has abundant forest resources. The Changbai Mountain area is one of the largest forested areas in China, and it produces top grade pine trees, while also serving as the source of various precious traditional Chinese herbs such as ginseng and deer pilose antler, as well as native products such as mushrooms and fungi. It is also home to several types of rare animal breeds. 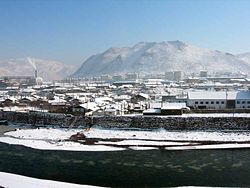 Along with its importance as an agricultural center, the province is rich in mineral resources such as coal, iron, copper and gold, which are widely dispersed throughout the province. Compared to other parts of China, Jilin also has extensive deposits of Kieselguhr, wollastonite, floatstone, and molybdenum.

Jilin has a very strong industrial base, with more than 14,000 industrial enterprises and six dominant industry sectors. These six include the engineering, petrochemical, pharmaceutical, food, metallurgical and forestry industries. In addition to these six sectors, Jilin leads the country in its production of automobiles, railway cars, tractors, ferroalloy, carbonic products, timber, sugar, crude oil, vegetable oil and mineral products.

Based on statistics gathered in 2000, there were 35 institutions of higher learning in Jilin, with a faculty of 41,813 and combined enrollment of 175,288. In addition, there were 2,034 secondary schools with 144,046 teachers and 1,677,454 students and 9,435 primary schools with 173,182 teachers and 2,415,858 pupils. In terms of educational level, the number of people with a college education has increased the fastest, followed by those with a junior or senior high school diploma. The number of people with a primary school education has grown the slowest, and their proportion is dropping in relation to the overall population. According to the data of the 2000 population census, the illiterate population in Jilin was 1.25 million and the illiteracy rate was 4.57 percent. In general, the province remains underdeveloped educationally, especially in terms of higher education. Large disparities exist between men and women, between urban and rural areas, and between different regions of the province.

Jilin's culture is part of a culture of Northeast China that is quite homogeneous across all of the northeastern China. In particular, Jiju, or Jilin Opera, is a form of traditional entertainment that Jilin has innovated over its short migrant history.

In addition to this, the ethnic Koreans of Jilin also have their own distinct culture.

Jilin is home to several sights which help boost its domestic tourism industry. In the provincial capital of Changchun there are several notable sights, including the former government office of the Manchurian State established by the Japanese during World War II, the Jingyuetan Forest Park, the Monument to the Martyrs of the Soviet Red Army, the Automobile Town, and the Changchun Film Studio.

The Goguryeo sites and tombs found in Ji'an, Jilin, including Wandu, Guknae Seong, and the pyramidal General's Tomb, have been listed as part of a UNESCO World Heritage Site.

In addition, the Ancient Tombs at Longtou Mountain, including the Mausoleum of Princess Zhenxiao, are royal tombs of the Balhae kingdom and are located in Yanbian Korean Autonomous Prefecture.

Jilin also has several other attractions, including Baekdu Mountain and Heaven Lake, (which is on the border with North Korea) that are popular tourist destinations due to their natural scenery. In general, Jilin has much to offer in natural beauty and resources, including fertile land, dense forests, rich mineral deposits, countless plants and herbs, a wide variety of birds and animals, and vast grasslands.

Retrieved from https://www.newworldencyclopedia.org/p/index.php?title=Jilin&oldid=1074878
Categories:
Hidden category:
This page was last edited on 1 August 2022, at 12:43.
Content is available under Creative Commons Attribution/Share-Alike License; additional terms may apply. See Terms of Use for details.