Ningxia, a stop along the Silk Road, had been influenced by Islam early in its history, many citizens converting to Islam through contact with Muslim merchants. The presence of the Hui ethnic group, with pronounced Arab and Persian features, may have enhanced the pervasive impact of Islam upon Ningxia culture and history. Prior to the arrival of Islam, Buddhism and tradition Chinese culture had a powerful impact on the province.

Ningxia and its surrounding areas were incorporated into the territory of the Qin Dynasty starting as early as the third century B.C.E. Throughout the subsequent Han and Tang dynasties, new settlements were added to the region, and by the eleventh century the Tangut tribe had established the Western Xia Dynasty in Ningxia, on the outskirts of the Song Dynasty, which ruled most of China during that time.

Later on, the region came under Mongol domination after Genghis Khan conquered Yinchuan in the early thirteenth century. After the Mongols departed and their influence faded, Turkic-speaking Muslims slowly began moving into Ningxia from the west. This shift in demographics and religious difference created unavoidable tensions between the Han and the Hui ethnic groups in the following centuries.

In 1914, Ningxia was merged with the province of Gansu. However, in 1928 it was detached and became its own individual province. Between 1914 and 1928, the Xibei San Ma brothers (literally "three Mas of the northwest") ruled the provinces of Qinghai, Ningxia and Gansu.

In 1958, Ningxia formally became an autonomous region of China under the authority of the communist People's Republic of China. In 1969, its border was extended to the north and the region acquired parts of the Inner Mongolia autonomous region, but these changes were reversed in 1979, leaving the area with its current borders. 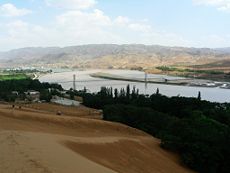 Shapotou, location of the Tengger Desert

Ningxia is a relatively dry, desert-like region, which is a characteristic shared by much of northern China. The semi-arid, Loess Plateau occupies the southern and eastern part of the province, while the Ningxia Plain stretches across the northern part, with the Yellow River running through it. The largest desert in the region is the Tengger desert in Shapotou.

While the province is dry, there is enough significant irrigation to support the growing of a variety of crops, including wolfberry, which is a commonly consumed fruit throughout the region and throughout China as a whole. The Yellow River flows through the north, providing the largest source of irrigation. The Yellow River basin, with its various tributaries, covers nearly 75 percent of Ningxia's total land area. In addition, the Qingshui River flows through the center of the southern portion of the province, and flows northward to meet the Yellow River.

The region is 1,200 km from the sea and has a continental climate with average summer temperatures rising to between 17 and 24°C in July and average winter temperatures dropping to between -7 and -10°C in January. Seasonal extreme temperatures can reach 39°C in summer and -30°C in winter. The diurnal temperature variation in summer is 17°C. Annual rainfall averages from 190 to 700 millimeters, with more rain falling in the south of the region.

Agriculture serves as an important part of Ningxia's economy, with most of the crops being grown along the main waterways of the Yellow River basin. Some of the region's basic crops include: wheat, millet, potatoes, corn, sorghum, rapeseed, soybeans, flax, and hemp. In addition to these however, Ningxia is also the principal region of China where wolfberries are grown. These fruits are known for their tremendous nutritional value, as they are some of the only fruits to contain not only vitamins and anti-oxidants, but also protein. The most robust variety of wolfberries are reputed to be found in Ningxia, which makes them especially important in the region.

Ningxia is rich in mineral resources, with verified deposits of 50 kinds of minerals including coal, gypsum (for which it leads all of China), oil, natural gas, pottery clay, quartz sandstone, and barite. There are also sizable quantities of phosphorus, firestone, copper, iron, and a variety of other minerals.

Industry in Ningxia has developed very rapidly in the last few decades, as China has experienced its economic boom. Many different industrial enterprises have been created, including coal, electric power, metallurgy, petroleum, heavy machinery, chemicals, building materials, textiles, synthetic fabrics, and plastics. These various industries have created a strong and relatively full system of industry for the region. 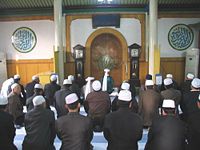 Ningxia is the home of the Hui, one of the officially recognized Chinese ethnic minority groups. While some Hui are ethnically indistinguishable from the Han (China's majority ethnic group), many Hui retain Central Asian and Middle Eastern genetic features, most notably similar to Arabs and Persians, such as dark skin and lighter-colored eyes.

As a stop along the legendary Silk Road, the Hui were heavily influenced by Islamic traders, and as a result, many of them became Muslims. In general, Muslims in China live predominantly in the areas that border Central Asia, Tibet, and Mongolia, such as Xinjiang, Gansu, Qinghai, and Ningxia, which has earned those areas the collective name, the "Quran Belt." This Muslim presence has given these areas a uniquely different culture, which is entirely distinct from the various regional Han Chinese cultures of China. Characteristics of this can be seen strongly even today in Ningxia, through Hui architecture, customs, and clothing.

At the establishment of Ningxia as an autonomous region in 1958, the educational system was fairly underdeveloped and inadequate to meet the needs of the population. At that time, there was not a single university in the province. Since then, however, there has been a steady trend of continuous progress in developing a stronger educational system.

In addition to increasing the standards of higher education and vocational education for adults, the province has also established a high enrollment rate of school age children of 97.26 percent. The nine-year compulsory education reform was made possible in 16 counties throughout the region, covering 68.3 percent of the population. The goal of eliminating illiteracy among the young and middle-aged population in the region has also been attained. Recently, the People's Republic of China government has initiated a "revitalize the northeast" campaign, which seeks to improve both the education and economic systems of many of the provinces in northeast China. It is very likely that these policies will also improve the education system in Ningxia, adding even greater results to the already positive current trends. 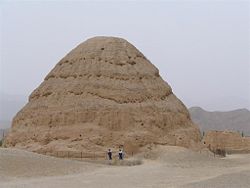 Ningxia is home to a variety of different tourist locations. Its capital city of Yinchuan (also called the "Phoenix City") is situated in the remote northwest of China, but is a 1,000-year-old city that is well-known as a cultural stronghold beyond the Great Wall. The old sector of Yinchuan to the west is green and peaceful, and contains most of the places of interest. It houses the 1,500–year–old Haibao Pagoda, which is one of the most famous examples of Buddhist architecture from the West Xia Kingdom. It is also home to the Western Xia Imperial Tombs, which are popularly known as the "Pyramids of China," because they house the remnants of nine Western Xia emperors' tombs, as well as 200 other tombs within their 50-km² area.

Another famous site in Ningxia is Liupan Mountain, which is located in the southern part of the region. It is an area that is famous for its picturesque scenery, which has earned it the nickname, the 'green islet'. Along with this, the Sand Lake Scenic Resort is a national tourist attraction, well known for its famous lake, sand dunes, reeds, birds and fish. During the period between May and September, the lake becomes a paradise for a dozen or so varieties of precious bird species, including swans, white and gray cranes, black storks, and wild geese.

The area of Shapotou is home to the Tengger Desert, and it also houses the Desert Research Center, which was established in 1956 in order to find ways of preventing the desert sands from encroaching onto newly built railways or northern China.

Retrieved from https://www.newworldencyclopedia.org/p/index.php?title=Ningxia&oldid=1087452
Categories:
Hidden category:
This page was last edited on 15 November 2022, at 04:50.
Content is available under Creative Commons Attribution/Share-Alike License; additional terms may apply. See Terms of Use for details.