Stork is the common name for any of the large, long-legged, long-necked wading birds with long stout bills comprising the family Ciconiidae of the order Ciconiiformes. There are 19 living species of storks in six genera.

Storks' size, beauty, grace, serial monogamy, and faithfulness to an established nesting site contribute to their prominence in human culture over many centuries and the general affection held toward them. Among symbols, they have been associated with the soul in Ancient Egypt, a devout woman in Hebrew, a chaste marriage in early Christianity, and a symbol of childbirth in popular Western Culture. There unique behaviors add to the human fascination with nature.

Regardless of their values, many species of storks have declined due to anthropogenic factors, particularly habitat destruction due to such factors as draining wetlands for agricultural, residential, or commercial purposes. The Oriental white stork, Storm's stork, and greater adjutant are considered to be endangered species; the lesser adjutant and milky stork are listed as Vulnerable, and the painted stork and black-necked stork are listed as Near Threatened (Grzimek et al. 2004). Other populations are threatened in particular locales, such as the wood stork populations in the Florida Everglades, which declined dramatically after the ditching and diking of this "River of Grass" and its conversion to intensive residential and agricultural purposes.

With their long legs, long necks, and long bills, storks are similar in appearance to herons, another wading bird in the order Ciconiiformes, although herons comprise the family Ardeidae while the storks comprise Ciconiidae. Like herons, storks also tend to have a straight bill, but there are four species of stork with curved bills. The easiest way to distinguish storks from herons generally is in their characteristic way of flying: Both fly with their legs trailing, but herons fly with their necks retracted, whereas storks fly mostly with their necks outstretched— although some with very heavy bills, such as the marabou, may retract the neck for balance while flying (Grzimek et al. 2004). Herons also tend to be of much slighter build, and storks, unlike herons, lack powder down. This is a special type of down feathers, which differ from the usual down as they are exceptionally fine and produce a dust between the frons.

Storks have white, black, and gray plumage, but the bills may have striking combinations of red, black, and yellow (Grzimek et al. 2004). Some species lack feathers on the neck and head. Storks have no syrinx and are mute, giving no bird call; bill-clattering is an important mode of stork communication at the nest. 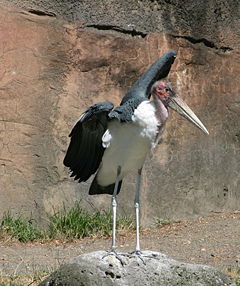 Storks are medium to large sized wading birds, ranging from about 75 to 152 centimeters (30 to 60 inches) in length and 1.3 to 9 kilograms (2.9 to 20 pounds) (Grzimek et al. 2004). The marabou stork, Leptoptilos crumeniferus, is a huge stork, with large specimens thought to reach a height of 152 centimeters, a weight of nine kilograms, and have a wingspan at least 3.2 meters (10.5 feet). In the last regard, it shares the distinction of having the largest wingspan of any landbird with the Andean condor. Unlike most storks, the three Leptoptilos species fly with the neck retracted like a heron.

Storks can be found on all continents except Antarctica and occur in most of the warmer regions of the world. They have a strong preference for tropical climates, and the only representative in North America is the wood stork, which has a small and endangered population in southern Florida (although it mainly is found breeding in South America, Central America, and the Caribbean).

Storks live in mainly lowland habitats and many species prefer wetlands, although some, such as maribou, live in drier areas (Grzimek et al. 2005). Storks tend to live in drier habitats than the related herons, spoonbills, and ibises. The black stork lives part of the year in forest areas in Eastern Europe and Asia (Grzimek et al. 2004). Many species of stork are migratory. 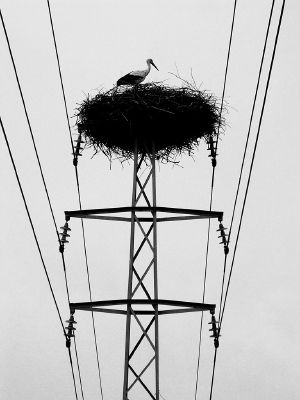 Storks are carnivores and eat frogs, fish, insects, and earthworms, and even small birds, mammals, or young crocodiles. The wood stork, which hunts almost entirely by touch using its open, sensitive bill, has been recorded as reacting in 25 milliseconds, the fastest recorded response rate of any vertebrate (Grzimek et al. 2004).

Solitary breeders, such as the jabiru stork, from monogamous pairs. Storks were once thought as a group to be monogamous, but this is only true of some species and to a limited extent. They may change mates after migrations and migrate without them. 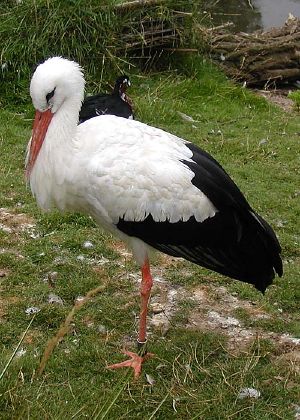 Taxonomists recognize 19 species of stork in six genera. Fossils of storks have been found in France traced to the Upper Eocene about 40 million years ago, and the group is considered to be distinct in the early part of the Tertiary 65 million years ago (Grzimek et al. 2004). Although placed taxonomically near other long-legged wading birds, such as herons, some consider the New World vultures to be their nearest relatives (Grzimek et al. 2004).

Though some storks are highly threatened, no species or subspecies are known to have gone extinct in historic times. A Ciconia bone found in a rock shelter on Réunion was probably of a bird taken there as food by early settlers; no known account mentions the presence of storks on the Mascarenes.

Storks have often been held in great affection by people (Grzimek et al. 2004) and have been important in human culture for many centuries. Many of the myths and symbolism is tied to the white stork. 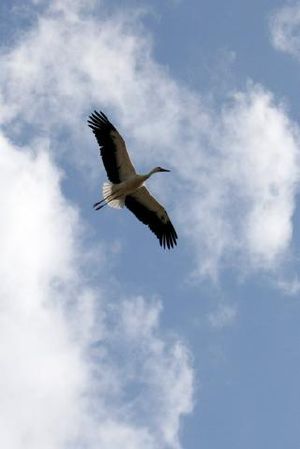 A white stork in flight in Spain. 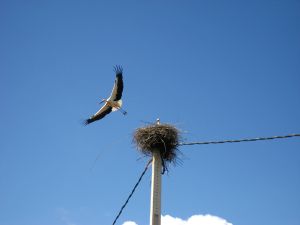 In Ancient Egypt, the stork was associated with the human ba; they had the same phonetic value (EO 2007). The ba was the unique individual character of each human being: a stork with a human head was an image of the ba—soul, which unerringly migrates home each night, like the stork, to be reunited with the body during the Afterlife (EO 2007).

The Hebrew word for stork was equivalent to "devotee; (literary) devout woman, God-fearing woman, religiously observant woman; righteous, pious, kind - woman ," and the care of storks for their young, in their highly visible nests, made the stork a widespread emblem of parental care. It was widely noted in ancient natural history that a stork pair will be consumed with the nest in a fire, rather than fly and abandon it.

The motto "Birds of a feather flock together" is appended to Aesop's fable of the farmer and the stork his net caught among the cranes that were robbing his fields of grain. The stork pleaded in vain to be spared, being no crane.

In Greek mythology, Gerana was an Æthiope, the enemy of Hera, who changed her into a stork, a punishment Hera also inflicted on Antigone, daughter of Laomedon of Troy (Ovid, Metamorphoses 6.93). Stork-Gerana tried to abduct her child, Mopsus. This accounted for, according to the Greeks, the mythic theme of the war between the pygmies and the storks.

In popular Western culture, there is a common image of a white stork bearing an infant wrapped in cloths held in its beak; the stork, rather than absconding with the child Mopsus, is pictured as delivering the infant, an image of childbirth. In Victorian times the details of human reproduction were difficult to approach, especially in reply to a child's query of "Where did I come from?"; "The stork brought you to us" was the tactic used to avoid discussion of sex. This habit was derived from the once popular view that storks were the harbingers of happiness and prosperity. When returning to the northern lands in spring, some storks habitually built their nest atop chimneys, bringing blessings to that family; the greatest blessing, of course, would be the expectation of a new baby.

The image of a stork bearing an infant wrapped in a sling held in its beak is common in popular culture. The small pink or reddish patches often found on a newborn child's eyelids, between the eyes, on the upper lip, and on the nape of the neck, which are clusters of developing veins that soon fade, are sometimes still called "stork bites."

The stork is alleged in folklore to be monogamous although in fact this monogamy may be in most cases "serial monogamy," the bond lasting one season. For early Christians the stork became an emblem of a highly respected "white marriage," that is, a chaste marriage. This symbolism endured to the seventeenth century, as in Henry Peacham's emblem book Minerva Britanna (1612).

For the Chinese, the stork was able to snatch up a worthy man, like the flute-player Lan Ts'ai Ho, and carry him to a blissful life.

In Norse mythology, Hoenir gives to mankind the spirit gift, the óðr that includes will and memory and makes us human. Hoenir's epithets langifótr "long-leg" and aurkonungr "mire-king" identify him possibly as a kind of stork. Such a Stork King figures in northern European myths and fables. However, it is possible that there is confusion here between the white stork and the more northerly-breeding common crane, which superficially resembles a stork but is completely unrelated.

In Bulgarian folklore, the stork is a symbol of the coming spring (as this is the time when the birds return to nest in Bulgaria after their winter migration) and in certain regions of Bulgaria it plays a central role in the custom of Martenitsa: when the first stork is sighted it is time to take off the red-and-white Martenitsa tokens, for spring is truly come.

In Estonian, stork is "toonekurg," which is derived from "toonela"(underworld in Estonian folklore) combined with "kurg"(crane). It may seem not to make sense to associate the now-common white stork with death, but at the times they were named, the now-rare black stork was probably the more common breed.

In Vietnam, stork symbolize the strenuousness of poor Vietnamese farmers and the diligence of Vietnamese women.