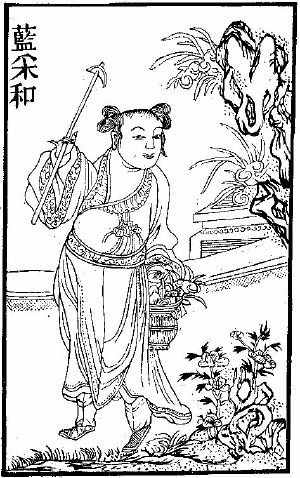 A woodcut of Lan Caihe.

Lan Caihe (藍采和) ("Lan Ts'ai-ho" in Wade-Giles) is the least well known of the Eight Immortal figures in Daoism. His/her age and sex are unknown, though he/she is generally thought to have lived during the Five Dynasties period (907-960 C.E.).[1] Lan Caihe is “sometimes regarded as a woman or even a hermaphrodite.”[2] In most illustrations, he is depicted as a young effeminate boy or youth carrying a bamboo flower basket or (less frequently) a flute and castanets.

In addition to his/her transgressive characterization, Lan Caihe's conduct was similarly uncouth (or even nonsensical). For example, he/she was famed for wearing only shorts and thin shirts in winter, and thick jacket and long pants in summer. Symbolizing this willfully incongruous conduct, he/she is often depicted walking about with one foot bare and the other shod.

Lan Caihe is one of the illustrious Eight Immortals (Ba Xian), a group of Daoist/folk deities who play an important role in Chinese religion and culture. While they are famed for espousing and teaching Daoist philosophy and cultivation practices, they are also figures of popular myth and legend that are known for their devotion to the downtrodden and their collective lifestyle of “free and easy wandering.” Though they are most often depicted and described in the context of their group, each has their own particular set of tales, iconography, and areas of patronage.

Unlike many of the Daoist Immortal figures, legendary accounts of the life and times of Lan Caihe are in rather short supply. This is likely due to his/her secondary status among the eight immortals (indeed he/she is rarely seen outside of the group context). Regardless, descriptions of his/her lifestyle and mode of existence are notably uniform.

Lan Caihe is consistently described as an eccentric (possibly insane) wanderer, traveling from town to town and making his/her living through song and dance. Though he/she accepted coins for his/her performances, he/she would often tie them to a string and drag them through the street, or would give them to the needy. If he/she needed to sleep, he/she would retire to a field or collapse in the middle of an inn; if hungry, he/she would earn enough for a meal (and a bottle or two of wine). In this way, he/she exemplified the lifestyle idealized by Zhuangzi—living at peace with oneself without any regard for earthly concerns and categories:

Life and death are great affairs, and yet they are no change to him. Though heaven and earth flop over and fall down, it is no loss to him. He sees clearly into what has no falsehood and does not shift with things. He takes it as fate that things should change, and he holds fast to the source.[3]

Likewise, all accounts describe Lan Caihe's songs (which "denounced this fleeting life and its elusive pleasures")[4] as potent sources of Daoist teachings. In one, he/she is reputed to have sung:

Ye men of the world!
Now are ye born, and soon ye die.
Yesterday, ye were twice eight,
And your valour puffed from your breast.
Today ye are as seventy years old,
Looking feebly and without strength.
Ye are like flowers of the spring day,
Which blossom in the morning, but fade in the evening.[5]

In this example, he/she stresses the typical Daoist positions on the necessity of worldly change, naturalness of age and death, and the futility of attachment to a particular corporeal reality.

Given his association with philosophical Daoist teachings and lifestyles, it is perhaps unsurprising that the tale of his/her ascension is less than detailed. In most accounts, Lan wakes up, sings for his dinner, and, having made a sufficient sum, retires to a nearby tavern to eat and drink. Suddenly, he hears the sound of a giant stork's wings as it settles upon his table. Realizing that his time in the world is nearing its conclusion, he/she leaps upon the bird's back and disappears into the sky. Intriguingly, this lack of detail seems oddly appropriate, as Lan Caihe's liminal status implies that he/she was never entirely "of this world" to begin with.[6]

Lan Caihe is variously portrayed as a youth, an aged man in a dress, or a girl (modern pictures often adopt the youthful female appearance). “He is represented in a blue gown, with one foot shod and the other bare, waving a wand as he/she wandered begging through the streets.”[7]

His/her distinctive emblem is either a flute and castanets or a flower-basket, often seen hanging from a hoe slung over his/her shoulder. The significance of the latter symbol is rather opaque—either he/she gathers flowers that specifically confer immortality or he/she just happens to enjoy collecting flowers.[8]

While Lan Caihe could be seen as the patron of actors, beggars and the mentally-ill, the connection is a rather weak one, as he/she is one of the least significant of the Eight Immortals (to the extent that he/she never receives attention outside of the context of the group).[9]

Retrieved from https://www.newworldencyclopedia.org/p/index.php?title=Lan_Caihe&oldid=686667
Categories:
Hidden category:
This page was last edited on 3 April 2008, at 22:18.
Content is available under Creative Commons Attribution/Share-Alike License; additional terms may apply. See Terms of Use for details.