Goose (plural geese) is the common name for any member of a variety of species of wild or domesticated large waterbirds in the family Anatidae, and especially the "true geese" in the subfamily Anserini comprising the three genera Anser ("grey geese"), Branta (black geese), or Chen (white geese, sometimes placed within Anser). The Anatidae family also includes swans, most of which are larger than geese and have a longer neck, and ducks, which are smaller than geese and have a more pointed bill. A number of other waterbirds have "goose" as part of their name. These are related mainly to the shelducks (family Anatidae, subfamily Tadorninae), but also include some birds, such as the magpie goose in the family Anseranatidae, that are not even members of Anatidae.

The term goose also refers only to the adult female, while gander is the name for the male, and a young male or female goose before fledging (growing flight feathers) is called a gosling.

In addition to their ecological value as part of the ecosystem, geese provide a number of values for human beings, including being a popular food delicacy and providing feathers for cushioning (pillows, mattresses) and insulation (jackets, sleeping bags, and quilts) Geese also provide aesthetic value, such as through the sight and sounds of migratory birds flying in a V-formation and the sight of male and female birds, paired for life, swimming with their offspring. 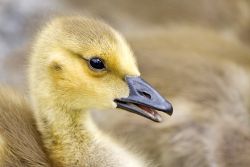 Goose in its origins is one of the oldest words of the Indo-European languages (Crystal 1998), the modern names deriving from the proto-Indo-European root, ghans, hence Sanskrit hamsa (feminine hamsii), Latin anser, Greek khén, and so forth.

In the Germanic languages, the root word led to Old English gos with the plural gés, German Gans and Old Norse gas. Other modern derivatives are Russian gus and Old Irish géiss; the family name of the cleric Jan Hus is derived from the Czech derivative husa.

The following are the living genera of true geese:

The following two genera are only tentatively placed in the Anserinae; they may belong to the shelducks or form a subfamily on their own:

True geese (tribe Anserini) are medium to large birds, always—with the exception of the Nēnē (Branta sandvicensis, "Hawaiian goose")—associated to a greater or lesser extent with water. The subfamily Anserinae (geese and swans) is mostly limited in its distribution to temperate and sub-arctic regions (Hutchins 2003). Some can be found at high elevations, such as the bar-headed goose (Anser indicus), which breeds on the highland plateaus of central Asia, between 4,000 and 5,000 meters in elevation (13,100 to 16,400 feet) (Hutchins 2003).

Males of all Anatidae, including the geese, have a copulatory organ that is evaginated from the cloaca for copulation (Hutchins 2003). Anatidae are remarkable for being one of the few families of birds that possess a penis. However, the sperm does not flow through a central canal, as in mammals, but rather along grooves on the outside (Hutchins 2003).

True geese are mostly herbivorous and feed by grazing. They also take invertebrates if the opportunity presents itself; domestic geese will try out most novel food items for edibility. All geese eat a largely vegetarian diet, and can become pests when flocks feed on arable crops or inhabit ponds or grassy areas in urban environments. Although geese largely require wetlands or water-bodies for survival, they feed mostly on land (Hutchins 2003).

Most species of geese in Europe, Asia, and North America are strongly migratory as wild birds, breeding in the far north and wintering much further south. The characteristic V formation of migrating geese is a conspicuous sight and the reasons for this formation remain debated, with the main two hypotheses being for saving energy and for communication and orientation of the flock (Andersson and Wallander 2004). Escapes and introductions have led to resident feral populations of several species.

A group of geese on the ground is called a gaggle; when flying in formation, it is called a wedge or a skein.

Geese have been domesticated for centuries. In the West, farmyard geese are descended from the greylag, but in Asia the swan goose has been farmed for at least as long.

Geese usually mate for life, and stay paired for several seasons, though a small number will "divorce" and remate. Geese tend to lay a smaller number of eggs than ducks (which mostly are only seasonally monogamous), but goslings usually have a higher survival rate than ducklings because unlike duck parents the goose parents are both involved in protecting the nest and the young. 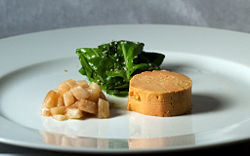 Geese provide several values for humans. For one, many geese serve as food items, being considered a delicacy in a number of cultures.

Foie gras (French for "fat liver") is the liver of a goose (or duck) that has been fattened through force-feeding. Foie gras is one of the most popular delicacies in French cuisine and its flavor is described as rich, buttery, and delicate, unlike that of a regular goose liver. The technique dates as far back as 2500 B.C.E., when the ancient Egyptians began keeping birds for food and fattening them by forcing them to eat more than they normally would. Although foie gras is produced and consumed worldwide, particularly in Europe and the United States, by far the largest producer and consumer of foie gras is France.

Another French delicacy, Confit d'oie, requires goose meat macerated in herbs and salt, cooked in savory broth or fat, and preserved in rendered fat. Such confits are a specialty of the southwest of France (Toulouse, Dordogne, etc.) and are used in refined versions of dishes such as cassoulet. Although confit of goose or duck are now considered somewhat luxurious products, these dishes were used by peasants as a means of storing meats for periods of time without refrigeration.

Hunting of geese has been popular historically and currently, and is a lucrative business.

Goose feathers, because they are soft, are used in pillows, blankets, and mattresses. They are also used as filling for winter clothing, such as quilted coats and sleeping bags, because of their insulation quality. Goose down especially has great loft, the ability to expand from a compressed, stored state to trap large amounts of compartmentalized, insulating air.

A number of birds belonging to the shelduck subfamily Tadorninae and living mainly in the Southern Hemisphere are also called "geese." These are:

A genus of prehistorically extinct seaducks, Chendytes, is sometimes called "diving-geese" due to their large size.

The spur-winged goose, Plectropterus gambensis, is most closely related to the shelducks, but distinct enough to warrant its own subfamily, the Plectropterinae.

The three perching ducks in the genus Nettapus are named "pygmy geese." One of those is the cotton pygmy goose, Nettapus javanica.

The unusual magpie goose is in a family of its own, the Anseranatidae.