Members of Anatidae are adapted for swimming, floating on the water surface, and in some cases diving in at least shallow water. They are generally herbivorous, and are monogamous breeders. Almost half of the species undertake annual migrations.

Members of Anatidae play an important ecological role as part of food chains, serving as food for a wide diversity of predators, such as birds of prey (hawks, eagles, falcons), mammals (foxes), reptiles (crocodilians), and even larger fish. Particularly the young are vulnerable, but adults of various species also may be attacked in water (such as by the muskellunge), in flight (such as by the Peregrine falcon), and on the nest (foxes, hawks, eagles).

A few species have been domesticated for agriculture, and many others are hunted for food and recreation. They also provide important economic value as the source of feathers and down for bedspreads, pillows, and so forth. Beyond this, they offer an aesthetic value for people, whether seen swimming on a lake, flying overhead during migration, or even walking through the woods and across roads with young ones.

Five species have become extinct since 1600, and many more are threatened with extinction.

The ducks, geese, and swans have a general body plan that is broad and elongated (Carboneras 1992). Diving species vary from this in being rounder. The wings are short and pointed, and supported by strong wing muscles that generate rapid beats in flight. They typically have long necks, although this varies in degree between species. The legs are short and strong and set far to the back of the body, more so in the more aquatic species. Combined with their body shape this can make some species awkward on land, but they are stronger walkers than other marine and water birds such as grebes or petrels.

The Anatidae are particularly distinguished from other groups of birds by the partially webbed feet and the somewhat flattened bills with horny lamellae. Most species have bills that are flattened to a greater or lesser extent and the bills of all species contain serrated lamellae, which are miniature ridges, like the 'teeth of a comb'. They act as a filter when feeding for organisms or plant matter. The lamellae are particularly well defined in the filter-feeding species. (Caroneras 1992). The bills also contain a hard "nail" or process at the tip (Tellkamp 2004). Geese that feed by grazing have strong bills, a wide "nail" at the tip to grasp vegetation, and a stout and flat lamellae (Tellkamp 2004). Ducks that strain food particles have blade-like lamellae, which are tightly packed in filtering specialists (Tellkamp 2004). Mergansers, which feed on fish, have serrated, backward pointing, almost tooth-like lamellae and a very narrow bill (Tellkamp 2004).

Members of the Anatidae also are characterized by a large preen gland that is crowned by a tuft of feathers (Tellkamp 2004). Males of this family also share a large external penis (Tellkamp 2004); Anatidae is one of the few families of birds that possess a penis (McCracken 2000).

The Anatidae are mostly medium to large-sized birds. The smallest members of the family are the cotton pygmy goose (Nettapus coromandelianus) with reaches up only to 26.5 centimeters (10.5 inches) and 164 grams (5.8 oz) and the African pygmy goose (Nettapus auritus), which reaches 33 centimeters (13 inches) and 230 grams (0.51 pounds). On the other hand, the trumpeter swan (Cygnus buccinator) reaches a body length of 1.8 meters (71 inches) and 13.5 kilograms (30 pounds). Some mute swans (Cygnus olor) may reach 22.5 kilograms (49.6 pounds) (Tellkamp 2004).

The Anatidae can range from inconspicuous and dull to spectacularly colorful (Tellkamp 2004). Their feathers are excellent at shedding water due to special oils. Many of the ducks display sexual dimorphism, with the males being more brightly colored than the females (although the situation is reversed in species like the paradise shelduck). The swans, geese, and whistling-ducks lack sexually dimorphic plumage.

Anatids are vocal birds, producing a range of quacks, honks, squeaks, and trumpeting sounds, depending on species; the female often has a deeper voice than the male (Todd 1991).

Tellkamp (2004) notes that about half of the species (47.6 percent) in Anatidae are either completely or partially migratory and the majority of the remaining species wander over wide areas. Some geese fly as high as 10,000 meters (32,800 feet) during migrations.

The anatids are generally seasonal and monogamous breeders. The level of monogamy varies within the family, many of the smaller ducks only maintain the bond for a single season and find a new partner the following year, whereas the larger swans, geese, and some of the more territorial ducks maintain pair bonds over a number of years.

Most species of Anmatidae are adapted for copulation on the water only. They construct simple nests from whatever material is close to hand, often lining them with a layer of down plucked from the mother's breast. In most species, only the female incubates the eggs. The young are precocial, and are able to feed themselves from birth (Todd 1991). One aberrant species, the black-headed duck, is an obligate brood parasite, laying its eggs in the nests of gulls and coots. While this species never raises its own young, a number of other ducks will occasionally lay eggs in the nests of conspecifics (members of the same species) in addition to raising their own broods.

Humans have had a long relationship with ducks, geese, and swans; they are important economically and culturally to humans. Duck, eider (large seaducks in the genus Somateria), and goose feathers and down (fine feathers found under the tougher exterior feathers) have long been popular for bedspreads, pillows, sleeping bags, and coats. The members of this family also have long been used for food and for sports hunting. On the flip side, some anatids are damaging agricultural pests, and have acted as vectors for zoonosis such as avian influenza.

Several duck species have benefited from an association with people. However, since 1600, five species of duck have become extinct, largely due to anthropogenic activities, and subfossil remains have suggested that humans caused numerous extinctions in prehistory. Today many more are considered threatened. Most of the historic and prehistoric extinctions were insular species, these species were vulnerable due to small populations (often endemic to a single island), and island tameness. Evolving on islands that lacked predators these species lost anti-predator behaviors as well as the ability to fly, and were vulnerable to human hunting pressure and introduced species. Other extinctions and declines are attributable to overhunting, habitat loss, and modification, as well as hybridization with introduced ducks (for example the introduced ruddy duck swamping genetically the white-headed duck in Europe). Numerous governments, and conservation and hunting organizations have made considerable progress in protecting ducks and duck populations through habitat protection and creation, laws and protection, and captive breeding programs.

While the status of the Anatidae as a family is straightforward, and there is little debate about which species properly belong to it, the relationships of the different tribes and subfamilies within it are poorly understood.

The systematics of the Anatinae remains in a state of flux. It had traditionally been divided into six subfamilies, but Livezey (1986) suggests that the Anatidae are better treated in nine subfamilies. This classification was popular in the late 1980s to 1990s (Madge and Burn 1987). But mtDNA sequence analyses (Sraml et al. 1996; Johnson and Sorenson 1999) indicate that, for example, the dabbling and diving ducks do not belong in the same subfamily. However, mtDNA is an unreliable source for phylogenetic information in many waterfowl (especially dabbling ducks) due to their ability to produce fertile hybrids (Carboneras 1992), in rare cases possibly even beyond the level of genus. Due to the small sample size of many molecular studies available to date, mtDNA results must be considered with caution.

Terres and NAS (1991) suggested that the Anatidae may be considered to consist of just 3 subfamilies (ducks, geese, and swans, essentially), which contain the groups as presented here as tribes, with the swans separated as subfamily Cygninae, the goose subfamily Anserinae also containing the whistling ducks, and the Anatinae containing all other clades (Terres and NAS 1991).

Tellkamp (2004) lists seven subfamilies: Anseranatinae (magpie goose), Anserinae (geese and swans), Antinae (wood ducks, dabbling ducks, pochards), Dendrocygninae (whistling-ducks), Merginae (sea ducks), Oxyurinae (stiff-tailed ducks), and Tadorninae (shelducks) (Tellkamp 2004). However, the magpie-goose is no longer considered to be part of the Anatidae, but is placed in its own family Anseranatidae.) 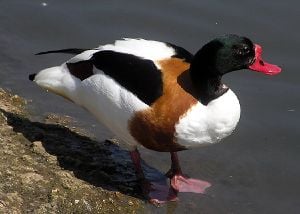 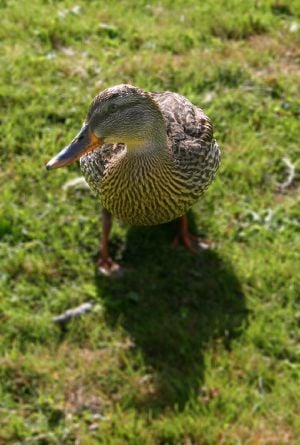 Species known from bones only

From subfossil bones found on Kauaʻi (Hawaiian Islands), two enigmatic waterfowl are known (Burney et al. 2001). The living and assignable prehistoric avifauna of the archipelago contains as Anseriformes Branta geese and their descendants, and the moa-nalos as mentioned above. The following taxa, although certainly new species, cannot be assigned even to subfamily; that Kauaʻi is the oldest of the large Hawaiian Islands, meaning the species may have been evolving in isolation for nearly up to 10 mya (since the Late Miocene), does not help in determining their affinities:

Similarly, Wetmore's goose (Geochen rhuax) from the Big Island of Hawaiʻi, and a gigantic goose-like anatid from Oʻahu are known only from very incomplete and in the former case much damaged bone fragments. The former has been alleged to be a shelduck (Short 1970), but this was generally dismissed because of the damage to the material and biogeographic considerations. The long-legged Kauaʻi bird, however, hints at the possibility of a former tadornine presence on the archipelago.

The fossil record of anatids is extensive, but many prehistoric genera cannot be unequivocally assigned to present-day subfamilies for the reasons given above. Some (such as Eonessa) seem to belong to subfamilies which are completely extinct. For prehistoric species of extant genera, see the respective genus accounts.

Putative or disputed prehistoric anatids are:

Retrieved from https://www.newworldencyclopedia.org/p/index.php?title=Anatidae&oldid=1094461
Categories:
Hidden category:
This page was last edited on 9 January 2023, at 01:03.
Content is available under Creative Commons Attribution/Share-Alike License; additional terms may apply. See Terms of Use for details.