Swan is any of various large, long-necked water birds of the family Anatidae, which also includes geese and ducks. Swans are grouped with the closely related geese in the subfamily Anserinae where swans form the tribe Cygnini. Sometimes, swans are considered a distinct subfamily, Cygninae while the Anserinae subfamily contains the geese (and also the whistling-ducks). There are six or seven extant species of "true swans" in the genus Cygnus (species).

The swan is one of the largest, fastest swimming, and fastest flying waterfowl, and one of the longest living birds in general. The swan, which lives up to 19 years in the wild, can live up to 50 years in captivity. It usually mates for life. Swans often are a symbol of love or fidelity because of their long-lasting monogamous relationships. The swan's graceful swimming has made it a symbol for beauty. Swans also are revered in many religions and cultures, especially Hinduism. (See Role in culture.)

Swans have webbed feet and a long, slender neck. The graceful, classically curved neck is typically of the black swan and the mute swan, while necks of other swans are straighter.

Swans tend to be very large as far as birds go. The trumpeter swan (Cygnus buccinator) is the largest native North American bird if measured in terms of weight and length, and is (on average) the largest waterfowl species on earth. Males typically measure from 145–163 centimeters (57–64 inches) and weigh 11.8 kilograms (26 pounds), while females typically range from 139–150 cm (55–60 inches) and weigh 10 kg (22 lb). It is rivaled in size among waterfowl only by the introduced mute swan (Cygnus olor), which is native to Eurasia, but the trumpeter usually is longer-bodied. Exceptionally large male trumpeters can reach a length of 183 cm (72 inches), a wingspan of 3 meters (almost 10 ft) and a weight of 17.4 kg (38 lb). The black-necked swan (Cygnus melancoryphus) of South America is the smallest member in its genus with adults averaging 4.7 kg (10.4 lbs), 114 cm (45 in) in length, and with a wingspan of about 177 cm (70 in).

The legs of swans are dark blackish gray, except for the two South American species, which have pink legs. Bill color varies; the four subarctic species have black bills with varying amounts of yellow, and all the others are patterned red and black. The mute swan and black-necked swan have a lump at the base of the bill on the upper mandible.

Swans tend to be among the fasting flying waterfowl, although speed tends to be hard to measure as it depends on such variable as whether there is a tailwind. For example, Ely et al. (1997) note a maximum flying speed of 135 k/hr for a tundra swan (Cygnus columbianus, also called Bewick's swan and whistling swan). Other note that these birds (which breed in the Arctic and can fly to 27,000 feet) average 30 mph, but have been clocked at 100 mph with a tailwind while flying in a V-formation. The top speed of a mute swan (Cygnus olor) has been claimed to be 50 to 55 mph (UMMZ).

Swans usually mate for life, though "divorce" does sometimes occur, particularly following nesting failure. The number of eggs in each clutch is between 3 and 8. 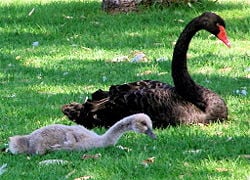 All evidence suggests that the genus Cygnus evolved in Europe or western Eurasia during the Miocene, spreading all over the Northern Hemisphere until the Pliocene. When the southern species branched off is not known. The mute swan apparently is closest to the Southern Hemisphere Cygnus; its habits of carrying the neck curved (not straight) and the wings fluffed (not flush) as well as its bill color and knob, indicate that its closest living relative is actually the black swan. Given the biogeography and appearance of the subgenus Olor it seems likely that these are of a more recent origin, as evidenced by their modern ranges (which were mostly uninhabitable during the last ice age) and great similarity between the taxa.

The fossil record of the genus Cygnus is quite impressive, although allocation to the subgenera is often tentative; as indicated above, at least the early forms probably belong to the C. olor-Southern Hemisphere lineage, whereas the Pleistocene taxa from North America would be placed in Olor. A number of prehistoric species have been described, mostly from the Northern Hemisphere. Among them was the giant Siculo-Maltese C. falconeri which was taller (though not heavier) than the contemporary local dwarf elephants (Elephas falconeri).

The supposed fossil swans "Cygnus" bilinicus and "Cygnus" herrenthalsi were, respectively, a stork and some large bird of unknown affinity (due to the bad state of preservation of the referred material).

The Coscoroba swan (Coscoroba coscoroba) from South America, the only species of its genus, is apparently not a true swan. Its phylogenetic position is not fully resolved; it is in some aspects more similar to geese and shelducks.

Many of the cultural aspects refer to the mute swan of Europe. Perhaps the best known story about a swan is The Ugly Duckling fable. The story centers around a duckling who is mistreated and looked down upon as an ugly, clumsy, larger duckling, until it becomes evident he is a swan and is accepted into the habitat. He was mistreated because real ducklings are, according to the story, more attractive than a cygnet, yet cygnets become swans, which are very attractive creatures. One interpretation is that this story deals with inner beauty over physical appearance. It is often used as a metaphor for something or someone mistreated or not appreciated at first or who feels out of place, but then having one's value recognized.

Swans are often a symbol of love or fidelity because of their long-lasting monogamous relationships. See the famous swan-related operas Lohengrin and Parsifal.

Swans are revered in many religions and cultures, especially Hinduism. The Sanskrit word for swan is hamsa or hansa, and it is the vehicle of many deities like the goddess Saraswati. It is mentioned several times in the Vedic literature, and persons who have attained great spiritual capabilities are sometimes called Paramahamsa ("Great Swan") on account of their spiritual grace and ability to travel between various spiritual worlds. In the Vedas, swans are said to reside in the summer on Lake Manasarovar and migrate to Indian lakes for the winter, eat pearls, and separate milk from water in a mixture of both.

Hindu iconography typically shows the mute swan. It is wrongly supposed by many historians that the word hamsa only refers to a goose, since today swans are no longer found in India, not even in most zoos. However, ornithological checklists clearly classify several species of swans as vagrant birds in India.

Swan maidens, shapeshifters who are able to transform from human to swan and vice versa, are a worldwide motif in folklore. The typical tale is of a swan maiden who is temporarily robbed of her powers and forced to marry a human man.

Swans feature strongly in mythology. In Greek mythology, the story of Leda and the Swan recounts that Helen of Troy was conceived in a union of Zeus disguised as a swan and Leda, Queen of Sparta.

The Irish legend of the Children of Lir is about a stepmother transforming her children into swans for 900 years. Myths also exist about swans themselves. It was once believed that upon death the otherwise silent mute swan would sing beautifully—hence the phrase swan song.

In Norse mythology, there are two swans that drink from the sacred Well of Urd in the realm of Asgard, home of the gods. According to the Prose Edda, the water of this well is so pure and holy that all things that touch it turn white, including this original pair of swans and all others descended from them. The poem Volundarkvida, or the Lay of Volund, part of the Poetic Edda, also features swan maidens.

In the Finnish epic Kalevala, a swan lives in the Tuoni river located in Tuonela, the underworld realm of the dead. According to the story, whoever killed a swan would perish as well. Jean Sibelius composed the Lemminkäinen Suite based on Kalevala, with the second piece entitled Swan of Tuonela (Tuonelan joutsen). Today five flying swans are the symbol of the Nordic Countries and the whooper swan (Cygnus cygnus) is the national bird of Finland.

In Latin American literature, the Nicaraguan poet Ruben Darío (1867-1916) consecrated the swan as a symbol of artistic inspiration by drawing attention to the constancy of swan imagery in Western culture, beginning with the rape of Leda and ending with Wagner's Lohengrin. Darío's most famous poem in this regard is Blasón, "Coat of Arms" (1896), and his use of the swan made it a symbol for the Modernismo poetic movement that dominated Spanish language poetry from the 1880s until the First World War. Such was the dominance of Modernismo in Spanish language poetry that the Mexican poet Enrique González Martínez attempted to announce the end of Modernismo with a sonnet provocatively entitled, Tuércele el cuello al cisne—"Wring the Swan's Neck" (1910).

One Chinese idiom about swans is how "a toad wants to eat swan flesh!". This idiom is used derisively on men who desire women who are beyond their station in terms of wealth, social class, or beauty.