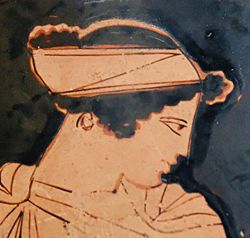 In Greek mythology, Helen (in Greek, Ἑλένη – Helénē), better known as Helen of Sparta or Helen of Troy, was daughter of Zeus and Leda, wife of king Menelaus of Sparta and sister of Castor, Polydeuces and Clytemnestra. Her abduction by Paris brought about the Trojan War. Helen was described by Christopher Marlowe as having "the face that launched a thousand ships."

In most sources, including the Iliad and the Odyssey, Helen is the daughter of Zeus and Leda.[1] Euripides' play Helen, written in the late fifth century B.C.E., is the earliest source to report the most familiar account of Helen's birth: that Zeus, in the form of a swan, was chased by an eagle, and sought refuge with Leda. The swan gained her affection, and the two mated. Leda then produced an egg, from which Helen was born.[2]

The Cypria, one of the Cyclic Epics, has another variant. Helen was the daughter of Zeus and the goddess Nemesis.[3] The date of the Cypria is uncertain, but it is generally thought to preserve traditions that date back to at least the seventh century B.C.E. In the Cypria, Nemesis did not wish to mate with Zeus. She therefore changed shape into various animals as she attempted to flee Zeus, finally becoming a goose. Zeus also transformed himself into a goose and mated with Nemesis, who produced an egg from which Helen was born.[4] Presumably in the Cypria this egg was given to Leda; in the fifth-century comedy Nemesis by Cratinus, Leda was told to sit on an egg so that it would hatch, and this is no doubt the egg produced by Nemesis.[5] Asclepiades and Pseudo-Eratosthenes related a similar story, except that Zeus and Nemesis became swans instead of geese.[6] Timothy Gantz has suggested that the tradition that Zeus came to Leda in the form of a swan derives from the version in which Zeus and Nemesis transformed into birds.[7]

Two Athenians, Theseus and Pirithous, pledged to wed daughters of Zeus. Theseus chose Helen, and Pirithous vowed to marry Persephone, the wife of Hades. Theseus and Pirithous kidnapped Helen and left her with Theseus' mother, Aethra, while they traveled to the underworld, the domain of Hades, to kidnap Persephone. Hades pretended to offer them hospitality and set a feast. As soon as the pair sat down, snakes coiled around their feet and held them there. Helen was subsequently rescued by her brothers, Castor and Pollux, who returned her to Sparta.[8]

In most accounts of this event, Helen was quite young; Hellanicus of Lesbos said she was seven years old and Diodorus makes her ten years old.[9] On the other hand, Stesichorus said that Iphigeneia was the daughter of Theseus and Helen, which obviously implies that Helen was of childbearing age.[10] In most sources, of course, Iphigeneia is the daughter of Agamemnon and Clytemnestra, but Duris of Samos and other writers followed Stesichorus' account.[11]

When it was time for Helen to marry, many kings and princes from around the world came to seek her hand or sent emissaries to do so on their behalf. Among the contenders were Odysseus, Menestheus, Ajax the Great, Patroclus, Idomeneus, Menelaus and Agamemnon, the latter two of whom were in exile, having fled Thyestes. All but Odysseus brought many rich gifts with them.

Her father, Tyndareus, would not choose a suitor, or send any of the suitors away, for fear of offending them and giving grounds for a quarrel. Odysseus promised to solve the problem if Tyndareus would support him in his courting of Penelope, the daughter of Icarius. Tyndareus readily agreed and Odysseus proposed that, before the decision was made, all the suitors should swear a most solemn oath to defend the chosen husband against whoever should quarrel with him. This stratagem succeeded and Helen and Menelaus were married. Following Tyndareus' death, Menelaus became king of Sparta because the only male heirs, Castor and Pollux, had died and ascended to Olympus. 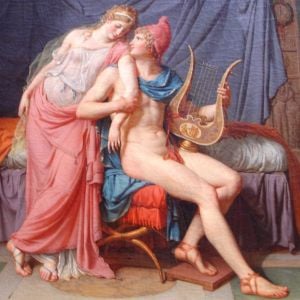 Helen and Paris, by Jacques-Louis David, 1788

Some years later, Paris, a Trojan prince, came to Sparta to marry Helen, whom he had been promised by Aphrodite after he had chosen her as the most beautiful of the goddesses, earning the wrath of Athena and Hera. Some sources say that Helen willingly left behind her husband Menelaus and Hermione, their nine-year-old daughter, to be with Paris, but, since Aphrodite promised Helen to Paris, there is some ambiguity about whether or not Helen went willingly. Some scholars have argued that Helen's abduction by Paris was in fact a rape (termed abduction as per the ancient understanding of raptus). Sources from Herodotus to material culture support this view. Ancient vases depict both the shameless Helen who went willingly to Troy and abduction stories in which Helen is taken by force.

Helen's relationship with Paris varies depending on the source of the story. In some, she loved him dearly (perhaps caused by Aphrodite, who had promised her to Paris). In others, she was portrayed as his unwilling captive in Troy, or as a cruel, selfish woman who brought disaster to everyone around her, and she hated him. In the version used by Euripides in his play Helen, Hermes fashioned a likeness of her out of clouds at Zeus's request, and Helen never even went to Troy, having spent the entire war in Egypt. 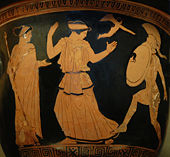 When he discovered that his wife was missing, Menelaus called upon all the other suitors to fulfill their oaths, thus beginning the Trojan War. Almost all of Greece took part, either attacking Troy with Menelaus or defending it from them.

Menelaus had demanded that only he should slay his unfaithful wife; but, when he raised his sword to do so, she dropped her robe from her shoulders, and the sight of her beauty caused him to let the sword drop from his hand.

Herodotus offers a differing account in which Helen never arrived in Troy. In that account Paris was forced to stop in Egypt on his way home. While there, his servants told the Egyptians that Paris had kidnapped the wife of Menelaus, who had offered Paris hospitality. The Egyptians scolded Paris and informed him that they were confiscating all the treasure he had stolen (including Helen) until Menelaus came to claim them and that Paris had three days to leave their shores.

Helen returned to Sparta and lived for a time with Menelaus, where she was encountered by Telemachus in The Odyssey. According to another version, used by Euripides in his play Orestes, Helen had long ago left the mortal world by then, having been taken up to Olympus almost immediately after Menelaus' return.

"The account of the Rhodians is different. They say that when Menelaus was dead, and Orestes still a wanderer, Helen was driven out by Nicostratus and Megapenthes and came to Rhodes, where she had a friend in Polyxo, the wife of Tlepolemus. For Polyxo, they say, was an Argive by descent, and when she was already married to Tlepolemus shared his flight to Rhodes. At the time she was queen of the island, having been left with an orphan boy. They say that this Polyxo desired to avenge the death of Tlepolemus on Helen, now that she had her in her power. So she sent against her when she was bathing handmaidens dressed up as Furies, who seized Helen and hanged her on a tree, and for this reason the Rhodians have a sanctuary of Helen of the Tree."

In Simonianism, it was taught that Helen of Troy was one of the incarnations of the Ennoia in human form.

Helen or Helene is probably derived from the Greek word meaning "torch" or "corposant" or might be related to "selene" meaning "moon".[12]

If it has an Indo-European etymology, it is possibly a suffixed form of a root *wel- "to turn, roll"[13] or "to cover, enclose" (compare Varuna, Veles), or of *sel- "to flow, run." The latter possibility would allow comparison to Vedic Saraṇyū, who is abducted in RV 10.17.2, a parallel suggestive of a Proto-Indo-Asian abduction myth.

The name is in any case unrelated to Hellenes, as is sometimes claimed ("Hellenes" being from the root *sed- "to sit, settle").

Several lists of her suitors were compiled, since the suitors of Helen were later the heroes of the Trojan War. This one is from Apollodorus:

This list is not complete; Apollodorus earlier mentions Cinyras king of Cyprus[15] and Enarophorus and later mentions Idomeneus king of Crete.[16] Another list was compiled by Hesiod and, later by Hyginus.