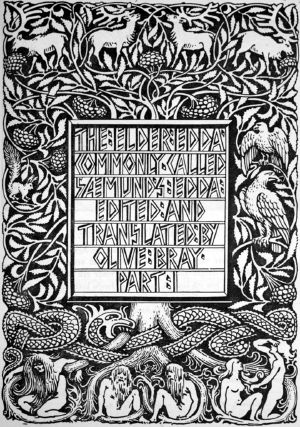 The title page of Olive Bray's English translation of the Poetic Edda depicting the tree Yggdrasil and a number of its inhabitants (1908) by W. G. Collingwood.

The Poetic Edda is a collection of Old Norse poems primarily preserved in the Icelandic mediaeval manuscript Codex Regius. Along with Snorri Sturluson's Prose Edda, the Poetic Edda is the most important extant source on Norse mythology and Germanic heroic legends, the pre-Christian legends and religious beliefs of the Scandinavian people and Northern Germanic tribes, which tend to reflect a focus on physical prowess and military might. They display none of the Christian virtues of redemption or forgiveness, but rather the harsh reality of deceit and retribution.

These myths were originally orally transmitted in the form of odes, sagas, and poetic epics. The Eddas and other medieval texts written down during and after the Christianization of the Norse peoples are written texts that give us knowledge of this oral tradition. The vast majority of written sources were assembled from accounts recorded in Iceland in the eleventh century C.E.

In Scandinavian folklore, Norse mythology has long held cultural currency, and some traditions have been maintained until the present day. This rich mythological tradition also remains as an inspiration in modern literature, as well as for other forms of artwork (including visual representations, films, comic books and stage productions).

Codex Regius was written in the thirteenth century, but nothing is known of its whereabouts until 1643, when it came into the possession of Brynjólfur Sveinsson, then Bishop of Skálholt. At that time versions of the Prose Edda were well known in Iceland but scholars speculated that there once was another Edda—an Elder Edda—which contained the pagan poems which Snorri quotes in his Prose Edda. When Codex Regius was discovered, it seemed that this speculation had proven correct. Brynjólfur attributed the manuscript to Sæmundr the Learned, a larger-than-life twelfth century Icelandic priest. While this attribution is rejected by modern scholars, the name Sæmundar Edda is still sometimes encountered.

Bishop Brynjólfur sent Codex Regius as a present to the Danish king, hence the name. For centuries it was stored in the Royal Library in Copenhagen but in 1971, it was returned to Iceland.

The Eddic poems are composed in alliterative verse. Most are in fornyrðislag, while málaháttr is a common variation. The rest, about a quarter, are composed in ljóðaháttr. The language of the poems is usually clear and relatively unadorned. While kennings are often employed they do not rise to the frequency or complexity found in skaldic poetry.

Like most early poetry the Eddic poems were minstrel poems, passing orally from singer to singer and from poet to poet for centuries. None of the poems are attributed to a particular author though many of them show strong individual characteristics and are likely to have been the work of individual poets. Scholars sometimes speculate on hypothetical authors but firm and accepted conclusions have never been reached.

The dating of the poems has been a lively source of scholarly argument for a long time. Firm conclusions are hard to reach. While lines from the Eddic poems sometimes appear in poems by known poets such evidence is difficult to evaluate. For example Eyvindr skáldaspillir, composing in the latter half of the tenth century, uses in his Hákonarmál a couple of lines also found in Hávamál. It is possible that he was quoting a known poem but it is also possible that Hávamál, or at least the strophe in question, is the younger derivative work.

The few demonstrably historical characters mentioned in the poems, like Attila, provide a terminus post quem of sorts. The dating of the manuscripts themselves provides a more useful terminus ante quem.

Individual poems have individual clues to their age. For example Atlamál hin groenlenzku is claimed by its title, and seems by some internal evidence, to have been composed in Greenland. If so, it can be no earlier than about 985 since there were no Scandinavians in Greenland until that time.

In some cases old poems can have been interpolated with younger verses or merged with other poems. For example stanzas 9-16 of Völuspá, the "Dvergatal" or "Catalogue of Dwarfs," is considered to be an interpolation.

The problem of dating the poems is linked with the problem of determining where they were composed. Since Iceland was not settled until about 870, anything composed before that time would necessarily have been elsewhere, most likely in Scandinavia. Any young poems, on the other hand, are likely Icelandic in origin.

Scholars have attempted to localize individual poems by studying the geography, flora and fauna refer to in the work. This approach usually does not yield firm results. While there are, for example, no wolves in Iceland, one can be sure that Icelandic poets were familiar with the species. Similarly the apocalyptic descriptions of Völuspá have been taken as evidence that the poet who composed it had seen a volcanic eruption in Iceland–but this is hardly certain.

Some poems similar to those found in Codex Regius are normally also included in editions of the Poetic Edda. Important manuscripts include AM 748 I 4to, Hauksbók and Flateyjarbók. Many of the poems are quoted in Snorri's Edda but usually only in bits and pieces. Poems included in an edition of the Poetic Edda depend on the editor. Those not in Codex Regius are sometimes called Eddica minora from their appearance in an edition with that title edited by Andreas Heusler and Wilhelm Ranisch in 1903.

English translators are not consistent in the translations of the names of the Eddic poems or the manner in which Old Norse forms are rendered in English. Up to three translations are given below, taken from the translations of Bellows, Hollander, and Larrington with proper names in the normalized English forms found in John Lindow's Norse Mythology and in Andy Orchard's Cassell's Dictionary of Norse Myth and Legend.

Not in Codex Regius

After the mythological poems Codex Regius continues with heroic lays about mortal heroes. The heroic lays are to be seen as a whole in the Edda, but they consist of three layers, the story of Helgi Hundingsbani, the story of the Nibelungs and the story of Jörmunrekkr, king of the Goths. These are, respectively, Scandinavian, German and Gothic in origin. Historically, Attila, Jörmunrekkr and Brynhildr actually existed, taking Brynhildr to be partly based on Brunhilda of Austrasia, but the chronology has been reversed in the poems.

Not in Codex Regius

Several of the legendary sagas contain poetry in the Eddic style. Its age and importance is often difficult to evaluate but Hervarar saga, in particular, contains interesting poetic interpolations.

This poem, also not in Codex Regius, is sometimes included in editions of the Poetic Edda even though it is Christian and belongs, properly speaking, to the visionary literature of the Middle Ages. It is, however, written in ljóðaháttr and uses some heathen imagery.

The two Eddas, the Prose Edda, or Younger Edda together with the Poetic, or Elder Edda, represent the best written sources for modern knowledge of the old Germanic mythology. The Poetic Edda's collection of heroic poems have been described as "dramatic dialogues in a terse, simple, archaic style that is in decided contrast to the artful poetry of the skalds."[1]

Retrieved from https://www.newworldencyclopedia.org/p/index.php?title=Poetic_Edda&oldid=1089066
Categories:
Hidden category:
This page was last edited on 24 November 2022, at 08:12.
Content is available under Creative Commons Attribution/Share-Alike License; additional terms may apply. See Terms of Use for details.