Pocket gopher is the common name for any of the herbivorous, burrowing rodents comprising the family Geomyidae, characterized by a tubular-shaped body, small eyes, reduced external ears, short limbs, and short and almost hairless tail. These are the "true" gophers, although several ground squirrels of the family Sciuridae are often called gophers as well. The many species of pocket gophers are found only in the Western Hemisphere, extending from Canada in North America to Colombia in South America.

The closest relatives of the pocket gophers are the members of the rodent family Heteromyidae, the pocket mice, kangaroo mice, and kangaroo rats. Members of both of these families are characterized by external, fur-lined cheek pouches for storing food, a trait unique from the internal pouches found in many rodents. This feature was used by evolutionist Stephen Jay Gould as support for the conjecture that evolutionary adaptations can come about suddenly rather than by a series of small steps, since it is hard to conceive of an intermediary with just a small crease having any adaptive advantage.

The extensive burrowing activity of pocket gophers moves a lot of soil, which frees up nutrients for plants and helps in plant distribution through movement of plant parts, such as tubers and roots. They are also important ecologically as part of food chains, being consumed by owls, snakes, and coyotes, among others. Native Americans also have used them as a food source and they are considered a delicacy in parts of Latin America. On the other hand, the herbivorous behavior of pocket gophers also has led to their damaging agricultural crops and trees, and they are widely considered agricultural pests. 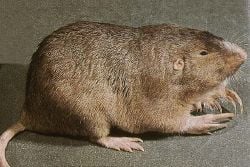 Pocket gophers have a heavily built, tube-shaped body, ranging from 5 to 11 inches (13-36 centimeters) and from about 0.13 to 3.1 pounds (0.06 to 1.4 kilograms) (Hafner 2004). Within any species, the males are larger than the females and can be nearly double their weight (MacDonald 2006). Adapted as burrowing animals living in subterranean tunnels, pocket gophers are characterized by small eyes, small external ears, many hairs around the eyes and ears that restrict the entry of soil, and very strong but short forelimbs that are used for digging (along, on occasion, with the incisors) (Hafner 2004). The hind limbs are also short. They have a short, almost hairless tail, which they use to feel around tunnels when they walk backwards.

Most gophers have short, brown fur that often closely matches the color of the soil excavated from where they live and helps camouflage it from predators as they move soil to the surface. Their most characteristic features are their large cheek pouches, from which the word "pocket" in their name derives. These external pouches are fur-lined, and can be turned inside out. They extend from the side of the mouth well back onto the shoulders. Used to hold food and nest material for transport (but not soil), these cheek pouches when full can make the head appear almost two times its natural size (Hafner 2004).

Located only in the Western Hemisphere, pocket gophers are widely distributed in western and central North America (including Canada, United States, and Mexico), extend into Central America and are located as far south as northwestern Colombia in South America (Hafner 2004). One species, Geomys pinetis, is found in southeastern United States, in Alabama, Georgia, and Florida.

Burrowing animals, pocket gophers are found in habitat with soil where they can create subterranean tunnels and that does not flood, including meadows, forests, deserts, and agricultural fields, including high-elevation habitats.

All pocket gophers are burrowers, that create complex networks of tunnels. They are larder hoarders (large hoards, found in a single place), and their cheek pouches are used for transporting food back to their burrows. Gophers can collect large hoards. Their presence is unambiguously announced by the appearance of mounds of fresh dirt about 8 inches (20 centimeters) in diameter. These mounds will often appear in vegetable gardens, lawns, or farms, as gophers like moist soil.

Pocket gophers are solitary outside of the breeding season, aggressively maintaining territories that vary in size depending on the resources available. Males and females may share some burrows and nesting chambers if their territories border each other, but in general, each pocket gopher is asocial and inhabits its own individual tunnel system. Pocket gophers can be found concentrated in some environments, with several hundred per acre (0.4 hectare), or in other places with fewer than 50 per acre (Hafner 2004).

Depending on the species and local conditions, pocket gophers may have a specific annual breeding season, or may breed repeatedly through the year. During breeding season, females will allow males to enter their burrows to mate. Each litter typically consists of two to five young, although this may be much higher in some species. The young are born blind and helpless, and are weaned at around forty days (Patton 1984). The young then establish their own burrows.

Pocket gophers are mainly crepuscular (active at dusk and dawn) and some are nocturnal. They do not hibernate (Hafner 2004).

Pocket gophers are solely herbivorous, feeding mainly on underground parts of plants, but occasionally plants near the entrances to their burrows. They create horizontal tunnels for feeding that are around the depth of the greatest root density (2 to 8 inches; 6 to 20 centimeters), but have nest areas and places to hoard food that may be several feet deep (Hafner 2004).

Although they will attempt to flee when threatened, they may attack other animals, including cats and humans, and can inflict serious bites with their long, sharp teeth.

There has been much debate among taxonomists about which races of pocket gopher should be recognized as full species, and the following list cannot be regarded as definitive.

Some sources also list a genus Hypogeomys, with one species, but this genus name is normally used for the Malagasy Giant Rat, which belongs to the family Nesomyidae.

The presence of external pouches in pocket gophers was offered by evolutionist Stephen Jay Gould as support for a possible punctuational origin of some new designs arising in evolutionary history, in contrast to a gradualist origin. According to the gradualist viewpoint, dubbed phyletic gradualism, the origin of novel features, such as the vertebrate eye, can be explained as having arisen from numerous, tiny, imperceptible steps, with each step being advantageous and developed by natural selection. For those cases where it is difficult to conceive how such structures could be useful in incipient stages, such as the development of a wing, the concept of "preadaptation" offers a popular resolution, proposing that the intermediate stage may perform useful functions different from the final stage. Incipient feathers may have been used for retaining body warmth or catching insects, for example, prior to the development of a fully functional wing.

However, Stephen Jay Gould (1980) cited the fur-lined pouches of pocket gophers as part of a critique that stated the full sequence of intermediate forms may not have existed at all, and instead key features may have developed by rapid transitions, discontinuously:

Many rodents have check pouches for storing food. These internal pouches connect to the pharynx and may have evolved gradually under selective pressure for holding more and more food in the mouth. But the Geomyidae (pocket gophers) and Heteromyidae (kangaroo rats and pocket mice) have invaginated their cheeks to form external fur-lined pouches with no connection to the mouth or pharynx. What good is an incipient groove or furrow on the outside? Did such hypothetical ancestors run about three-legged while holding a few scraps of food in an imperfect crease with their fourth leg?

Retrieved from https://www.newworldencyclopedia.org/p/index.php?title=Pocket_gopher&oldid=1022903
Categories:
Hidden category:
This page was last edited on 5 August 2019, at 19:47.
Content is available under Creative Commons Attribution/Share-Alike License; additional terms may apply. See Terms of Use for details.