Old World porcupine is the common name for any of the large, heavyset, terrestrial rodents comprising the family Hystricidae, characterized by short limbs, a tail less than half as long as the head and body, and a spiny covering of sharp quills, spines, and bristles that are not barbed, unlike the barbed quills of the New World porcupines of the Erethizontidae family. Old World porcupines range over the south of Europe, most of Africa, much of southern Asia including India, and the Malay Archipelago as far east as Borneo.

Although both the Old World and New World porcupine families belong to the Hystricognathi branch of the vast order Rodentia, and share a similar appearance with a large, heavyset body covered by quills, spines, or bristles, these families are quite different and are not closely related.

Old World porcupines provide a larger function for the ecosystem and for humans. Ecologically, despite the quills, they provide food for a number of predators, including large cats such as lions, hyenas, birds of prey, and pythons. For humans, they are hunted for their meat, which in some areas is considered a delicacy, and they also are sought for their quills for ornaments.

The common name porcupine is shared by the two taxonomic families of rodents: Hystricidae (Old World porcupines) and Erethizontidae (New World porcupines). Both have heavyset bodies covered with long quills or spines (modified hairs), which can detach easily from the skin when touched and become embedded in a potential predator. The quills or spines take on various forms, depending on the species, but all are modified hairs coated with thick plates of keratin, and are embedded in the skin musculature.

Old World porcupines are heavily-built animals, with blunt rounded heads, fleshy mobile snouts, and coats of thick cylindrical or flattened spines, which form the whole covering of their body, and are not intermingled with ordinary hairs. The tail is very short in some species but ranges up to half the head-body length in other species (Atkins 2004). Forelimbs and hindlimbs are short and each of the two forefeet have four well-developed clawed digits and one thumb, while both hindfeet have five functional digits (Atkins 2004). The soles of the feet are smooth, without hair, and with pads. Old World porcupines generally have relatively small eyes with relatively a poor sense of sight, and small external ears but with a good sense of hearing (Atkins 2004). They also have a sharp sense of smell, with nostrils that usually are S-shaped (Atkins 2004).

Like other rodents, they have powerful gnawing incisors, and no canine teeth. As with all rodents, the incisor teeth grow continuously throughout their lives and must be kept worn down by gnawing. Their dental formula is:

These rodents are also characterized by the imperfectly rooted cheek-teeth, imperfect clavicles or collar-bones, cleft upper lip, and six teats arranged on the side of the body.

The barb-less spines cover the head, body, and in some species the tail. They are stiff, thick, sharp, modified hairs, which may reach as much as 35 centimeters (13.8 inches) in length. There is a diversity of types of spines, from stiletto-like quills that are flattened with sharp points and longitudinal grooves; to sharp spikes that are thick and inflexible; to sharp bristle-like quills that are flexible towards the ends with a round cross section; to platelet, hollow bristles that are flattened; among others. Normally, quills point to the rear and lie flat, but when the animal is threatened or shows aggression, they can be instantly raised. Quills cannot be projected but are loosely attached and can penetrate flesh. They are not poisonous (Atkins 2004).

The habits of most species are strictly terrestrial, living on the ground and normally not climbing trees. They tend to be nocturnal and slow moving. They often used abandoned burrows of other animals or deep burrows that they excavate themselves being excellent diggers. They also may occupy hollow trees, rock crevices, caves, and holes dug by other animals (Atkins 2004).

The various species are typically herbivorous, eating fruit, roots, and bulbs. Many crops also are eaten, such as sweet potatoes, onions, potatoes, cucumbers, beans, bananas, peanuts, and grapes, and also feed on carrion (Atkins 2004). Some species gnaw on dry bones, perhaps for deficient minerals, such as a source of calcium. They often gnaw on tree bark, branches, and tree trunks, which aids their teeth wearing down properly.

One or two (or, rarely, three) young are born after a gestation period of between 90 and 112 days, depending on the species. Females typically give birth only once a year, in a grass-lined underground chamber within a burrow system. The young are born more or less fully developed, and the spines, which are initially soft, harden within a few hours of birth. Although they begin to take solid food within two weeks, they are not fully weaned until 13 to 19 weeks after birth. The young remain with the colony until they reach sexual maturity at around two years of age, and share the burrow system with their parents and siblings from other litters. Males, in particular, help defend the colony from intruders, although both sexes are aggressive towards unrelated porcupines (van Aarde 1984).

There are about 11 species of Old World porcupines, placed into three genera: Hystrix, Atherurus, and Trichys.

Of the three genera, Hystrix is characterized by an inflated skull, in which the nasal cavity is often considerably larger than the brain-case, and by a short tail, tipped with numerous slender-stalked open quills, which make a loud rattling noise whenever the animal moves.

The crested porcupine (Hystrix cristata) is a typical representative of the Old World porcupines, and occurs throughout the south of Europe and North and West Africa. It is replaced in South Africa by the cape porcupine, H. africaeaustralis, and in India by the Malayan Porcupine (H. leucura).

Besides these large crested species, there are several smaller species without crests in north-east India, and the Malay region from Nepal to Borneo. 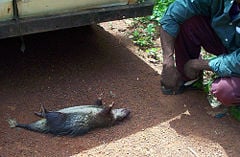 The genus Atherurus includes the brush-tailed porcupines, which are much smaller animals, with long tails tipped with bundles of flattened spines. Two species are found in the Malay region and one in Central and West Africa. The latter species, the African brush-tailed porcupine (Atherurus africanus), is often hunted for its meat.

Trichys, the last genus, contains one species, the long-tailed porcupine (Trichys fasciculata) of Borneo. This species is externally very similar to Atherurus, but differing from the members of that genus in many cranial characteristics.

Fossil species are also known from Africa and Eurasia, with one of the oldest being Sivacanthion from the Miocene of Pakistan. However, it was probably not a direct ancestor of modern porcupines (Savage and Long 1986).

The following is a complete list of extant species (Woods and Kilpatrick 2005) and fossil genera (McKenna and Bell 1997):

Retrieved from https://www.newworldencyclopedia.org/p/index.php?title=Old_World_porcupine&oldid=906976
Categories:
Hidden category:
This page was last edited on 20 January 2009, at 01:33.
Content is available under Creative Commons Attribution/Share-Alike License; additional terms may apply. See Terms of Use for details.