The sweet potato (Ipomoea batatas) is a member of the Convolvulaceae family of flowering plants, which includes the morning glory, chokeweed, and water spinach. The sweet potato has been cultivated for thousands of years for its tuberous roots. It is one of the most nutritious vegetables and is grown and eaten in many countries around the world. It is also used as animal feed and as the source of many other products.

The sweet potato is not closely related to the common potato, Solanum tuberosum. In the United States, it is sometimes confused with the yam (Dioscorea species) to which it is even less closely related.

Sweet potatoes offer both a physical value, and an inner or spiritual value for humans. Physically, they are one of the most nutritional vegetables available, and likewise are an important commercial crop. Beyond this, however, they also provide aesthetic value through the beauty of their flowers and the color and texture of their skin (which can be red, purple, brown, and white) and their flesh (which can range between white, yellow, orange, and purple). Likewise, the stimulating taste provides a joy beyond that of merely the nutrients received.

Sweet potato is sometimes spelled as one word, "sweetpotato."

The sweet potato is a herbaceous, perennial vine, bearing alternate heart-shaped or palmately lobed leaves and medium-sized sympetalous (fused petals) flowers. The edible tuberous root is long and tapered, with a smooth skin, whose color ranges between red, purple, brown, and white. Its flesh ranges between white, yellow, orange, and purple.

Sweet potatoes are native to the tropical Americas and were first cultivated there at least 5,000 years ago. They spread very early throughout the region, including the Caribbean and what is now the southeastern United States. They were brought to Europe by Spanish and Portuguese explorers and sweet potato cultivation quickly spread throughout much of the Old World.

When Europeans first visited Polynesia, they found sweet potatoes being grown. How and when they first got there is a subject of much debate among anthropologists and historians with some saying that this is evidence of early contact with the peoples of South America, and others that the sweet potatoes arrived there from the other direction after 1492 (CGIAR 2006). 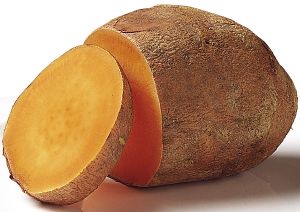 The sweet potato is one of the most nutritious vegetables. Although the leaves and shoots are also edible, the starchy tuberous roots are by far the most important product. In some tropical areas, they are a staple food-crop. Besides starch, they are rich in dietary fiber, vitamin A, vitamin C, and vitamin B6. All cultivars are more or less sweet flavored.

In a study by the Center for Science in the Public Interest, the nutritional value of sweet potatoes was compared to other vegetables. Considering fiber content, complex carbohydrates, protein, vitamins A and C, iron, and calcium, the sweet potato ranked highest in nutritional value, earning 184 points, 100 points over the next on the list, the common potato (NCSPC 2006). The Nutrition Action Health Letter similarly rated 58 vegetables according to vitamins A and C, folate, iron, copper, and calcium, plus fiber, and sweet potatoes topped the list with 582 points compared to 434 for its nearest competitor, a raw carrot (NCSPC 2006).

Sweet potato varieties with dark orange flesh are richer in vitamin A then light fleshed varieties and their increased cultivation is being encouraged in parts of Africa, where vitamin A deficiency is a serious health problem.

The roots are most frequently boiled, fried, or baked. They can also be processed to make starch and a partial flour substitute. Industrial uses include the production of starch and industrial alcohol. All parts of the plant are used for animal feed.

In the West Indies, the juice of red sweet potatoes is combined with lime juice to make a dye for cloth. By varying the proportions of the juices every shade from pink to purple to black can be obtained (Verrill 1937).

Sweet potatoes grow best where the summers are long and hot and there is plenty of rain. The plant does not tolerate frost. It grows best at an average temperature of 24°C (75°F). Depending on the cultivar and conditions, tuberous roots mature in 2 to 9 months. With care, early-maturing cultivars can be grown as an annual summer crop in temperate areas, such as the northern United States. They are mostly propagated by stem or root cuttings or by adventitious roots called "slips" that grow out from the tuberous roots during storage. True seeds are used for breeding only.

Under optimal conditions of 85 to 90 percent relative humidity at 13 to 16°C (55 to 61°F), sweet potatoes can keep for six months. Colder temperatures injure the roots.

Sweet potatoes are often considered a small farmer's crop. They grow well in many farming conditions and have few natural enemies; pesticides are rarely needed. They can be grown in poor soils with little fertilizer. Because they are sown by vine cuttings rather than seeds, sweet potatoes are relatively easy to plant. Because the rapidly growing vines shade out weeds, little weeding is needed, allowing farmers to devote time to other crops. In the tropics, the crop can be maintained in the ground and harvested as needed for market or home consumption. In temperate regions, sweet potatoes are most often grown on larger farms and are harvested before frosts set in (CGIAR 2006). 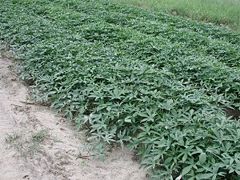 Sweet potatoes in the field.

China is the largest grower of sweet potatoes; providing about 80 percent of the world's supply, which totaled 130 million tons in 1990 (about half that of common potatoes). In the past, most of China's sweet potatoes were grown for food but now most (60 percent) are grown to feed pigs. The rest are grown for human food and for other products. Some are grown for export, mainly to Japan. China grows 100 varieties of sweet potato (JRT 2006).

Sweet potatoes became popular very early on in the islands of the Pacific, from Japan to Polynesia. One reason is that they were favored as an emergency crop that could be relied on if other crops failed, for instance because of typhoon flooding or tribal war. They are featured in many favorite dishes in Japan, Taiwan, and other island nations. The Solomon Islands in the South Pacific has the world's highest per capita consumption of sweet potatoes, 174 kg (380 lbs).

Indonesia, Vietnam, India, and some other Asian countries are also large sweet potato growers. Uganda (the third-largest grower after Indonesia), Rwanda, and some other African countries also grow a large crop, which is an important part of their peoples' diets. North and South America, the original home of the sweet potato, together grow less than 3 percent of the world's supply. Europe has a very small sweet potato production, mostly in Portugal (JRT 2000; FAO 1990).

Sweet potatoes were an important part of the diet in the United States for most of its history, especially in the southeast. In recent years, however, they have become less popular. The average per capita consumption of sweet potatoes in the United States is only about 1.5–2 kg (4 lbs) per year, down from 13 kg (31 lbs) in 1920. Southerner Kent Wrench writes: "The SweetPotato became associated with hard times in the minds of our ancestors and when they became affluent enough to change their menu, the potato was served less often"(NCSPC 2006). 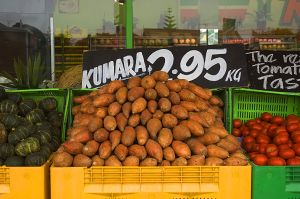 The English word potato is from the word batata (sweet potato) of the Taino Indians of the West Indies by way of the Spanish word patata. The English word originally referred to the sweet potato, but was later applied to the common potato, which is called papa in Spanish.

The word yam is probably from nyami in the language of the West African Wolof people. It is likely that when African people were brought to the New World as slaves that they used the word that they knew for the native sweet potato. Sweet potatoes are often called yams in the United States. Sometimes a distinction is made with the darker fleshed roots called "yams" and the lighter "sweet potatoes."

Another Spanish word for sweet potato is camote, which is sometimes used in the southwestern United States.

In New Zealand, sweet potatoes are called by their Maori name, kumara.