Python is the common name for any of the non-venomous constricting snakes comprising the Old World family Pythonidae, characterized by paired lungs, cloacal spurs, teeth on the premaxilla bone, and production of eggs rather than live birth. Found in Africa, Asia, Australia, and islands of the South Pacific, members of this family include some of the largest snakes in the world. There are about 32 species distributed among eight genera, including one genus with the name Python with seven species.

Pythons are similar to the anacondas comprising the genus Eunectes within the Boidae (boa) family of snakes. Both have two lungs and are constrictors that suffocate their prey by wrapping around it. However, in addition to various physical differences, pythons are found in the Old World and anacondas in the New World. However, pythons are similar enough to members of Boidae that some authorities actually place pythons as a subfamily, Pythoninae, within the boa family.

While pythons are feared for their ability to kill humans, and such behavior, while rare, is known, they also provide important functions for people. Historically, they have served as a source of food for indigenous peoples and their skins have been traded as a valued commodity, to be made into shoes or handbags. They have been used in traditional medicine and revered in some cultures, and captive breed pythons are used in a large market for pets. Ecologically, they help to control prey populations and small species and young are themselves preyed upon by various reptiles (monitor lizards, crocodiles), birds of prey, and mammals (felids). 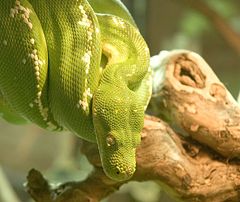 Pythons are similar in appearance and closely related to boas, the common name for snakes comprising the family Boidae. Both boas and pythons are considered to be primitive snakes, and both are constrictors. Both also have two fully functional lungs (most snakes have one lung) and have remnants of hind legs and pelvic bones (SDZ 2007). Pythons also share a cloacal spur, elliptical pupils, and pitted lip scales associated with thermoreception (Barker and Barker 2004). In some taxonomies, pythons are placed in the subfamily Pythoninae wihtin Boidae.

The Pythonidae are distinguished from the family Boidae by a number of physical characters. For one, most adult pythons have teeth on the premaxilla, a small bone at the very front and center of the upper jaw. The premaxilla of boas is without teeth. In addition, in pythons the prefrontal bone is in contact with the supraorbital bone, a small bone at the top of the eye socket; in boas, only one group has a supraorbital bone and it is not in contact with the prefrontal. Python labial pits also are located in the centers of the lip scales, but in those boas with labila pits they are located between the lip scales. Furthermore, while most boas produce live young, pythons produce eggs (Barker and Barker 2004).

Most python species have rows of heat-sensing organs between the sublabial scales: labial pits. Although not as well developed as the loreal pits of the subfamily Crotalinae (pitvipers), these organs enable the snakes to detect objects that are hotter than the surrounding environment, and enable hunting to take place in total darkness, such as inside caves.

Color patterns vary from striking to nondescript brown or green. It usually reflects appropriate camouflage for the native habitat. Even within a given species, there may be enormous differences in coloration and pattern in different parts of the geographic range. A color change as the snakes mature is common to most species (Barker and Barker 2004). Some species, such a Morelia oenpelliensis and Apodora papuana, have the ability to change color dramatically. Some display iridescent colors, such as the ringed python, Bothrochilus boa, and the white-lipped python, Leiopython albertisii (Barker and Barker 2004). 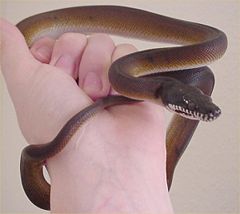 Pythons are found in sub-Saharan Africa, peninsular India, Myanmar, southern China, Southeast Asia, and from the Philippines southeast through Indonesia to New Guinea and Australia (McDiarmid 1999). Pythons inhabit a wide range of habitats, including wetlands, open forest, harsh desert, rainforest, rocky slopes, and savanna (Barker and Barker 2004). Water pythons (Liasis fuscus) are essentially aquatic for about six months of the year in the monsoon-flooded plains of northern Australia, while the green python (Morelia viridis) is adapted to an arboreal life in forests.

In the United States, a population of Burmese pythons, Python molurus bivittatus, has existed as an invasive species in the Everglades National Park since the late 1990s, which has damaged the local ecosystem. More than 300 have been removed. They are not native to the south Floridian marshlands, but have been deposited there by pet owners who no longer wished to care for them and also did not want to euthanize them. Scientists believe that the snakes are a grave threat to nearly every species of animal in the Everglades, including alligators. There have been several accounts of python versus alligator encounters there, including one in autumn 2005 between a 13-foot (4 m) python and a six-foot (1.8 m) alligator that proved fatal for both. The two were found with the alligator's body protruding from a tear in the snake's body (Lovgren 2004). 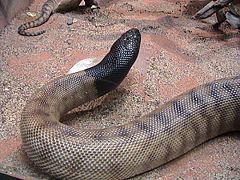 Most members of Pythonidae are ambush predators, in that they typically remain motionless in a camouflaged position and then strike suddenly at passing prey. Larger specimens usually eat animals about the size of a house cat, but larger food items are not unknown: some large Asian species have been known to take down adult deer, and the African rock python, Python sebae, has been known to eat gazelle. Prey is swallowed whole, and may take anywhere from several days or even weeks to fully digest.

Prey is killed by a process known as constriction; after an animal has been grasped to restrain it, a number of coils are hastily wrapped around it. Then, by applying and maintaining sufficient pressure to prevent it from inhaling, the prey eventually succumbs due to asphyxiation. Contrary to popular belief, even the larger species, such as the reticulated python, P. reticulatus, do not crush their prey to death; in fact, prey is not even noticeably deformed before it is swallowed. The speed with which the coils are applied is impressive and the force they exert may be significant, but death is caused by suffocation, with the victim not being able to move its ribs in order to breathe while it is being constricted (Mehrtens 1987; Stidworthy 1974; Carr 1963). It has recently been suggested that the pressures produced during constriction cause cardiac arrest by interfering with blood flow, but this hypothesis has not yet been confirmed.

Despite their intimidating size and muscular power, pythons generally are not dangerous to humans. They will generally not attack humans unless startled or provoked, although females protecting their eggs can be aggressive. Large adult specimens can kill people. Unsuspecting children can and have been preyed upon and swallowed whole after being suffocated. Reports of attacks on human beings were once more common in South and Southeast Asia, but are now quite rare.

Females lay eggs (oviparous). This sets them apart from the family Boidae (boas), most of which bear live young (ovoviviparous). After they lay their eggs, females will typically incubate them until they hatch. This is achieved by causing the muscles to "shiver," which raises the temperature of the body to a certain degree, and thus that of the eggs. Keeping the eggs at a constant temperature is essential for healthy embryo development. During the incubation period, females will not eat and only leave to bask in order to raise their body temperature.

*) Not including the nominate subspecies.
T) Type genus.[1]

Many species have been hunted aggressively, which has decimated some, such as the Indian python, Python molurus. All pythons are listed as Vulnerable by the IUCN and one subspecies of the Indian python (P. m. molurus) is listed as Endangered (Barker and Barker 2004).