Boa is the common name for any of the various non-venomous, constricting, typically live-bearing snakes comprising the family Boidae, characterized by stout bodies, two functional lungs, vestiges of hind limbs, and, unlike the similar but egg-laying pythons (family Pythonidae), lacking the postfrontal bones and premaxillary teeth. Well-known boas include the anacondas and boa constrictors.

The term boa also is used more specifically for any of "true boas" comprising the subfamily Boinae within Boidae, as well as the genus name, Boa, within the Boinae subfamily.

Found in both the Old World and New World, boas inhabit diverse terrestrial, semi-aquatic, and arboreal habitats. They are integral to food chains in their ecosystems, ambushing, constricting, and swallowing whole such prey as birds, amphibians, fish, reptiles (lizards, caimans), and mammals (rodents, bats, opossums, monkeys, capybaras, tapirs, and deer, etc.), and being preyed upon by jaguars, caimans, and birds of prey. For people, boas help to remove agricultural pests, are kept as pets, and add to the wonder of nature.

There are other snakes outside of the Boidae family that also have the common name of boa. These include any member of the Bolyeriidae, a small family of non-venomous snakes from Mauritius and nearby islands known as "Round Island boas," and any member of the Tropidophiidae, a family of non-venomous snakes found in Central America, South America, and the Caribbean and known as "dwarf boas." However, this article will be limited to discussion of members of Boidae.

The Boidae are a family of non-venomous snakes found in the Americas, Africa, Europe, Asia and some Pacific Islands. Relatively primitive snakes, adult boas (or boids) range in size from the small Arabian sand boa (Eryx jayakari) and elegant sand boa (Eryx elegans), both of which reach 40 centimeters (16 inches) in length, to the green anaconda (Eunectes murinus), which reaches up to nine meters (30 feet) (SDZ 2008). 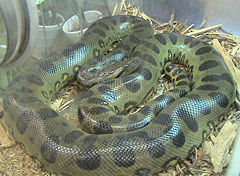 Boas are similar in appearance and closely related to pythons, the common name for a group of non-venomous constricting snakes comprising the family Pythonidae. Both boas and pythons are considered to be primitive snakes, and both are constrictors that suffocate their prey by wrapping around it. Both also have two lungs (most snakes have one lung) and have remnants of hind legs and pelvic bones (SDZ 2008). Both pythons and boids have elongated supratemporal bones. The quadrate bones are also elongated, but not as much, while both are capable of moving freely so that when they swing sideways to their maximum extent, the distance between the hinges of the lower jaw is greatly increased (Parker and Grandison 1977).

Pythons are distinguishable from boas in that pythons have teeth on the premaxilla, a small bone at the very front and center of the upper jaw. Boas also lack the postfrontal bones of the pythons. Furthermore, while most boas produce live young, pythons produce eggs. When labial pits are present in boas, these are located between the scales as opposed to on them. Also, their geographical distributions are almost entirely mutually exclusive. In the few areas that they do coexist, the tendency is for them to occupy different habitats (Parker and Grandison 1977).

However, pythons and boas are similar enough that some authorities actually place pythons as a subfamily (Pythoninae) within the boa family. Some species of sand boas are also called python.

Two subfamilies comprising eight genera and 43 species are currently recognized (ITIS 2004a). The two sufamilies are Boinae, or "true boas," and Erycinae, or "sand boas." The anacondas are placed within the subfamily Boinae. Compared to true boas, snakes of the subfamily Erycinae are quite small, with most members remaining well under a meter in length. In some taxonomies, the Old World sand boas, the Erycinae, are also frequently listed under their own family, the Erycidae.

Boas are found in a wide variety of habitats, including rainforests, grasslands, swamps, woodlands, and semidesert areas (SDZ 2008). Some are terrestrial, others arboreal, and some, like the anacondas, are semi-aquatic.

Prey is killed by a process known as constriction; after an animal has been grasped to restrain it, a number of coils are hastily wrapped around it. Then, by applying and maintaining sufficient pressure to prevent it from inhaling, the prey eventually succumbs due to asphyxiation. It has recently been suggested that the pressures produced during constriction cause cardiac arrest by interfering with blood flow, but this hypothesis has not yet been confirmed.

Larger specimens usually eat animals about the size of a house cat, but larger food items are not unknown: the diet of the common anaconda, Eunectes murinus, is known to include subadult tapirs. Prey is swallowed whole, and may take anywhere from several days or even weeks to fully digest. Despite their intimidating size and muscular power, they are generally not dangerous to humans.

Contrary to popular belief, even the larger species do not crush their prey to death; in fact, prey is not even noticeably deformed before it is swallowed. The speed with which the coils are applied is impressive and the force they exert may be significant, but death is caused by suffocation, with the victim not being able to move its ribs in order to breathe while it is being constricted (Mehrtens 1987; Stidworthy 1974; Carr 1963).

Most species are ovoviviparous, with females giving birth to live young. This is in contrast to the pythons, which all lay eggs (oviparous). The young are attached to a yolk sac but not surrounded by a shell, but rather a clear membrane, and develop inside the mother's body; at the time of birth, they are pushed out the cloaca (SDZ 2008). Upon birth, they still must break through the protective membrane (SDZ 2008).

The Boinae, or "true boas," are one of two subfamilies of non-venomous boas. They are found in Central and South America, Africa, Madagascar, Reunion Island, Mauritius, the Maluku Islands and New Guinea (McDiarmid et al. 1999). Five genera comprising 28 species are currently recognized (ITIS 2004b).

*) Not including the nominate subspecies.
T) Type genus.[2]

Some sources also include the genera Acrantophis and Sanzinia, which are synonymized here with the genus Boa.

Boa is a genus of non-venomous boas found in Mexico, Central and South America, Madagascar, and on Reunion Island. Four species are currently recognized (ITIS 2004b). The largest member of this group, B. c. constrictor, has been reported to grow to a maximum size of 5.5 meters (18 feet) in length, although some believe that particular specimen was misidentified. It has an interesting color pattern of brown and black with a red tail. Feeding on birds and small mammals, it does well in captivity, tames easily, and is a common sight in zoos and homes.

Although four species are currently placed in this genus, B. constrictor is not considered to be closely related to the other three. Consequently, the latter are often moved to other genera, particularly Acrantophis and Sanzinia. Nevertheless, all are commonly known as "boa constrictors." To add further to the naming confusion, the other species of snake in Boidae are known as "boas" and all are constrictors. More than a few subspecies of B. constrictor are recognized, several of which have distinct common names (Noonan and Chippindale 2006).

*) Not including the nominate subspecies.
T) Type species.[2]

Retrieved from https://www.newworldencyclopedia.org/p/index.php?title=Boa&oldid=1024960
Categories:
Hidden category:
This page was last edited on 18 September 2019, at 15:07.
Content is available under Creative Commons Attribution/Share-Alike License; additional terms may apply. See Terms of Use for details.