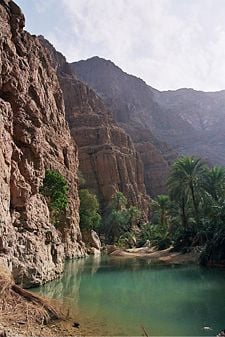 The Arabian Peninsula (Arabic: شبه الجزيرة العربية šabah al-jazīra al-ʻarabīyya or جزيرة العرب jazīrat al-ʻarb) is a peninsula in Southwest Asia at the junction of Africa and Asia consisting mainly of desert. The area is an important part of the Middle East and plays a critically important geopolitical role because of its vast reserves of oil and natural gas.

The coasts of the peninsula are, on the west the Red Sea and the Gulf of Aqaba, on the southeast the Arabian Sea (part of the Indian Ocean), and on the northeast, the Gulf of Oman, the Strait of Hormuz, and the Persian Gulf.

Its northern limit is defined by the Zagros collision zone, a mountainous uplift where a continental collision between the Arabian Plate and Asia is occurring. It merges with the Syrian Desert with no clear line of demarcation.

Geographically, the Arabian Peninsula includes parts of Iraq and Jordan. Politically, however, the peninsula is separated from the rest of Asia by the northern borders of Kuwait and Saudi Arabia. The following countries are politically considered part of the peninsula:

With the exception of Yemen, these countries (called the Arab Gulf states) are among the wealthiest in the world.

The climate of the Arabian Peninsula is extremely dry and arid. As is common in the neighboring area, the Arabian Peninsula receives very little annual rainfall. Compounding the lack of precipitation, the Arabian Peninsula also has few lakes or permanent rivers, two facts which combine to produce an extremely dry landscape that is not conducive to settled civilizations. The few rivers that do exist in the region, referred to as wadis, are only full during the wet seasons. During any other period of time the wadis are dry. The dry climate, combined with lack of available water, does not permit large scale agricultural development. The only place where cultivation can occur is near the oases, but these are very few locations within a desert so large. 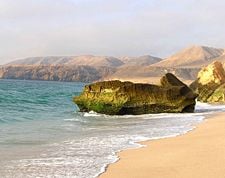 Some geologists claim that the Arabian Peninsula should be more accurately classified as a subcontinent, due to the fact that it is placed on a tectonic plate that is completely separate from any neighboring continents. To support this theory, the geologists claim that the tectonic plate the Arabian Peninsula is on is slowly moving away from the plate under northeast Africa. 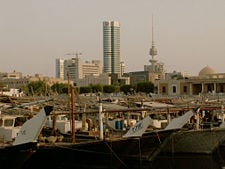 The primary exports of the Arabian Peninsula are oil and natural gas, both of which are found abundantly in the region. Because these commodities are desired by industrialized nations around the world, the Arabian Peninsula can use its natural resources as a means to direct political action. The ability to use oil as a political force is most apparent in the Organization of Petroleum Exporting Countries (OPEC) that unites all of the oil exporting countries in the region as a political unit. By consolidating the political power of all the oil exporting countries, OPEC is able to guide political action in the world through the threat of withholding oil resources. The influx of wealth from the oil industry also provides many of the necessary services for governments in the region, such as the funds for construction projects or the financial service sector. 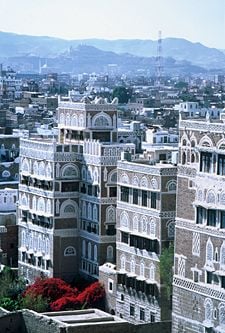 The old part of Sanaa, Yemen

The earliest civilizations in the Arabian Peninsula were formed in the wetter portions of the peninsula, lying in the extreme southwest corner. These early civilizations, the Minaean, the Sabaean, and the Himyarites, capitalized on the Arabian Peninsula's unique geographic position to become major players in international commerce. It is thought by some historians that the Queen of Sheba, mentioned in the Bible, was actually the ruler of the Sabeans during the height of their power. The rise of these kingdoms was facilitated by the abundance of frankincense and myrrh in the area, which fetched a high price on the market. Control of these, and other, spices quickly became a point of contention in the ancient world, leading the prefect of Egypt to launch a military attack to gain control of the trade. The attack failed, and the Himyarites continued to dominate trade in the area until the Romans created trade routes towards the Red Sea. The Persian Gulf was also a vitally important water route to ancient world trade, as sailors could travel along the gulf without ever losing sight of land.[2]

The power of the Himyarites began to falter in the early third century, when rival economic power Aksum attempted to assert political control over the fledging Arabian Peninsula empires. The East African Kingdom of Aksum was particularly interested in territorial expansion, and in their attempt to expand, their desires overlapped with the territory of the Himyarites. At its strongest, the kingdom of Aksum extended into Yemen and western Saudi Arabia, both countries which are commonly included in the definition of the Arabian Peninsula.

Culturally, the Arabian Peninsula is considered to be the homeland of the Proto-Semitic language family. This language family is thought by many linguists to be the original language of the majority of people in the region including: Akkadians, Arabs, Assyrians, and Hebrews. According to this theory, the Arabian Peninsula was the birth place of most Middle Eastern languages. It is also in this region that a few speakers of rare Southern East Semitic languages can be found, and not anywhere else in the world. Most of the population adheres to the tenets of Islam, and are guided by religious law in their everyday lives. This fact is particularly notable in Saudi Arabia and Yemen, which boast higher population levels that other countries in the region. The religious life of the Arabian Peninsula is concentrated in Mecca and Medina, both vitally important cities to the followers of Islam.