Natural resource is any naturally occurring substance or feature of the environment (physical or biological) that, while not created by human effort, can be exploited by humans to satisfy their needs or wants. There are different schools of thought on whether economic value is a necessary condition for something to be classified as a natural resource, a distinction that can have legal 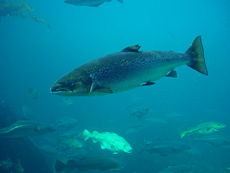 ramifications (See definition.) Examples of natural resources include fossil fuels (crude oil, coal, etc.), minerals (diamonds, copper, etc.), salmon, and timber. Trees in a park that provide aesthetic beauty can be considered natural resources among those who do not limit the term to the presence of economic product value.

Some natural resources, such as oil and natural gas reserves, may be associated with particular properties. Other resources, such as whales, migratory birds or fish, or clean air are not fixed to particular properties. According to economic theory, the private ownership of natural resources tends to produce more efficient extraction and consumption because of the profit motive, which leads to realistic pricing and careful management. On the other hand, when natural resources are not privately owned, there is a greater tendency for their being over-exploited, as individual parties compete for them. This overuse, sometimes to the point of destruction, has been termed the “tragedy of the commons.” However, in both cases, there is danger of inefficiency and over-harvesting of the natural resources when individual parties, in their exploitation or use of the natural resources, fail to consider the broader needs of others in society or the needs of future generations.

A well-known paradox is the fact that abundant natural resources, under some defined circumstances, may actually correlate with poor state development, such as seen in the Democratic Republic of Congo or Nigeria. This is known as the ”resource curse.” 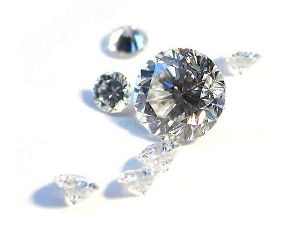 Diamonds are naturally existing and serve a human want: a natural resource

There are two basic conditions for a substance or feature to be classified as a natural resource. First, the resource must exist naturally in the environment; that is, not synthetically produced by human beings, such as in a laboratory or factory. Crude oil, timber, deer, and sailfish fit that requirement, whereas genetically engineered bacteria or computers do not. A naturally occurring commodity typically is classified as a natural resource when it is extracted or purified from its natural state rather than being created. Second, the resource must be able to be exploited by humans to directly satisfy a need or want. Copper, tuna, and air fulfill such a requirement (with air supplying a need, as a condition for life), whereas an infectious parasite or mosquito does not (although the parasite or mosquito may provide an indirect benefit as part of nature, such as part of food chains). Some authorities hold that for a substance or feature to be classified as a natural resource, it must offer potential or actual economic value, creating wealth. This was an original definition provided in the 6th edition of Black's Law Dictionary (1990): "“any material in its native state which when extracted has economic value." Others do not limit the term to those resources having economic product value, but also include supplying a non-economic value. Resources such as oil, coal, wood, water power, and arable land clearly can be seen as providing potential economic value. These are considered natural resources by all parties. The second, broader concept also includes such features as climate and trees planted in a park. While not considered to have any direct economic value, they do provide important non-economic values. A climate may be seen as part of one’s enjoyment of nature and tourism, while trees in a park provide aesthetic values.

This distinction is reflected in the two divergent definitions of natural resource found in the 7th edition of Black’s Law Dictionary (1999): (1) “any material from nature having potential economic value or providing for the sustenance of life; and (2) Environmental features that serve a community’s well-being or recreational interests, such as parks.”

It is a distinction that has important legal ramifications. For example, in a legal case considering the trees and wildlife on Fairfield University in Connecticut (USA), an Appellate Court held that natural resources must have economic value (citing the definition given in the 1990 version of Black's Law Dictionary) (Frisman 2003). However, this decision was subsequently overturned by the Connecticut Supreme Court, which stated "the view that the term natural resources is confined to the limited economic product value standard is nowhere expressed in our legislative history. To the contrary, the legislative history of the act is antithetical to that conclusion" (Frisman 2003). Judge Barry Schaller, a dissenting view on the Appellate Court decision, also advanced this view in embracing a broader view of natural resources as "a complex of interrelated elements existing in a state of ecological balance, which must be preserved for life to survive on the planet" (Frisman 2003). As an example, one can note that the loss of wetlands can greatly impact the quality of life on the planet, yet have historically been drained or otherwise destroyed in order to use the land for more economically viable uses, such as residential, commercial, or agricultural uses. 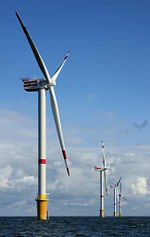 The natural resource of wind powers these 5MW wind turbines on this wind farm 28 km off the coast of Belgium.

Examples of resources supplied by nature:

Natural resources can be classified according to several methods.

Renewable resources can further be sub-divided into two additional categories: 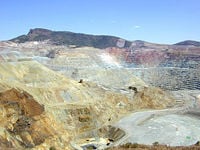 The "resource curse" is an observation that countries with an abundance of point-source, non-renewable natural resources (such as oil and minerals), and that have a high level of export dependence on such resources, tend to have poorer economic performances (less economic growth) and worse development outcomes (undemocratic, corrupt, and/or ineffective governance) than states that have fewer natural resources.

For example, 18 of the 20th largest oil exporters in 2000 had undemocratic governments, and many oil-exporting countries were highly indebted. Nigeria is rich in oil but is among the poorest states. The Democratic Republic of Congo is rich in many minerals, such as tin, copper, cadmium, diamonds, and gold and yet is poor and with many governance issues.

The proposed causes for such a phenomena are many. Conflict over resources (separatist and inter-governmental conflicts), revenue volatility (fluctuating prices), lack of government incentive to build up infrastructure, and lack of economic and human resource diversification (because of dependence of natural resources due to their high profitability) are some of the explanations. In addition, when the government does not have to rely on taxes for revenue, then the citizens have less incentive to demand efficient, responsive government than the highly taxed citizens of other countries, who are strongly motivated to be watchful of how the government spends its money. Money from sales of natural resources also provide rulers with the means to control the armed forces and buy favors. Governments may also borrow based on the resource potential, and can fall into debt when the price of the commodity drops.

In addition to these causes that are internal to the nation, there also are external factors involving foreign powers (governments, individuals, or corporations) exploiting the resources. For example, King Leopold II of Belgium looted the region of the present-day Democratic Republic of Congo for its rubber, enslaving, maiming, and killing much of the native population in the process.

This article began as an original work prepared for New World Encyclopedia by Dr. Frederick Swarts and is provided to the public according to the terms of the New World Encyclopedia:Creative Commons CC-by-sa 3.0 License (CC-by-sa), which may be used and disseminated with proper attribution. Any changes made to the original text since then create a derivative work which is also CC-by-sa licensed. To cite this article click here for a list of acceptable citing formats.

Note: Some restrictions may apply to use of individual images which are separately licensed.
Retrieved from https://www.newworldencyclopedia.org/p/index.php?title=Natural_resource&oldid=970896
Categories:
Content is available under Creative Commons Attribution/Share-Alike License; additional terms may apply. See Terms of Use for details.