Leopold II of the Belgians (April 9, 1835 – December 17, 1909) succeeded his father, Leopold I of Belgium, the first king of the independent Belgium, to the Belgian throne in 1865 and remained king until his death. He was the brother of Charlotte, Empress of Mexico and cousin to Queen Victoria. Outside of Belgium, he is chiefly remembered as the founder and sole owner of the Congo Free State, a private project undertaken by the king to extract rubber and ivory, which relied on forced labor.

As a small and recently independent European state (1830), Belgium did not possess numerous overseas colonies, unlike its neighbors, Holland and France as well as Great Britain, but shared their and Germany's imperial ambitions. Leopold's personal willpower was so strong that he was responsible for orchestrating the Berlin Conference of 1884-85 which would give him personal possession of the Congo. This Scramble for Africa was a complex mix of economic necessity for resources, the lure of empire and racist attitudes of superiority that assumed Africans were further down the ladder of social evolution and required guidance and supervision until they matured enough to govern themselves, if they were indeed capable of this.

Leopold II took imperialism, however, to a new level. Countries such as France, the Netherlands and Great Britain that acquired large empires exploited both land and people. However, because Parliament controlled their imperial polices, some measures to protect the rights of overseas subjects were introduced. Talk at home about the rights of women and men to vote, for protection against industrial exploitation saw legislation on working hours, child labor and employment conditions introduced and some were aware that those for whom the government was responsible overseas also possessed rights. Leopold II, however, simply saw the Congo as his to exploit and his rule was brutal. When the Belgium government assumed responsibility in 1909, the condition of the people changed dramatically and economic prosperity followed.

Leopold II was also the father of two sons, Lucien Philippe Marie Antoine (1906-1984) and Philippe Henri Marie François (1907-1914), born out of wedlock. Their mother was Blanche Zélia Joséphine Delacroix (1883-1948), aka Caroline Lacroix, a prostitute who married the king on December 12, 1909, in a religious ceremony with no validity under Belgian law, at the Pavilion of Palms, Château de Laeken, five days before his death. These sons were adopted in 1910 by Lacroix's second husband, Antoine Durrieux. Though Lacroix is said to have been created Baroness de Vaughan, Lucien the Duke of Tervuren, and Philippe the Count of Ravenstein, no such royal decrees were ever issued.

On November 15, 1902, Italian anarchist Gennaro Rubino unsuccessfully attempted to assassinate King Leopold. Leopold was riding in a royal cortege from a ceremony in memory of his recently-deceased wife, Marie Henriette. After Leopold's carriage passed, Rubino fired three shots at the King. Rubino's shots missed Leopold entirely and Rubino was immediately arrested at the scene.

In Belgian domestic politics, Leopold emphasized military defense as the basis of neutrality, but he was unable to obtain a universal conscription law until on his death bed. He died on December 17, 1909, and was interred in the royal vault at the Church of Our Lady, Laeken Cemetery, Brussels, Belgium. 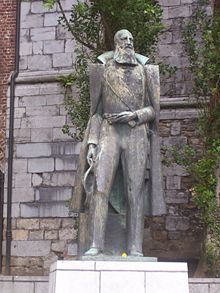 A statue of Leopold in Mons, Belgium

Leopold fervently believed that overseas colonies were the key to a country's greatness, and he worked tirelessly to acquire colonial territory for Belgium. Neither the Belgian people nor the Belgian government was interested, however, and Leopold eventually began trying to acquire a colony in his private capacity as an ordinary citizen.

After a number of unsuccessful schemes for colonies in Africa or Asia, in 1876 he organized a private holding company disguised as an international scientific and philanthropic association, which he called the International African Society.

In 1876, under the auspices of the holding company, he hired the famous explorer Henry Morton Stanley to establish a colony in the Congo region. Much diplomatic maneuvering resulted in the Berlin Conference of 1884-85, at which representatives of 13 European countries and the United States recognized Leopold as sovereign of most of the area he and Stanley had laid claim to. On February 5, 1885, the result was the Congo Free State (later the Belgian Congo, then the Democratic Republic of Congo, then Zaire, and now the Democratic Republic of Congo again), an area 76 times larger than Belgium, which Leopold was free to rule as a personal domain through his private army, the Force Publique.

Reports of outrageous exploitation and widespread human rights abuses (including enslavement and mutilation of the native population), especially in the rubber industry, led to an international protest movement in the early 1900s. Forced labor was extorted from the natives. Estimates of the death toll range from two to 15 million.[1] and many historians consider the atrocities to have constituted a genocide.

Finally, in 1908, the Belgian parliament compelled the king to cede the Congo Free State to Belgium. Historians of the period tend to take a very dim view of Leopold, due to the mass killings and human rights abuses that took place in the Congo; one British historian has said that he "was an Attila in modern dress, and it would have been better for the world if he had never been born." Emperor Franz Joseph of Austria-Hungary once described his fellow ruler as a "thoroughly bad man."

Missionary John Harris of Baringa, for example, was so shocked by what he had come across that he felt moved to write a letter to Leopold's chief agent in the Congo:

"I have just returned from a journey inland to the village of Insongo Mboyo. The abject misery and utter abandon is positively indescribable. I was so moved, Your Excellency, by the people's stories that I took the liberty of promising them that in future you will only kill them for crimes they commit."

Leopold II is still a controversial figure in the Democratic Republic of Congo; in 2005 his statue was taken down just hours after it was re-erected in the capital, Kinshasa. The Congolese culture minister, Christoph Muzungu, decided to reinstate the statue, arguing people should see the positive aspects of the king as well as the negative. But just hours after the six-meter (20-foot) statue was erected in the middle of a roundabout near Kinshasa's central station, it was taken down again, without explanation.

Leopold and the Belgians 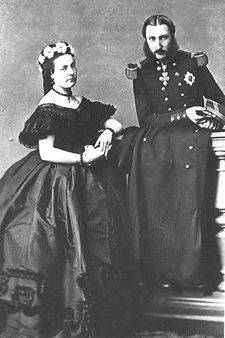 Though extremely disliked by Belgians at end of his reign—he was booed during his burial parade—Leopold II is perceived today by many Belgians as the "King-Builder" ("le Roi-Bâtisseur" in French, "Koning-Bouwer" in Dutch) because he commissioned a great number of buildings and urban projects in Belgium (mainly in Brussels, Ostend and Antwerp).

These buildings include the Royal Glasshouses at Laeken (in the domain of the Royal Palace of Laeken), the Japanese Tower, the Chinese Pavilion, the Musée du Congo (now called the Royal Museum for Central Africa) and their surrounding park in Tervuren, the Cinquantenaire in Brussels and the Antwerp train station hall. He also built an important country estate in Saint-Jean-Cap-Ferrat on the French Riviera in France, including the Villa des Cèdres, which is now a botanical garden. These were all built using the profits from the Congo.

There has been a "Great Forgetting," as Adam Hochschild puts it in King Leopold's Ghost, after Leopold's Congo was transferred to Belgium. In Hochschild's words:

Remarkably, the colonial Royal Museum for Central Africa (Tervuren Museum) did not mention anything at all regarding the atrocities committed in the Congo Free State. The Tervuren Museum has a large collection of colonial objects but of the largest injustice in Congo, "there is no sign whatsoever" (in Hochschild's words again). Another example is to be found on the sea walk of Blankenberge, a popular coastal resort, where a monument shows a colonialist with a black child at his feet (supposedly bringing "civilisation") without any comment, further illustrating this "Great Forgetting.

Many prominent writers of the time took part in international condemnation of Leopold II's exploitation of the Congo, including Arthur Conan Doyle, Booker T. Washington, and those mentioned below.