Leopold I of Belgium 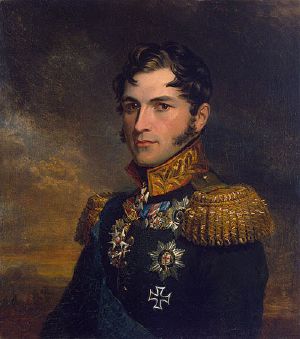 Leopold I of Belgium.

Leopold I (Leopold George Christian Frederick (in German Leopold Georg Christian Friedrich) Prince of Saxe-Coburg-Saalfeld, later Prince of Saxe-Coburg and Gotha, Duke of Saxony) (December 16, 1790 – December 10, 1865) was from July 21, 1831 the first King of the Belgians. He was the founder of the Belgian line of the House of Saxe-Coburg-Gotha. His children included Leopold II of Belgium and Empress Carlota of Mexico. He was born in Coburg and died in Laeken. He was responsible for building the first railway in Europe. He also tried to introduce laws restricting child labor, although he was not successful. During the period of instability in Europe following the 1848 change in France's government, he managed to keep Belgium free from the revolutions that spread across the continent. Belgium pioneered the Industrial Revolution on continental Europe, developing a flourishing mining and steel industry.

Leopold ruled as a constitutional monarch. His steady hand allowed Belgium, although small geographically, to become a stable and economically prosperous state. Under Leopold II his son and successor, Belgium contributed to the European exploration of Africa. The Berlin Conference of 1884-85 that launched the Scramble for Africa gave Leopold II the Congo as his personal territory. Leopold I kept his country neutral during conflicts, a tradition that continued through two world wars. Britain's entry into World War I was to honor the 1839 Treaty of London, signed by Leopold I. As a nation, Belgium has tried to avoid war, strongly supporting the founding of the post World War II European institutions that aim to make war unthinkable and materially impossible, and participating in United Nations peacekeeping missions. Leopold's choice of neutrality was pragmatic rather than the result of pacifist conviction but increasingly his people have taken the view that war is rarely justified and can be avoided when nations cooperate to resolve disputes non-violently and to make the world a fairer, juster more sustainable habitat for all people.

He was the youngest son of Franz Frederick Anton, Duke of Saxe-Coburg-Saalfeld and Countess Augusta Reuss-Ebersdorf, and later became a prince of Saxe-Coburg and Gotha after the territorial swap by his father of Ehrenburg Castle in the Bavarian town of Coburg. He was also an uncle of Queen Victoria of the United Kingdom.

In 1795, as a mere child, Leopold was appointed colonel of the Izmaylovsky Imperial Regiment in Russia. Seven years later he became a major general. When Napoleonic troops occupied the Duchy of Saxe-Coburg in 1806 Leopold went to Paris. Napoléon offered him the position of adjutant, but he refused. Instead he took up a military career in the Imperial Russian cavalry. He campaigned against Napoléon, and distinguished himself at the Battle of Kulm at the head of his cuirassier division. In 1815, Leopold reached the rank of lieutenant general in the Imperial Russian Army.

In Carlton House on May 2, 1816, he married Princess Charlotte Augusta of Wales, the only legitimate child of the British Prince Regent (later King George IV of the United Kingdom) and therefore heiress to the British throne, and was created a British field-marshal and Knight of the Garter. On November 5, 1817, Princess Charlotte was delivered of a stillborn son; she herself died the following day. Had she lived, she would have become Queen of the United Kingdom on the death of her father, and Leopold presumably would have assumed the role later taken by his nephew, Prince Albert, as Prince Consort of Great Britain, and never chosen King of the Belgians. Despite Charlotte's death, the Prince Regent granted Prince Leopold the British style of Royal Highness by Order-in-Council on April 6, 1818[1]. In honor of his first wife, Leopold and Louise-Marie of France, his second wife, named their first daughter Charlotte, who would later marry Maximilian to become Empress Carlota of Mexico.

On July 2, 1829, Leopold participated in nuptials of doubtful validity (a private marriage-contract with no religious or public ceremony) with the actress Caroline Bauer, created Countess of Montgomery, a cousin of his adviser, Christian Friedrich Freiherr von Stockmar. The 'marriage' reportedly ended in 1831 and the following year he married Louise-Marie at the Château de Compiègne, in Compiègne, France, on August 9, 1832.

King of the Belgians

After Belgium asserted its independence from the Netherlands on October 4, 1830, the Belgian National Congress, considered several candidates and eventually asked Leopold to become king of the newly formed country. He was elected on 4 June and accepted and became "King of the Belgians" on June 26, 1831. He swore allegiance to the constitution in front of the Saint Jacob's Church at Coudenbergh Place in Brussels on July 21, 1831. This day became the Belgian national holiday. Jules Van Praet would become his personal secretary. 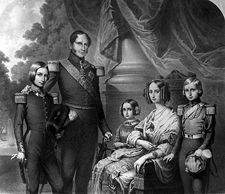 Less than two weeks later, on August 2, the Netherlands invaded Belgium. Skirmishes continued for eight years, but in 1839 the two countries signed the Treaty of London establishing Belgium's independence.

With the opening of the railway line between Brussels and Mechelen on May 5, 1835, one of King Leopold's fondest hopes—to build the first railway in continental Europe—became a reality.

In 1842, Leopold tried unsuccessfully to pass laws to regulate female and child labor. A wave of revolutions passed over Europe after the deposition of King Louis-Philippe from the French throne in 1848. Belgium remained neutral, mainly because of Leopold's diplomatic efforts. A conservative and traditional Catholic, he petitioned the Pope to appoint conservative bishops, which he did.[2]

On October 11, 1850, Leopold again lost a young wife, as Queen Louise-Marie died of tuberculosis at age 38. At 11:45 A.M. on December 10, 1865, the king died in Laken. He lies buried in the Royal vault at the Church of Our Lady, Laken Cemetery, Brussels, Belgium. He was succeeded by his second son, Leopold II.

Leopold's steady hand, wise diplomacy and constitutional governance enabled the small nation of Belgium to become one of the most prosperous in Europe. The choice of neutrality was less for ideological reasons (as a Catholic, Leopold believed that a just war was morally acceptable) than it was pragmatic. Belgium was a small country with borders that were shared by larger powers. Neutrality was a wise option. It meant, however, that Belgium did not spend huge sums on its military. Instead, an economy developed that was free from the need to finance a large military. After World War II, Belgium aligned itself with NATO and the Western alliance and was a founder member of the new European institutions, the Council of Europe and the European Union both of which aim to end war. Hosting the headquarters of the EU, Belgium is at the heart of Europe. The "modern prosperity of Belgium is," says Sheip, et al. "due to her freedom from great wars."[3]

The Arch of Triumph, started for the 1880 world expedition in Brussels, glorifies the "peace-loving nation of Belgium."[4] Leopold's legacy lives on in a nation that, while it does not advocate absolute pacifism, is strongly pro-peace. When Germany invaded Belgium in World War II, the United States President, Franklin D. Roosevelt denounced the "tyranny on peace loving Belgium" adding that "Belgium's cause is humanity's cause."[5] Subsequently, Belgium had made humanity her cause. 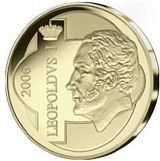