Cadmium (chemical symbol Cd, atomic number 48) is a relatively rare, soft, bluish-white metal. Its chemical properties are similar to those of zinc, and it is found in zinc ores. Unlike zinc, however, cadmium and solutions of its compounds are toxic and need to be handled with care.

This element and its compounds are used in electrical batteries, pigments, electroplating, plastics stabilizers, and many kinds of solder. In nuclear reactors, cadmium is used as a barrier to control nuclear fission reactions. Some compounds of cadmium function as semiconductors. 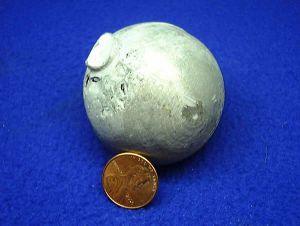 Cadmium-containing ores are rare. The only cadmium mineral of importance is Greenockite (cadmium sulfide, CdS), which is nearly always associated with sphalerite (zinc sulfide, ZnS). Consequently, cadmium is produced mainly as a byproduct from mining, smelting, and refining the sulfide ores of zinc. To a lesser degree, it is obtained from the ores of lead and copper.

Zinc sulfide ores are roasted in the presence of oxygen, thereby converting the sulfide to zinc oxide. To produce zinc metal, the oxide is either smelted with carbon or subjected to electrolysis in sulfuric acid. If the smelting process is used, cadmium is isolated from metallic zinc by vacuum distillation. If the electrolytic process is used, cadmium sulfate is precipitated out of the solution.[1]

Small amounts of cadmium, about ten percent of consumption, are produced from secondary sources—mainly from dust generated when recycling iron and steel scrap. Production in the United States began in 1907, but it was not until after World War I that cadmium came into wide use.

Cadmium (Latin cadmia, Greek kadmeia meaning "calamine") was discovered in Germany in 1817 by Friedrich Strohmeyer. Strohmeyer found the new element as an impurity in zinc carbonate (calamine), after he noticed that some impure samples of calamine changed color when heated, but pure calamine did not. The element was named after the Latin word for calamine, having been found in this zinc compound. For about 100 years, Germany remained the only important producer of the metal.

Although cadmium and its compounds are highly toxic, the British Pharmaceutical Codex from 1907 states that cadmium iodide was used as a medicine to treat "enlarged joints, scrofulous glands, and chilblains."

In 1927, the International Conference on Weights and Measures redefined the meter in terms of a red cadmium spectral line (one meter = 1,553,164.13 wavelengths). This definition has since been changed (see krypton).

Cadmium is a soft, malleable, ductile, bluish-white metal that can be easily cut with a knife. In the periodic table, it lies in group 12 (former group 2B), between zinc and mercury. In addition, it is located in period five, immediately following silver.

As an element in group 12, cadmium has traditionally been classified as a "transition metal." This view, however, has been changed, based on the current definition of transition elements stated by the International Union of Pure and Applied Chemistry (IUPAC). According to that definition, a transition element is "an element whose atom has an incomplete d sub-shell, or which can give rise to cations with an incomplete d sub-shell."[2] Cadmium does not fit this definition because its atoms and ions contain electrons that completely fill the d orbitals.

Image of the violet light from a helium-cadmium metal vapor laser.

Naturally occurring cadmium is composed of eight isotopes. At least three of them—110Cd, 111Cd, and 112Cd—are known to be stable. Two others have been observed to be radioactive, but with extremely long half-lives: 113Cd, with a half-life of 7.7 X 1015 years; and 116Cd, with a half-life of 2.9 X 1019 years. The other three—106Cd, 108Cd, and 114Cd—are predicted to be radioactive, but their decays have not been observed, as they too are expected to have extremely long half-lives.

Cadmium, its alloys, and its compounds have a variety of applications. About three-fourths of commercially available cadmium is used in batteries (especially nickel-cadmium batteries), and most of the remaining one-fourth is used for pigments, coatings, electroplating, and stabilizers for plastics.

Additional uses of cadmium are as follows:

Cadmium and its compounds are toxic.

Cadmium has no known function in the human body. This element and solutions of its compounds are toxic even at low concentrations, and they bioaccumulate in organisms and ecosystems. One possible reason for the toxicity of cadmium is that it interferes with the action of zinc-containing enzymes. Zinc is an important element in biological systems, but cadmium, although chemically similar to zinc, is not a healthy substitute for zinc. Likewise, cadmium may also interfere with biological processes requiring magnesium and calcium. Pathways of human contact include soil contamination from industrial releases or landfill and associated leachate processes.

Inhaling cadmium-laden dust quickly leads to respiratory tract infection and kidney problems, which can be fatal (often from renal failure). Ingestion of any significant amount of cadmium causes immediate poisoning and damage to the liver and kidneys. Compounds containing cadmium are also carcinogenic[7] and can induce many types of cancer.[8]

Cadmium poisoning is the cause of itai-itai disease, which literally means "ouch ouch" in Japanese. In addition to kidney damage, patients suffer from osteoporosis and osteomalacia (the equivalent of rickets among adults).

While working with cadmium, it is important to do so under a fume hood to protect against dangerous fumes. Cadmium-containing silver solder should be handled with care. Serious toxicity problems have resulted from long-term exposure to cadmium plating baths.